For way too long, RCB have made for a dreary, underperforming and languid setup. The side was lambasted and berated by its ardent supporters for failing to live upto its stature, a team which had never failed to repose the faith earmarked in it.

However, 2020 has been a year of aberrations and its seen the Royal Challengers Bangalore completely turnaround their laggard form. For time in years, the club has emerged as a force to be reckoned with, a side finally utilising the gamut of its worldclass players to canter their way into the echelons of the points tally.

Sitting as high as third place in the points tally, RCB will not only be looking to assert themselves of a spot in the playoffs today but also ease above Delhi in the league. A win today would fulfil all these aspirations, a narrative which will see the club come hot out of the blocks in this contest.

And it’s a contest RCB will hardly be asked to break into a sweat in. CSK had been a horrendous unit this season, a side which was ripped into shreds by Mumbai the last time around who went onto wipe the floor with them to canter to a 10 wicket win.

RCB will dominate CSK in akin fashion with this clash set to completely unravel in RCB’s favour.

Teams have started preferring to chase on this track off late with the surface hardly changing across the course of the 40 overs. However, afternoon conditions will improve the track for the batsmen to see the side winning the toss preferring to bat first today.

An afternoon clash means the sun baking the surface, a tie where the players’ fitness levels will be tested immensely.

This season has been one where AB de Villiers has yet again showed the world why he’s called the T20 player of the world. His ability to go after the bowlers and clean the ball out of the park has seen him come up with sensational knocks, ones which make him a must have pick for the contest.

Giving him company for the impending encounter is captain Virat Kohli. He remained unbeaten on 18 runs the last time around to take his side to an emphatic 9 wicket win to see him become the second selection from the club.

Devdutt Padikal smashed 25 runs in the same contest to continue in his consistent and flawless manner with counterpart Aaron Finch easing in next to him for the affair. CSK on the other hand see us opt for Ambati Rayudu and Faf du Plessis, two names who have still managed to offer some kind of solace in an otherwise horrid batting setup.

Reeling at 3-4 the last time around, CSK found themselves perilously in fear of being bundled out for under 50. However, Sam Curran had other ideas on his mind with the all-rounder once again emerging as his side’s finest performer with a 50 run knock.

Chris Morris just can’t be kept away from the wickets this term with his wicket to wicket line and length reaping massive rewards for him to see him be our pick from RCB.

The only spinner in contention for the purple cap prize this season, Yuzvendra Chahal has endured a solid season for RCB. The spinner’s deviations and ability to give the ball air saw him return with two wickets the last time around.

We have Navdeep Saini make an advent into our side as well from the club with being a match where he can finally break his wicket drought. Elsewhere, with him getting the ball to move around in the powerplay, we’ll be roping in Deepak Chahar from CSK for the encounter.

CSK Bat First: Kohli cherishes a chase to see him captain our side while AB de Villiers is the vice-captain.

RCB Bat First: The same picks as aforementioned with these two set to rip a sordid CSK bowling setup into shreds. 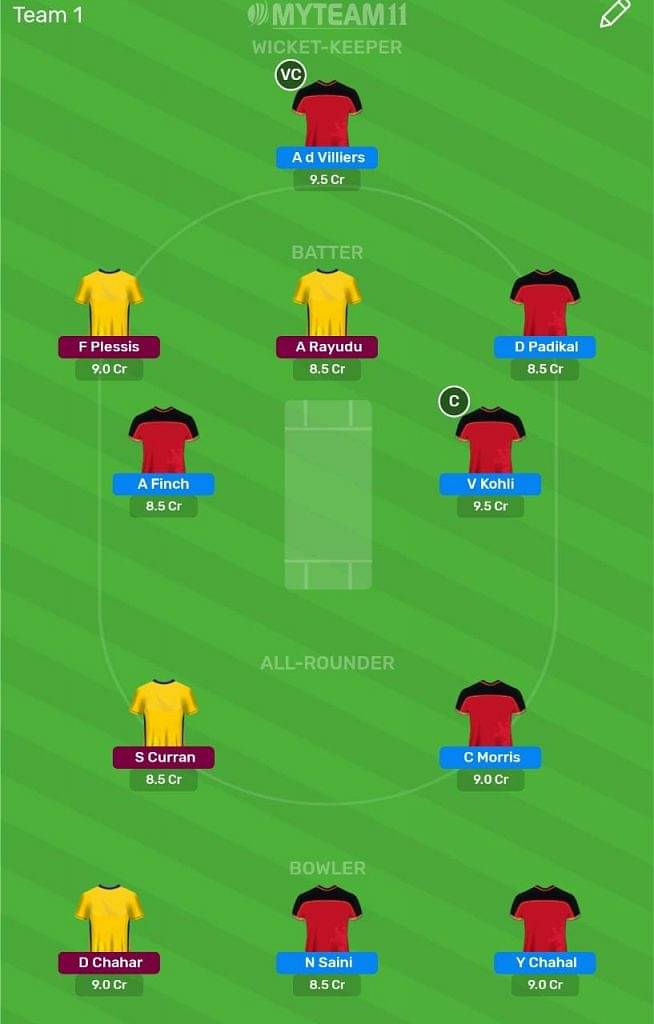