What’s going on in this Punjab side is not only inexplicable but exasperating at the moment. There has been a horrendous collapse not only from the side but the team management as well with botched decision making, playing combination and captaincy seeing the side sit right in the trenches of the points tally.

From persistently failing to understand what their best playing 11 is to making the same calamitous decisions on the field, the side only has itself to beat for its form this term. Unfortunately, this has been another typical season for the side with the club now becoming way too customary with inevitable failures every season.

What has been even more appalling is the complete refusal from the club to address the issues engulfing them. They threaten to make the club the first side to make an exit this term with another defeat today all but seeing them being thumped out of IPL 13.

Where Punjab have once again failed to punch above their weight, RCB for the first time in a long time are showing the stomach for a fight. In third place, they sit level on points with Mumbai and Delhi with five wins from seven.

The side has looked a transformed unit this time around, a team which will have little qualms in pulling off a win today.

With crucial time to work on the surface, this track should regain its identity from the opening exchanges in the league. However, the surface is bound to dwindle in the second part to make this is a wicket to come out and bat first on.

Winds have provided some relief in the evening but overall this will largely be a hot day.

On a wicket where the ball stopped before coming onto the bat, one where everyone settled to get going, AB de Villiers had no such predicaments. He showed why he’s considered such a stalwart of the game, packing the ball right of the ball as he stormed his way to a match winning half-century.

Punjab’s top scorer, KL Rahul was berated for his crawling 88 run knock the last time around but he’s managed to score on more occasions then not to see him be our pick from Kings XU Punjab. Nicholas Pooran has come alive, showing why he’s such a clean hitter of the ball to see him complete the one-two of selections from Punjab.

Virat Kohli was extremely slow the last time around on this track but importantly, he followed up his 92 runs with an unbeaten 33 run knock to make the RCB captain a must have pick for us. Opener Aaron Finch offered glimpses of his hard hitting form in the same contest, an innings which could finally propel him towards a colossal score come today.

Counterpart Devdutt Padikal has not only made massive inroads into the Indian cricketing fraternity but has fast established himself as a mainstay of his side’s batting unit with consistent and flawless performances.

Kings XI Punjab on the other hand see us rope in Mayank Aggarwal for this tie. He’s gone off the boil off late but this batting friendly track will allow him to open his arms and hit the ball in the middle to see him line up for us from the side.

With a clean bill of health, Chris Gayle is finally set to make a return for his side to see him complete our set of picks in this slot.

Chris Morris’ impact at RCB has been telling. He’s taken no time settling into his groove, a player who has had an instant impact with his five wickets in two clashes massively overhauling an underachieving bowling setup.

The wickets have dried up for Yuzvendra Chahal after an early outburst but Punjab’s ever willingness to throw their wickets away paired with the aberrations on this wicket the last time around see us make the legspinner our pick from the side.

Mohamed Shami meanwhile will make a foray into our side from the opposition given his guile and knowhow of the game.

KXIP Bat First: Kohli will cherish a chase on this surface to see him captain our side while Rahul is our vice-captain.

RCB Bat First: The enterprising knock AB de Villiers delivered the last time around see him captain our team while Kohli is the vice-captain. 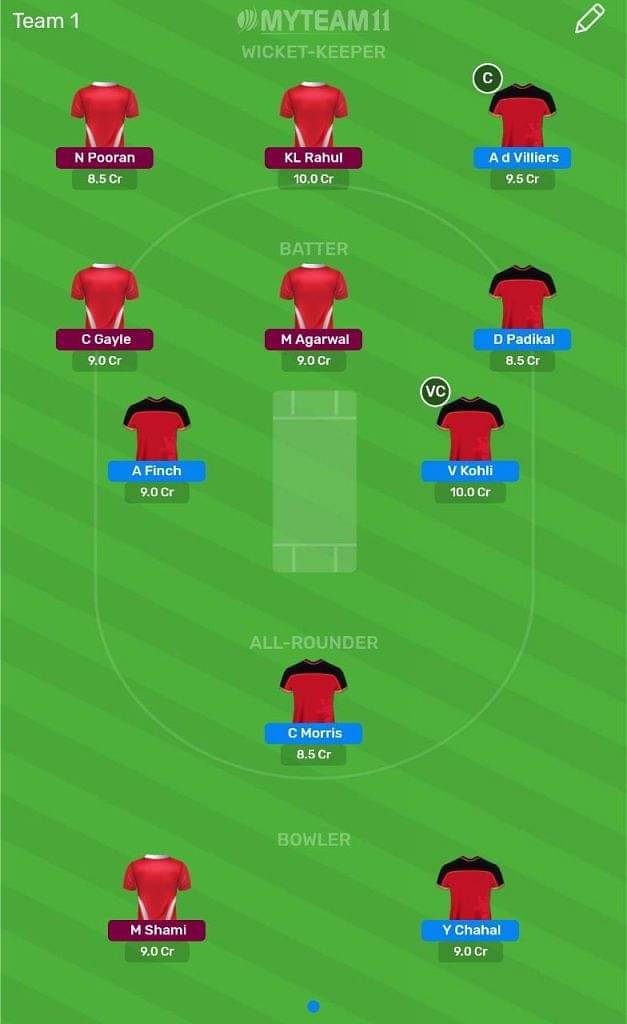 David Warner: The captain of Sunrisers Hyderabad witnessed his team losing a match which they…