With both of today’s opponents sitting on the two wins apiece from their respective three fixtures, this forthcoming showdown between the two makes for an intoxicating brew. The first contest of this Saturday, we are going to be treated in a cliff-hanger to get our weekend off and running to the pinch perfect start.

Also, with both the sides making an advent into this affair in the wake of opposing results, the stakes couldn’t be further elevated. Tasting their first defeat of the league the last time around as their two win spin was snapped, Rajasthan Royals will be hungry to quickly revert to winning ways.

At the end of the day, it was only Tom Curran who saved the Royals from what have been a potentially extremely embarrassing result. His late surge managed to take the side past 100 from a precarious 83-8, runs which could make all the difference in the culminating stages of the league stage encounters.

Royal Challengers Bangalore elsewhere will be venturing into this showdown having defeated Mumbai Indians in the second super over of the new season. Looking set to canter to a win at one stage, RCB ended up throwing their grip over the contest with Pollard and Kishan going on a rampage.

While they did manage to hold on to register the two points, the win once again epitomised how unstable this RCB side is. However, despite those qualms, they should manage to register a win today on s surface where their spin trio will peddle out a win for the side.

One of the trickiest surfaces to chase on, this has ideally been a wicket to win the toss and bat first on. The afternoon conditions will further hammer home that narrative with anything close to 180 being more than a sufficient total to win you the contest.

With this being the first contest to be played in the afternoon, excruciating heat will await the players out in the middle.

Sanju Samson ended up failing for the first time in the previous clash with his early demise having a direct impact on Rajasthan’s aspirations. It’s a narrative telling of how crucial he’s become for the side, a player who is fast making a name for himself in IPL 13.

Jos Buttler is yet to get going but he did offer glimpses of what he can do the last time around. With 21 quick runs, he showed why he’s such a daunting batsman to bowl to, someone who can easily come alive infront of this paper thin RCB unit.

AB de Villiers has gotten running right from match one this season. The South African is using the IPL to rekindle his career, showing why he’s so revered across the global stage with him topping RCB’s run scoring ranks.

Devdutt Padikal is taking a step further in his career this season. The RCB opener is showing why he is so deserving of the slot he’s been accorded with, scoring 54 runs in the bygone contest to showcase his credentials.

He set up a match wining stand alongside Aaron Finch who peeled off the 52 runs in the same encounter with the two openers laying down the foundation of a healthy target for MI. We have the side’s captain, Virat Kohli join up as well with this Rajasthan bowling unit being one he can rediscover his touch against.

Steven Smith played an innings he’s hardly associated with the last time around. Too eager to find the fence, he never really settled in but with two 50s prior to that, the RR bat is a must have pick for us.

Rahul Tewatia is turning into a really handful player for the Royals. His brand of spin earned him a wicket the last time he took to the middle and on a wicket where the ball will sing in the spinner’s hand, he could end up snagging wickets with ease.

RCB’s leading wicket taker, Yuzvendra Chahal has been the only constant in an otherwise horrendous bowling setup. He has 5 wickets in 3 matches, ones he’s earned with his willingness to lure the batsmen into going after him to induce the false shots.

And Chahal looks to have finally found the partner he was so yearning for. Adam Zampa came on and offered RCB a completely new dimension in his first match for the side, showing why he’s been so effective for Australia off late.

RR on the other hand see us reign in speedster Jofra Archer after his two wickets the last time around.

RCB Bat First: AB de Villiers can end up setting the stage alight with overs in hand to see him be our captain while Samson is the vice-captain.

RR Bat First: Samson steps in as our captain whilst AB de Villiers is the vice-captain. 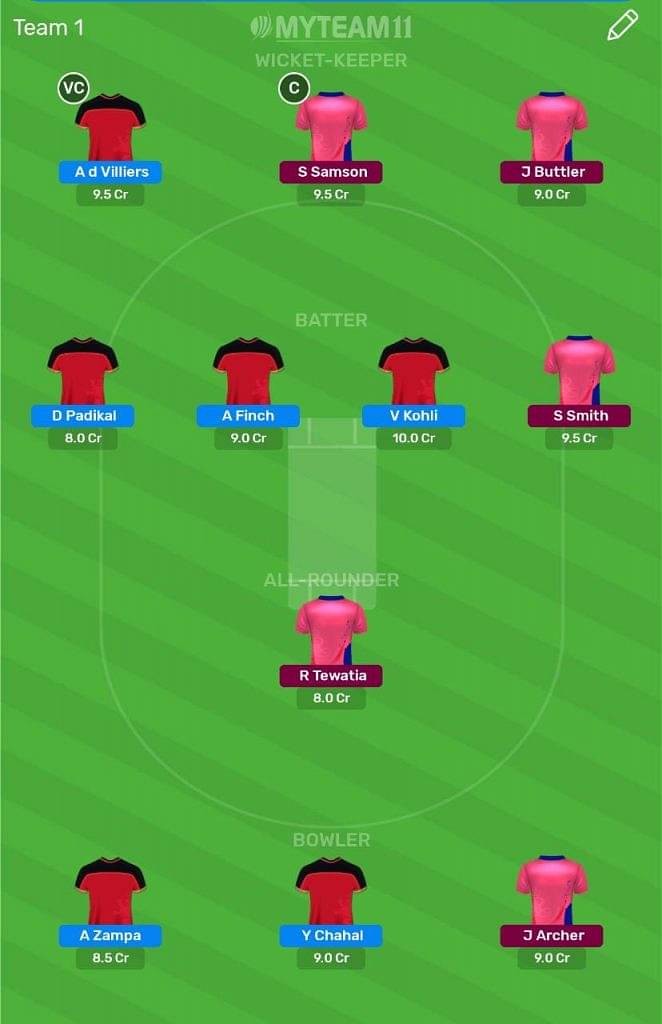