When Royal Challengers Bangalore took on Mumbai Indians the last time around in the IPL 13, the recently announced Indian team for the Australia series emerged as the biggest talking point ahead of the tie. And it was only rightful that the team selection took over the set of events unravelling in the showdown as well.

Yet again ignored by the BCCI and Virat Kohli, all the team was shrouded around Suryakumar Yadav on the day. And the discounted Mumbai batsmen ensured he once again laid down a real statement of intent with a match winning knock of 74 runs on the day, an emphatic performance which saw him not only silence his naysayers but slap them with every shot he sent packing to the fence.

What was the biggest takeaway from the fixture though was Virat Kohli and his horrendous and pathetic attitude when he finds himself on the losing side. Despite encouraging Suryakumar and handing him plaudits for his guile and resillinace, the RCB captain tried to engage himself in a spat with Suryakumar who was running away with the contest.

What stood out from the feud was Suryakumar composure with the player refusing to get embroiled in Kohli’s shenanigans. His resillinace, girt, poise and eloquent manner won hearts with people lambasting Kohli for his sorry approach towards his counterparts.

The defeat precariously also put RCB in a tight spot with the club’s chances of progressing through to the playoffs hanging finely in the balance. However, we do envision them making it into the playoffs come today owing to their brand of clean hitters.

Reverting back to its typical nature, this surface is once again emerging into a paradise for the batsmen. The pitch does tend to regress slightly in the second part to see the side winning the toss choose to peddle out a target here.

As is the tradition here, the temperature will be high to see hot conditions take over the contest.

Getting his first proper start for RCB the last time around, Josh Phillippe showed why he’s deserving of an extended outing in his side’s setup. He scored 33 runs in the opening slot, crucial runs which got his side off to a pulsating start in the powerplay period.

AB de Villiers is going to love the hardened surface and small boundaries to see him join up to make this docket about the picks from RCB.

Virat Kohli can try and belittle other players all he likes but that won’t disguise the fact that he’s been torrid this season. He was outfoxed by a Bumrah incoming bouncer the last time around to depart on 9 to see his sorry run with the bat continue.

What he’s done though is extend his stay in the middle and gobble balls to achieve runs which show him in a good light to see us bring the RCB captain in. Devdutt Padikal, RCB’s top scorer this season, hammered home a 74 run knock to see him join up.

Akin to last season, David Warner is once again emerging as one of the most consistent and dependable bats in the league. The SRH captain helped himself to a neat 66 runs the last time around to win the clash for his side.

Manish Pandey had 44 runs in the same encounter to see him comprise the duo from SRH.

Ever since Jason Holder has been brought on by SRH, he’s been an extremely influential figure for his side. He’s been amongst the wickets, strikes which have transformed an otherwise languid bowling setup.

Chris Morris was yet again RCB’s finest fast bowling option the last time around to see the South African retain his place in our setup.

T Natarajan’s pristine line and length has seen him earn a spot in India’s bowling setup. With the most yorkers to his name, he’s not only accrued wickets for his side but has picked up wickets at regular intervals as well as he reigned in two the last time around.

SRH Bat First: These conditions can see Warner end up with a gargantuan knock to see him captain our side while Devdutt is the vice-captain.

RCB Bat First: Devdutt has lit the IPL up with his ability to slash and hack at the ball, a skill set which makes him our captain while Warner is the vice-captain. 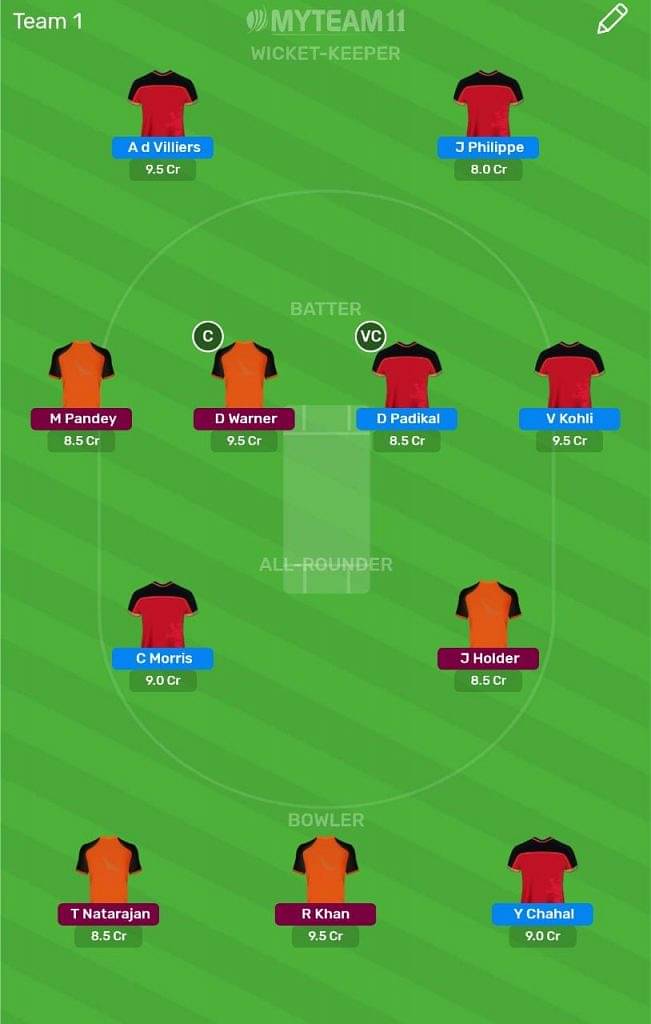