Ajinkya Rahane career: Will Rahane turnaround his fortune in the 4th Test vs England at The Oval?

Home » Cricket » Ajinkya Rahane career: Will Rahane turnaround his fortune in the 4th Test vs England at The Oval?

Ajinkya Rahane career: The Indian Test vice-captain needs more runs under his belt to justify his potential and silence his critics.

Virat Kohli led-Indian team is one of the most successful teams in Test cricket with 37 wins to their name. In the history of the format, only four other captains have better record than Kohli.

However, the same team has suffered catastrophic batting collapses in recent times which resulted in miserable totals of 36 and 78 against Australia and England respectively. There have been repetitive batting failures by Indian batters in the last four years especially in SENA countries.

One such problem of the Indian batting order is the batting form of vice-captain Ajinkya Rahane. Rahane’s returns have been disappointing to the extent that former cricketers namely Michael Vaughan, Farokh Engineer, Sanjay Manjrekar and Maninder Singh have all questioned Rahane’s form lately.

While Kohli’s deputy has a reputation of a saviour in tough conditions, him numbers speak of the otherwise. The 33-year old player has been unable to score a century in his last 18 Test innings. Agreed that Kohli himself hasn’t scored a century in the last 19 test innings but Rahane’s problems had started long back in 2016.

It was during a home Test series against New Zealand that Rahane’s average had peaked after as he scored a career-best 188 (381). After this series, Rahane has averaged 33.77 in 48 Tests. In the last 31 years, no other Indian top or middle-order batsman has averaged under 35 across a 48-match period in Test cricket.

The interesting thing about Rahane is that his average before the England series in 2016 was an excellent 51.37. The same has dipped to 40.18 after the third Test match of the ongoing Pataudi Trophy in England. Such a huge dip (11.19) in average talks about Rahane’s substandard show in Test cricket in the last four years. In the same period, Cheteshwar Pujara’s average has also decreased by 3.63, whereas, Kohli’s average has increased by 5.58. 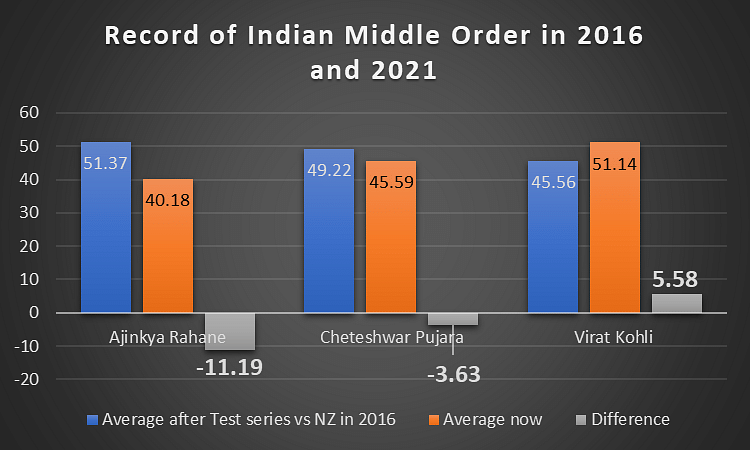 Despite his potential and reputation, Rahane has scored only one century in SENA countries since 2014. 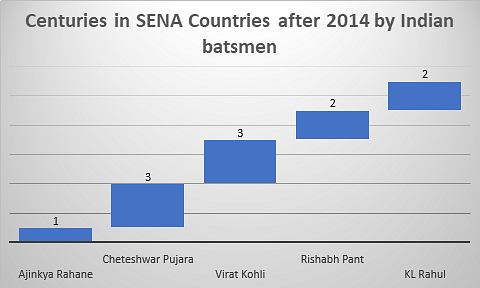 Having played 77 Tests, Rahane is one of the most experienced Indian batsmen but has often looked unsure and low on confidence. What has further not worked for Rahane in these years is his tentative footwork especially at the start of the innings.

Assuming that Rahane’s lean patch continues in the subsequent Tests, it wouldn’t be a surprise if his average drops below 40. For a batsman who used to average more than 50 at one point in time, such a dip is disheartening.

With India suffering a huge loss in Leeds primarily due to their batting failures, the Indian team management would be hoping for Rahane to contribute significantly in the next two matches for it will serve the dual purpose of meaning a lot for the team and Rahane.

"Kyrie Irving and James Harden deserve mentions on this list": Mike James believes Nets stars are alongside LeBron James and Michael Jordan on Mt Rushmore of most skilled scorers

"I've been preparing like the starter": Mac Jones Is Ready To Take The QB1 Role From Cam Newton