For today’s opponents, there won’t be a better outing for either side to end up with a win to its name. When these two sides go at loggerheads this Wednesday, either team finally has an akin appalling unit infront of it on the day in IPL 13.

Becoming the first club to make an exit from this edition of the league, Chennai Super Kings have undoubtedly been the most callous unit this season. The club’s apathy has been self born with a refusal to give fresh names an outing in the middle and persisting with old, worn out and finished names seeing the club being routed by almost everyone.

Deciding to give young players time in the middle the last time around, CSK ended up getting instant rewards for a gameplan which should have been adopted a long time back. The side ended up snapping out of its long, arduous and gruelling losing spree with an emphatic win against RCB, a performance the club will be eager to emulate today.

On a wicket where the better bowling unit will end up reigning on the day, we envision CSK holding a clear edge with the club set to register a second win on the bounce after the day’s affairs.

While the 200 plus score recorded on this track the last time around can largely be credited to Warner’s heroics on the day, the wicket played in the batsmen favour as well in the first part of the tie. Long boundaries and slightly improved batting conditions make this a wicket to come out and bat first on.

As has become the norm here, wing had failed to guise excruciatingly hot weather conditions.

Dinesh Karthik will majorly be making a foray into our side for a lack of better options on the day. Despite being in the midst of a turmoil, he continue to be handed over a number 4 batting slot by his side to make him an ideal pick here.

Dinesh’s decision to keep occupying the number 4 role has resulted in Eoin Morgan being bundled down the order. Its hampered his time out in the middle to see him scrounge for runs and fail to really express himself.

He did manage to accrue 40 the last time as he got overs to get himself set at the crease to see the club’s captain be the first pick in this ambit. Shubman Gill has been lambasted for his slow and languid approach but it’s one which got him to 57 runs the last time around.

Nitish Rana scored a match winning knock for his side not too long back last week to see him become the third pick from the club.

Long gone is the Faf du Plessis who was setting the stage on fire in the first part of the league. Like his side, he’s dwindled in form but he did show glimpses of that touch in his 25 run knock the last time around to see us rope him in.

Ambati Rayudu scored 39 in the same contest to see him canter his way into our side as well.

Not only is Sam Curran CSK’s best player this season but he’s fast emerging as the all-rounder of IPL 13. He had three wickets in his kitty the last time he stepped out, a spell which saw him yet again give batsmen a searing headache.

Sunil Narine has been horrendous with the ball this term but he’s capable of playing some lusty blows and creaming the ball to the fence to see us roll him in.

Deepak Chahar had two wickets on the day as well to see us opt for him from the side too. The opposition elsewhere see the enigmatic Lockie Ferguson maraud his way into our setup after yet another enterprising performance with the ball, one which saw him accrue two wickets against Punjab.

Counterpart, Pat Cummins partners up with him to wrap up our team for the affair.

CSK Bat First: Curran is doing a real job with both bat and ball this season to see us make him our side’s captain while Faf is the vice-captain.

KKR Bat First: The same picks as aforementioned with no other players really catching the eye. 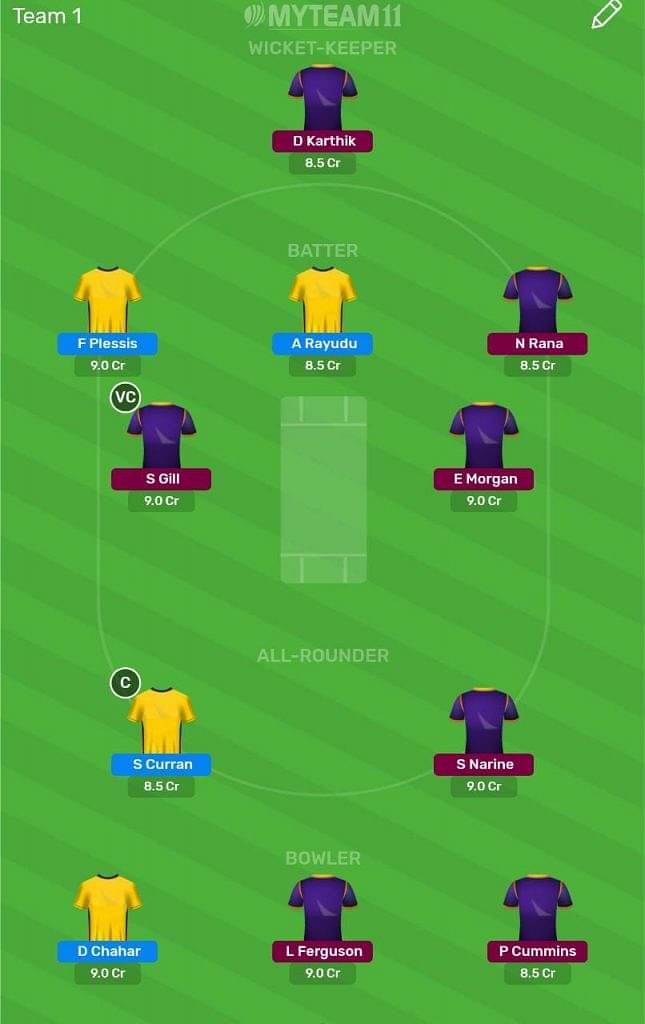