CSK Vs KXIP MyTeam11 Team Picks, Pitch Report, Probable Playing 11 And Match Overview: Must win fixture for Punjab as the club looks to keep itself in the hunt for a top 4 spot.

Defeated by the Royals the last time they took to the middle, for Kings XI Punjab, today’s fixture takes on the identity of a must win tie. A defeat for the club would see them be asked to pack their bags and head for the exit door, a dilemma the club will be eager to veer clear of.

Up against Rajasthan the last time around, Kings XI Punjab ended up losing out on a tie which could have easily swung in their favour. Despite piling a hefty target for their opponents, lacklustre bowling, wayward captaincy and a completely failure to stop leaking the runs lead to the side losing a side which could have easily shifted in their favour.

The result not only curbed the side’s five match winning spree, snatching the momentum they had worked so hard for but also takes their destiny away from them now. The set of events make the need for a colossal win today all the more important, a clash Kings XI Punjab need to thrust every last bit of resources they posses into.

A dicey affair to determine with both the teams more then capable of cracking under pressure, we envisage Punjab’s better batting unit taking them to a win today.

As the matches have traversed on this surface, the norm has slightly shifted. With the surface not changing much as the clash has run down its course, teams have preferred to chase with a coherent idea of how to navigate their way to the score at hand.

The afternoon period will see the sun roast the players who’ll be left drenched in sweat on the day.

A massive reason for Kings XI Punjab losing their bygone encounter was due to KL Rahul. At a time when Gayle was clearly everything to the fence, the Punjab wicket-keeper was more interested in slowly down the run-rate for his own goals.

What matters from the game’s perspective is that he had 46 runs to see us opt for him. Nicholas Pooran played a scrumptious 22 run cameo to accrue crucial runs for his side to see him be the second pick from the side.

Extremely unlucky to miss out on a well deserved 100 the last time around as Archer cleaned him up, Chris Gayle’s misery was worsened when his 99 run knock ended up on the losing side. However, he’s bound to come back hard today, a player who has set the league alight ever since his return.

CSK on the other hand will see us rope in an entire trio from the club for the day’s encounter. We begin with Ruturaj Gaikwad who has silenced CSK’s bemusing decision not to play young players with two decisive knocks for his club.

Shane Watson could easily be playing his final T20 tie today, one he will be looking to make an affair to remember. Completing the set of picks is Ambati Rayudu who has managed to get himself in the mid-thirties every time he’s taken to the middle.

Sam Curran’s versatility this decision has seen him emerge as CSK’s finest player in IPL 13 to see him be our first pick from the club in this slot. Ravindra Jadeja reminded everyone of his abilities with a match winning blitz the last time around, one which saw him earn a win for his side out of nowhere.

Mohammed Shami was handed over the responsibility of leading his side’s fast attack and he’s done every bit he’s been asked to. The club’s leading wicket taker, his ability to send down any type of a delivery has seen him emerge as an extremely daunting bowler.

Ravi Bhisnoi links up with him given the nature of this track while CSK will see us opt for Lungi Ndidi who had two wickets on his return for the club.

KXIP Bat First: The manner in which he’s connecting the ball currently see us make Gayle our captain while Rahul is the vice-picks.

CSK Bat First: The same pair as aforementioned with their being no better names to turn to. 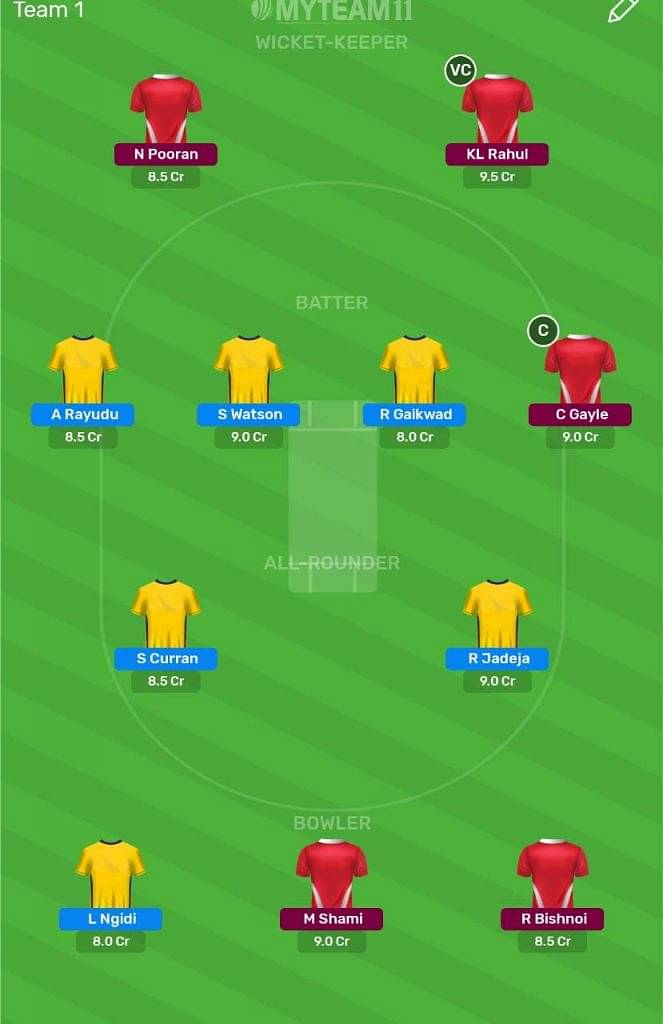 "As far as I know it's done"- Dana White Makes Conor McGregor Vs. Dustin Poirier Official; Is It For The Vacant Lightweight Belt?