CSK Vs MI MyTeam11 Team Picks, Pitch Report, Probable Playing 11 And Match Overview: Having run their race this season, CSK down tools for the remainder of the season.

For only so long can luck continue to be at your side. Having pushed their luck for way too long in the Indian Premier League, Chennai Super Kings finally saw time catch up with them with the team becoming the first club this season to make an exit from the playoffs race.

Embarrassed by Rajasthan the last time they took to the middle, Rajasthan’s seven wicket defeat was the perfect testament of their plight this term. Mustering a measly score of little over a 100 on the day, CASK were equally dismal with the ball as well with the side failing to make its early three strikes count.

The result saw them get out of the race of the 13th edition of the league. Its been a predicament which has solely fallen on the team management’s shoulders with the side taking inexplicable decisions be it from team selection to making decisions on the field.

This is just the side for Mumbai to take on as they look to recover from their super over defeat the last time around. This is a foregone conclusion, one where CSK will be nothing but bystanders on the day.

A good amount of time to work on the surface should see this track revert to its original nature. Short boundaries plus a nice hard wicket will see the side winning the toss step out to bat first without any qualms.

Usual hot conditions at play today with inclement weather conditions being the norm of the day.

Having now settled into his groove, Quinton de Kock just can’t stop scoring runs. The Mumbai Indians wicket-keeper has taken the league by a storm, smashing the ball to every part of the fence to see him be a must have pick for the tie.

Where Quinton is back to his best, captain Rohit Sharma is still struggling for form. However, these are ideal conditions for the opener to finally get bat onto ball and show why he’s held in such high stature.

Suryakumar Yadav will partner him up for the contest while CSK will have an entire triad being inducted into our team. We begin with Faf du Plessis, the team’s top scorer, a bat who was waged a lone battle for his side.

Opener Shane Watson is capable of going on a rampage to see him link up along with Ambati Rayudu whose personal goal of filing his shoes with runs are set to see him extend his stat at the crease.

Sam Curran getting the one over against Rajasthan joined a pile of exasperating decisions from CSS this season. He still managed to continue in the affair with 22 runs with the opening slot doing a world of good to his role as a batsmen.

In dire need of quickfire runs the last time around, Kieron Pollard came to Mumbai’s rescue. Despite not getting a bat for a string of matches, he needed no time to catch his eye in the middle as he schooled the bowlers to pile on 34 runs.

Jasprit Bumrah yet again showed the world why he’s India’s premier fast bowler. His wicket to wicket line an length under a pressure situation saw him snare three wickets to force the contest into the super over.

Trent Boult was peeled for runs in the same affair but he’s a worldclass name, someone bound to come back stronger from that tie. CSK on the other hand will have Deepak Chahar find a place in our side after his two wicket haul against Rajasthan.

CSK Bat First: Quinton’s 58 run knock from the bygone affair makes him an instant pick for our captaincy while Rohit is the vice-captain.

MI Bat First: The same names as above with us envisaging the two openers making a mockery of the opposition. 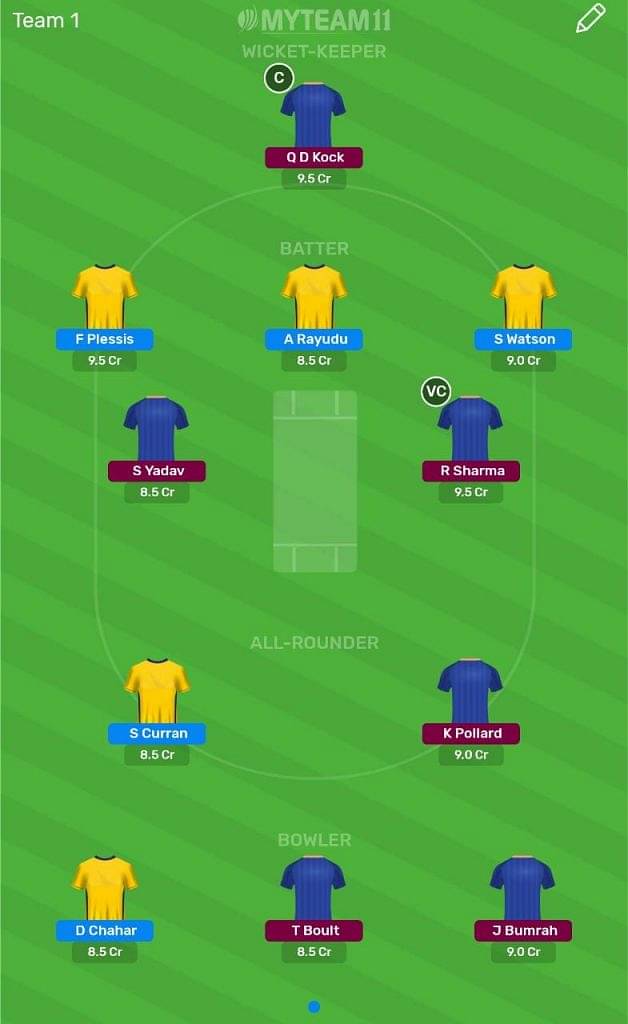