CSK Vs RCB MyTeam11 Team Picks, Pitch Report, Probable Playing 11 And Match Overview: Troubles mounting on a CSK side which has looked least interested in addressing its lopsided playing 11.

This season is coming to an early end of CSK. Rather than a cricketing team, this side has taken on the shape of a retirement house, a team made up of tiring legs who are just biding their time away towards the tailend of their careers.

What has been even more flabbergasting is the team management’s decision to do away with names who have clearly run their race. Rather than handing over the mantle to new young names, testing the water with them, the club has decided to keep sticking around with the same bunch of languishing cricketers.

And the side has paid a contentious price for the move the last time around. Despite being in a commanding 90-1 in their run chase, the team threw the tie away with Jadhav proving to be a stumbling block for the side as he devoured 12 balls for a measly 7 runs to result in a 10 run defeat for his side.

RCB are making a foray into today’s encounter in the wake of a defeat as well. The side floundered in its run chase against Delhi Capitals, losing wickets way too often to ultimately fall well short of the target at hand.

Today’s encounter is going to be determined by the better batting setup. And its this docket where RCB just about edge CSK with these runs set to guide them towards a win.

A nice, barren and hard wicket, this is a track where the batsmen are going to love lying their skill set on. Its been a surface to bat first on with runs on the board resulting in added pressure for the chasing side as the surface slows down eventually.

A slight reprieve in the usually hot conditions owing to the bouts of winds set to come gushing in.

AB de Villiers was a must have pick for us today. With CSK offering nothing in the bowling unit in the middle period, the RCB wicket-keeper can on a carnage today and clean CSK’s bowling unit right out of the park.

Virat Kohli’s 43 runs against Delhi did more harm to his side than good. The RCB captain played way too laggard a knock, one which saw the run rate rise up and steadily spiral out of control for his side.

However, he does look to be getting back amongst the runs gradually to see him line up for us. Opener Aaron Finch has offered little this season to justify RCB’s move to opt for his services but CSK’s paper thin fast attack can see Finch accrue crucial quick runs.

Devdutt Padikal has been the find of the season for RCB with the opener showcasing the gamut of his expertise to make him a must have pick for us.

CSK on the other hand see us indulge in the services of a duo. We begin with Shane Watson whose come back strongly across the last two affairs, scoring two 50s on the spin to show that he still has it in him.

He’s partnered up by Faf du Plessis, the side’s mainstay in the batting order and their leading run getter this season.

In a drab CSK side, Sam Curran has managed to emerge as a silver lining. The England young name is showing why he’s considered such an exciting talent with him not only snagging two wickets the last time around but scoring a 17 run cameo as well.

Set to partake in his first contest for RCB today, we have Chris Morris make an instant appearance in our setup. Not only can he pitch the ball in the right areas to induce false shots but is more than capable at wielding the bat as well.

Yuzvendra Chahal is truning out to be way too inconsistent. Its largely down to his brand of bowling, one where he relies on the batsmen to fall prey to his bait.

However, despite his inconsistency, he still finds a place in our setup. He’s capable of raking in a bevy of wickets once he gets going.

Partnering him up is Isuru Udana. He’s provided stability to a dwindling RCB attack, someone whose ability to get the ball to hit the right line and length has seen him pick up atleast the one wicket in every affair.

Shardul Thakur returned with two wickets the last time around to see him be our lone pick from CSK for this one.

CSK Bat First: Faf is in too imperious a form at the moment to see him be our captain for the day while AB de Villiers in the vice-captain.

RCB Bat First: AB de Villiers can go wild with overs under his kitty to see him captain our side while Faf is our vice-captain. 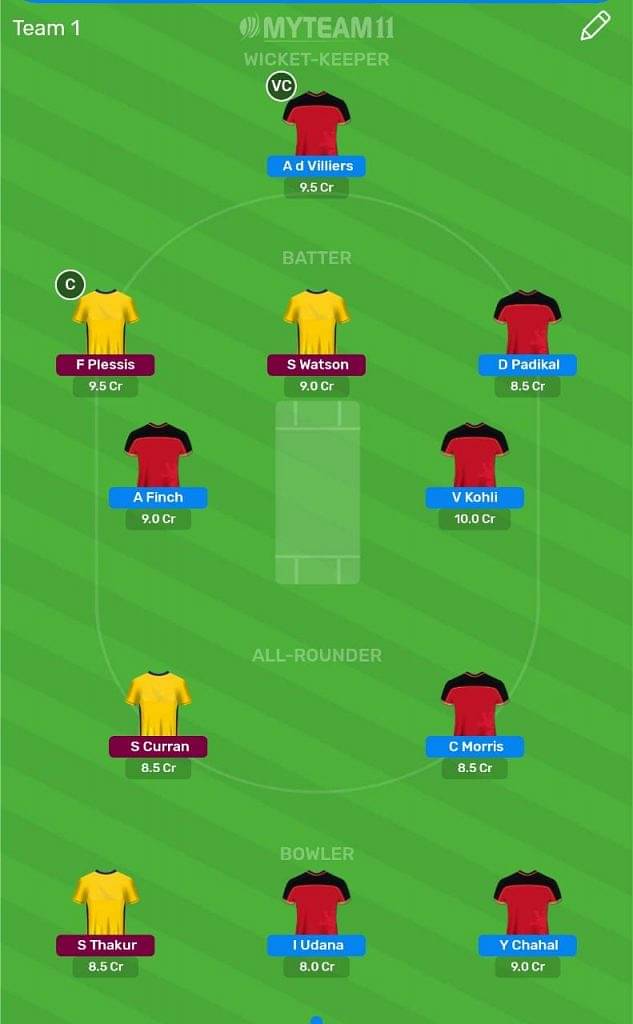