CSK Vs RR MyTeam11 Team Picks, Pitch Report, Probable Playing 11 And Match Overview: Either team eyes a late surge with time running out and running out fast for either setup.

Rajasthan Royals have been the culprit of their own undoing this season of the Indian Premier League. The side has no one to blame for its aberrations but itself, a team whose persistent refusal to sit down and do away with underperforming players has come to bite the side in the 13th edition of the league.

The best testament of the aforementioned narrative was in the side’s foregone defeat to RCB. Cruising to a win at one stage as they defended their total impeccably, Rajasthan saw Unadkat come in and ruin their plans as AB de Villiers ripped into him, hitting him for three successive sixes to steal the match right from under Rajasthan’s noses.

It was a horrid and shambolic collapse from the club, one which saw them fall apart like a house of cards. The result sees them clutching at thin straws now as they vie for a place in the top 4, slots which are ever growing distant for them with each passing defeat.

Akin to RR’s defeat was CSK’s loss the last time around. Looking good for a win, shambolic decision making saw the side hand over a won match to Delhi to put the side in a perilous spot, one where making the top 4 makes for an extremely behemoth task.

Given the ramifications stemming from the contest, we should be in for a lively contest today. The sparks will fly in this one with us envisaging the Royals slightly better batting unit taking the side to a win.

Not the easiest of surfaces to come out and chase on, the side winning the toss is bound to come and set a target with the wicket only developing cracks and opening up for the spinners in the second part of the affair.

Usual hot conditions at play today with inclement weather conditions being the norm of the day.

Like the Royals, nothing has clicked for Jos Buttler this season. His side’s decision to demote him to number three didn’t work either but he’s someone more than capable of piling on the runs once he gets going to see us repose faith in him.

The best batsmen are defined by the ability to bounce back when the chips are down and Faf du Plessis did exactly that the last time around. After a couple of failures, he returned to his immaculate best against Delhi, top scoring with 58 runs to make him a must have pick for us.

Shane Watson has emerged as a steady source of runs along with Ambati Rayudu. The two have been laborious in their style on play but have decided to stick it around and grind out crucial runs to make the duo our pick from the side.

After a hoard of abject knocks, Steve Smith showed what he can do once he’s applied himself to the middle. He put on a real show the last time around as he piled on 57 runs in the middle to see him be our first pick from Rajasthan.

Why Rajasthan have refused to bowl Ben Stokes on slow wickets is something out of our realm of understanding. However, with an opening spot, he makes for a more than viable pick for the contest.

Yet again this season, Rahul Tewatia came up with a performance of note as he made the most of his ability with the bat to register quickfire runs for his side.

Akin to Stokes, Sam Curran has been promoted into the opening role by his team as well and with a full quota of four overs with the ball as well, he makes for a must have pick.

Shardul Thakur is hardly the most effective of bowlers but his dwindling brand of bowling lures batsmen into going after him to see him induce false shots in them,

This is a surface which will favour Karn Sharma to see him make a foray into our side from CSK as well while Rajasthan’s top wicket taker, spearhead Jofra Archer will be representing us from the side for this one.

CSK Bat First: His 58 runs against Delhi make it prudent to opt for Faf as the day’s captain while Steven is the vice-captain.

RR Bat First: We are going to be sticking with Smith as our captain after his 50 the last time around while Faf is our vice-captain. 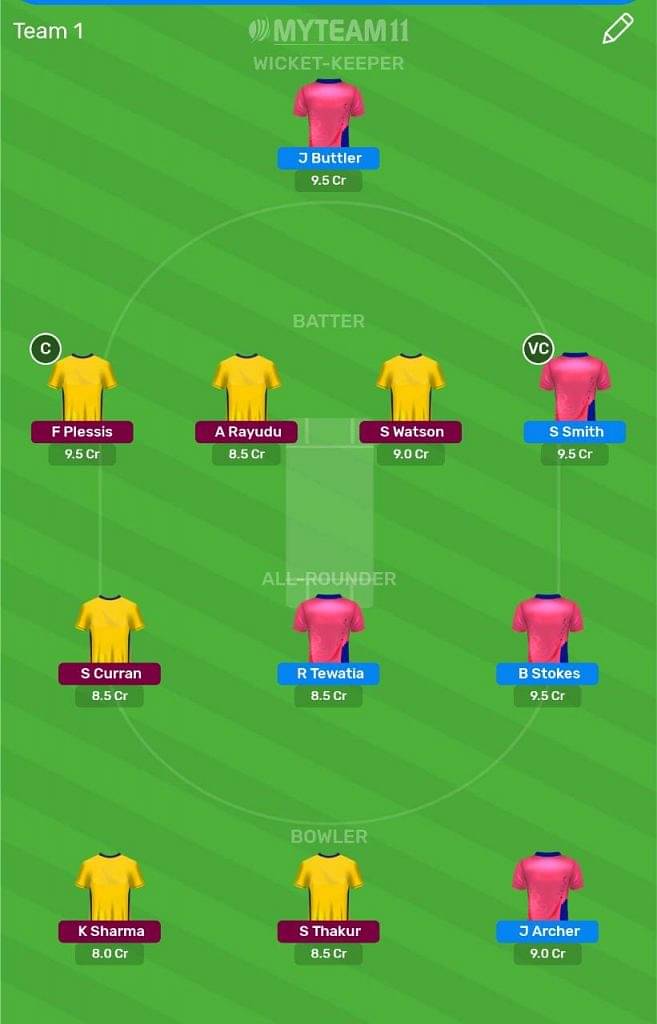