Description: CSK Vs SRH MyTeam11 Team Picks, Pitch Report, Probable Playing 11 And Match Overview: After two wins on the bounce, SRH pull back to register their elusive win in the league.

Failing to register a win in two straight fixtures, Sunrisers Hyderabad finally pulled out of the impasse they found themselves in the last time around. Registering their first win of IPL 13, the side finally got off the mark with a clinical and complete outing against Delhi Capitals.

Finally getting their combination right for the first time this season, SRH showed why they have been the most consistent side in the league for the foregone three seasons. Equipped with one of the deepest batting units and a well versed bowling setup, the side makes for a daunting opponent for a crumbling CSK side today.

After winning their opening contest against Mumbai Indians, CSK slipped to two defeats on the bounce. It sees the club sitting right in bottom spot as things stand, a team which will be looking to overhaul its stuttering form when it returns to the field after a much needed hiatus.

The arduous and gruelling schedule they found themselves in the last time around was too much for CSK to compensate for. The break couldn’t have come at a better time for the club, not only according them with much needed time away from the league but also allowing much needed leeway to injured players to recover.

They are bound to hit back hard today but their paper thin batting unit will lead to their demise today.

A wicket to come out and bat first on, this is a narrative which couldn’t have been furthered hammered down on than the fact that the side chasing has lost all clashes here. This is a surface which does reward strokeplay in the first part before the surface starts to regress with the spinners coming into effect.

Much like the opening exchanges, this will be yet another typical hot day.

Jonny Bairstow might have been left out of England’s forthcoming test team for the year but the country’s wicket-keeper is showing why he’s in such sensational touch in white ball cricket. He struck his second half-century of the league the last time around, a solid performance which makes him a must have pick for today.

Partnering up with him is his counterpart and the side’s captain, David Warner. Warner helped himself to a neat 45 runs in the same encounter with the two moving in unison to stich together a crucial opening stand for the side.

Out for two ties, Kane Williamson returned and instantly showed why he’s considered such a staunch name in the game. His 41 runs came at a crucial juncture in the encounter, ones which provided a late surge to his side’s total.

Manish Pandey faltered the last time around for SRH but that won’t deter us from opting for him. He has 88 runs till now, a player who has a steady source of runs for the team at number 3.

Back after an injury which saw him miss two encounter, Ambati Rayudu slots his way into our setup as well. He had 71 runs against Mumbai, a performance which sees us coax him into our side.

In a batting unit which has offered nothing, Faf du Plessis has come across as a massive source of solace. The most dependable name for the side, he’s held fort at one end to register the two 50s and 43 runs in three encounters.

Opener Shane Watson is struggling to settle into his groove but he is capable of peeling the bowlers to the fence to see him complete our triad from the side.

Why Punjab decided to let Sam Curran go is something which is truning out to be an even more inexplicable decision given his form for CSK this term. He’s pulled off 6 wickets in 3 clashes to emerge as the side’s leading wicket taker in the opening exchanges.

Rashid Khan ended up wiping the floor with Delhi the last time around. His man of the match performance saw him snag three wickets on the day with his line and length leaving Delhi in a quagmire.

CSK on the other hand see us make Piyush Chawla the first pick for the scrimmage. With two wickets the last time around, he showed why he is still considered a tricky bowler to get away, someone who will hold a crucial role for the club on this surface.

Partnering him up is Deepak Chahar whose variations and ability to send down the slower one are bound to see him get the ball to skip and hop over here.

CSK Bat First: Faf’s sensational consistency sees him be our captain for today while Jonny is the vice-captain.

SRH Bat First: Bairstow will make the most of the free hand he’s accorded early on to see him be our captain while Faf is the vice-captain. 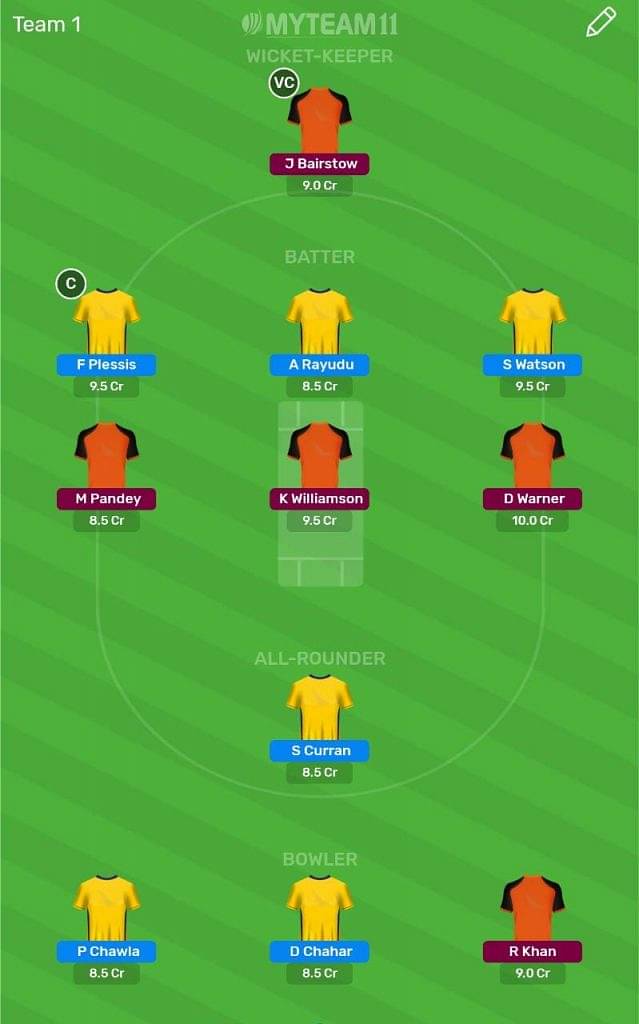