DC Vs BLR MyTeam11 Team Picks, Pitch Report, Probable Playing 11 And Match Overview: Cracker of a thriller awaits us today with the winner of this encounter progressing to the playoffs.

At the halfway mark of the Indian Premier League, Delhi Capitals and Royal Challengers Bangalore were being touted as two potential finalists this season. Both the sides were tearing the league apart as they held a runaway lead atop of the points tally, clubs outright favourites to make it to the playoffs.

Come their final league stage encounter today and both these sides are now fighting for survival in the league. Both the clubs have gone onto lose three successive fixtures, results which leave either side in dire need of a win today with the loser of this encounter making an exit from IPL 13.

These two sides have only themselves to blame for their horrific collapse in the showpiece league. Both have regressed due to akin reasons with the team combination, lacklustre captaincy, inexplicable decisions on the field and a complete lack of game awareness costing one side a spot in the top 4 of the points tally.

Given the horrific decline in form these two clubs are in, determining a winner from this clash is an extremely dicey affair. What favours Delhi is their better bowling unit, one capable of striking at regular intervals, a contingent which should win the contest for the club.

As the matches have unfolded over here, teams have preferred to come out and chase. The surface doesn’t change massively and with the dwindling temperatures seeing the ball be drenched in the second part, the side winning the toss has preferred to field first.

Little changes on the weather front with the conventional heat set to take over.

Whenever AB de Villiers has batted out in the middle alongside Kohli, his game has massively floundered. It was visible the last time around as well as Kohli held him back to see AB de Villiers end up with just 24 runs.

However, he’s way too good a player to let out of our hands to see us reign him in as ever. Josh Philippe has now made the most of his two successive outings with a stupendous 32 run knock against SRH to see him become the second pick from the club.

Delhi’s Rishabh Pant has been lambasted for his complete lack of acumen since his arrival into the game and this season he’s shown why so many have berated him. He is capable of hitting some lusty blows though and this RCB bowling unit will be an ideal unit for him to take apart.

You can be a blabbermouth all you want but as long as it doesn’t translate into performances, it means nothing. For all of his whims and fancies, Virat Kohli has been a dejecting failure on the field for RCB this term.

He is capable of hitting form quickly though to see us stick with him. Joining up is RCB’s top scorer this season, opener Devdutt Padikal, a player who has won us over with his clean brand of hitting.

Delhi Capitals’ Shreyas Iyer has failed to justify his role as captain of the side. He’s failed in both his roles but does have a tendency to grind out runs in the middle to see him make a foray into our side.

After two centuries on the spin, opener Shikhar Dhawan has now been dismissed for 0 in two encounters. Its been that kind of a season for him, one where he’s never managed to embark on a meaningful spree but his two centuries see us repose faith in him for the day.

Although the wickets have dried up for Chris Morris after a pathbreaking start this season, he continues to remain RCB’s biggest threat as a quick bowler.

From taking a wicket in 25 clashes on the spin to now going wicketless in two encounters, Kagiso Rabada’s slight dip in form has had an adverse impact on Delhi’s form as well. The fast bowler hardly fails for a lengthy period though and with RCB’s batting unit being a jittery unit, Rabada was an instant pick for us.

Counterpart Andrich Nortje has been amongst the wickets in every outing to see him become the second pick from Delhi. RCB as ever meanwhile will see spinner Yuzvendra Chahal line up for us after his two strikes for the club against SRH.

RCB Bat First: Shikhar can make the most of a run chase to see him captain our team while AB de Villiers is the vice-captain.

DD Bat First: Kohli thrives in a chase to see him be our captain for the contest while Dhawan is the vice-captain. 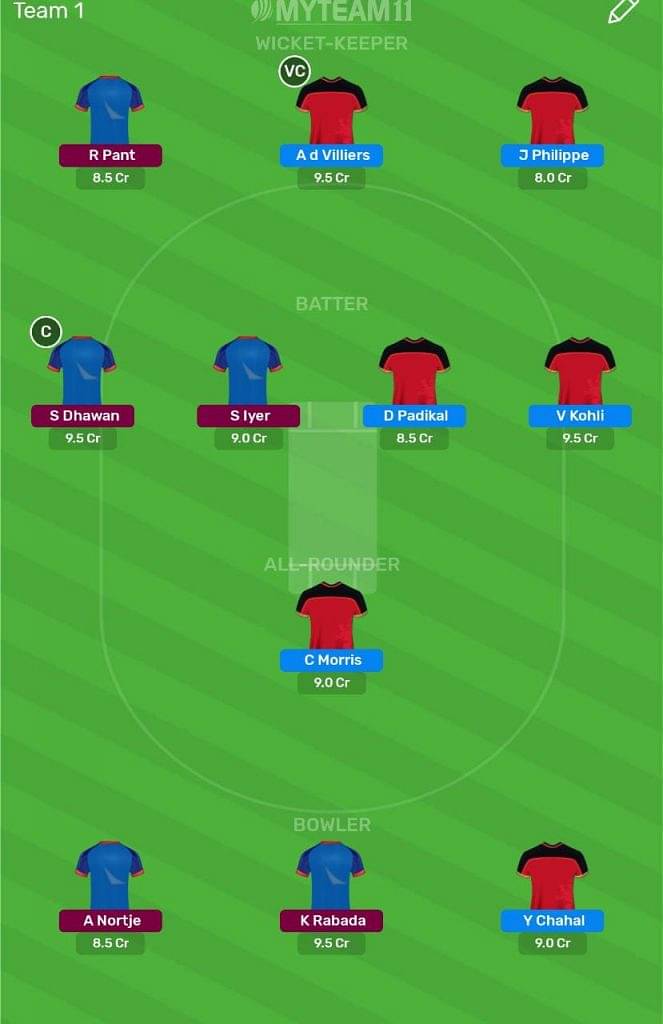