DC Vs CSK MyTeam11 Team Picks, Pitch Report, Probable Playing 11 And Match Overview: Delhi look to ease one step closer to asserting a place in the top 4 for themselves.

After years of persistent failures, underperforming and dwindling in the points tally, Delhi Capitals are finally flourishing in the IPL. This side has gone onto torch its way into the echelons of the points tally, a team which has heralded its way a staggering 6 wins from 8 matches.

What has been most impressive is the manner in which the side has refused to just lay over and give up on matches this season. The pace duo of Nortje and Rabada has been the focal point of Delhi’s consummate success this season, a duo which moved in tandem to blow apart Rajasthan and ensure Delhi were able to rummage a second win against their neighbours.

The team has emerged as one of the outright favourites for this edition’s title, a side which will be looking to keep its winning spree intact come today. And on a wicket cut out for the batsmen, we envisage Delhi’s better bowling strength peddling out another triumph for the side.

CSK might be managing to keep themselves alive in the league at the moment by clutching onto the barest of straws but the side has largely offered nothing. Flickering performances won’t keep the team’s aspirations of making it into the top 4 alive for long and the side will further see cold water poured upon those ambitions with a defeat today.

The most sublime track in the league, this surface has felt the brunt of cricket. The surface has slowed down and will today as well but largely, this surface will continue to a paradise for the side coming out to bat first.

Usual hot conditions await the players on the day.

Pant underwent a fitness test but he failed to clear out and with no go ahead, Delhi Capitals are set to roll out Alex Carey once again. While he’s failed to make the most of the two outings till now, he’s someone whose expertise is well documented to see us opt for him today.

After a string of inconstant showings, Shikhar Dhawan looks to be back at his best for Delhi. The side’s opener has been electric for the side across the last two affairs with his runs against Rajasthan making all the difference at the end of the day.

Akin to him, captain Shreyas Iyer has finally settled into the middle as well to emerge as a steady source of points to see him link up as well. Prithvi Shaw will wrap up our triad from the side while the opposition sees us indulge in a trio as well.

We begin with Faf du Plessis, someone who will be hungry for runs today. He’s gone off the boil recently but has still managed to remain his side’s top scorer, someone who can rake up the runs on this solid batting surface.

Opener Shane Watson will accompany him along with Ambati Rayudu, two names who have moved in unison across the last two ties to help overhaul the side’s waning form with the bat.

Sam Curran was asked to open for his side the last time around and the England all-rounder fit into his role instantly. He was explosive right from the word go, opening his arms with panache to slash at the ball and hack at the bowlers to cajole his way a vibrant knock.

Delhi on the other hand see us rope in Marcus Stoinis, a player whose impact at the club has been telling with the both the bat and ball.

Anrich Nortje put on a show of pure fast bowling against Rajasthan, one which will be long remembered. He touched the 156 km/h, sending down the fastest delivering in the IPL till date, a spell which persistently saw him break the 150 km/h barrier.

Kagiso Rabada was solid as ever for the side on the day, once again running rings around the batsmen with batsmen with his rippers to see him form the one-two of picks from the capital team.

DC Bat First: Shreyas’ form with the bat currently sees us make him our captain for today while Dhawan is our vice-captain.

CSK Bat First: Faf will love a free hand on this track to see him be our captain while Shreyas is the vice-captain. 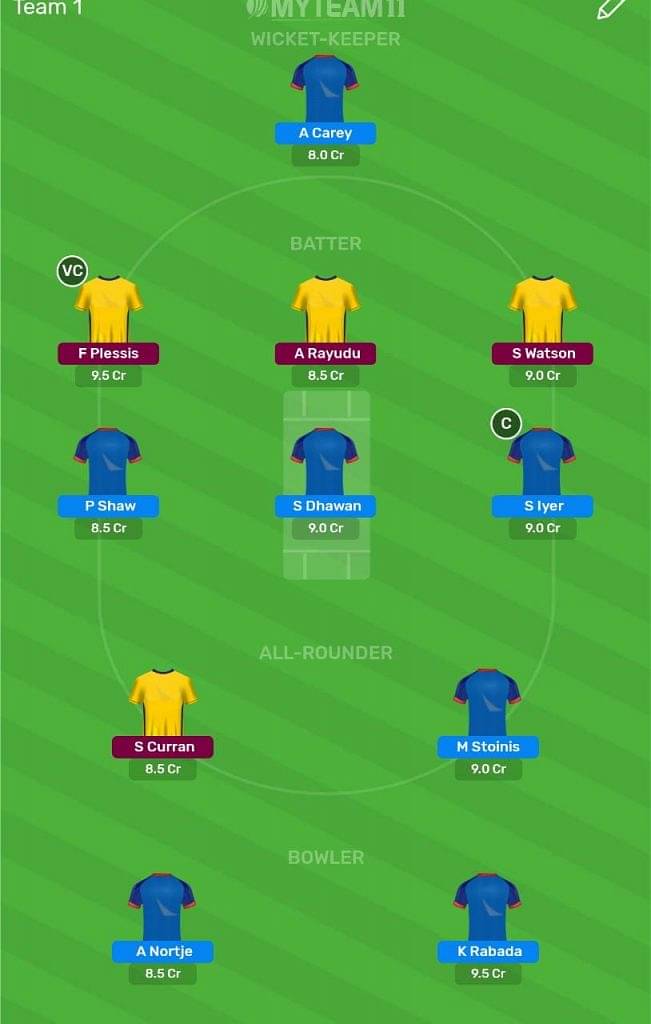