After registering two wins on the bounce, things were quick to take a tumble for the Delhi Capitals. Chasing SRH’s target, the team never found itself in the chase, losing wickets at regular intervals in what ended as an utterly embarrassing pursuit of the score at hand.

Its not a performance which many can say wasn’t coming though. This Delhi Capitals batting order is known to crumble under the slightest bit of pressure and as the surface turned and gripped for the spinners, the side’s batting order’s willingness to throw its wicket away saw the side stutter to a shambolic defeat.

Now back on a completely different surface, Delhi Capitals will be playing in just the ideal conditions which suit their batsmen. The gamut of their explosive and young batting unit will be fully felt today as the side comes out hammer and tongs on a surface cut out from the finest cloth for the batsmen.

For KKR, this clash is all about emulating their bowling effort against the Royals. A spiting image of that effort will hand them a win on a track which will completely play out in favour of the batsmen.

On a surface where either side will pile on the runs, it’s the better bowling unit which wins this one. And the versatility Delhi have on offer in that docket should see them eek out a victory for themselves.

There are perhaps fewer wickets in the world more conducive to the batsmen than this surface. The two clashes contested here have been peeled apart for gargantuan scores and we will be in for much of the same today with the side winning the toss opting to chase.

A typical hot day will welcome the players out in the middle.

Rishabh Pant might have managed to have scored 96 runs till now but they have hardly been convincing. Despite being way more subdued, he’s failed to correct his ever willingness to throw his wicket away.

In the midst of this quagmire, today’s surface is just the one he would want to play on. With the ball coming on so nicely onto the bat, he’ll be allowed to throw his bat at almost everything and pile on the runs.

Despite getting starts, Shikhar Dhawan has completely failed to convert those into meaningful scores. He does look good for a behemoth score though after raking up 34 the last time around to see us opt for the Delhi opener.

Captain Shreyas Iyer will assist him given the 82 runs he’s helped himself to uptill now. Completing the trio of picks from the capital based setup is Prithvi Shaw after his 64 run match winning effort against CSK.

KKR on the other hand see us opt for the services of Shubman Gill. He looks to have finally hit his stride, settling into his groove to register 47 in the bygone tie.

England’s Eoin Morgan has hit the ground running as well, showing why he’s considered such a lethal name in white ball cricket with two solid scores on the bounce.

Delhi Capitals elsewhere see us immerse in the services of Marcus Stoinis who can explode for a cameo in the death overs.

Kagiso Rabada is pushing hard for that Purple Cap. The Delhi speedster has already accrued 7 wickets in three encounters, pitching the ball in all the right areas to make facing him an extremely daunting affair.

The opposition on the other hand see us being with their spearhead, Pat Cummins. Yet to justify his worth, he’s slowly starting to grow into the season with his pace paired with his movement on the ball offering glimpses of the staggering amount crooned his way.

Shivam Mavi is making real inroads this season. The young pacer peeled off two scalps the last time around, wickets which showed why he’s been earmarked as such an exciting prospect.

DC Bat First: Shreyas can easily strike the ball at a quick rate with a free hand to see him be our captain while Gill is the vice-captain.

KKR Bat First: Gill is connecting the ball exactly as he likes at the moment to see him be our captain while Shreyas is the vice-captain. 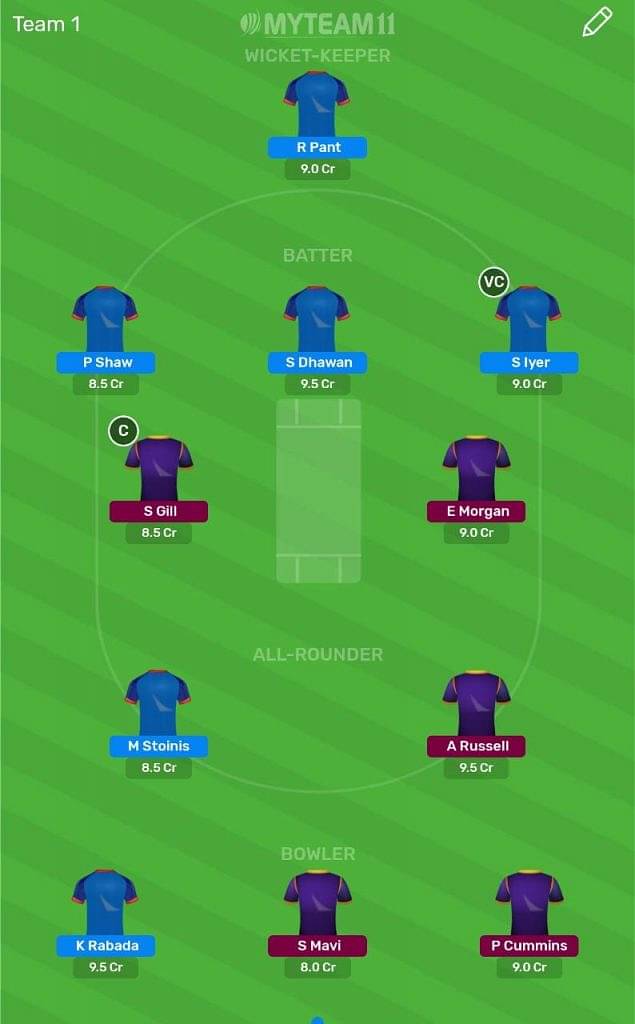