DC Vs RR MyTeam11 Team Picks, Pitch Report, Probable Playing 11 And Match Overview: Delhi and Rajasthan take on each other for the second time in the space of a week.

Having only clashed heads last week, Delhi Capitals and Rajasthan Royals are all set to spar it out again today. The two sides from the north will once again be vying for a claim on the blet with Delhi currently holding the moniker of the champions of the north after defeating Rajasthan previously this season.

That defeat continued a calamitous run of fixtures for Rajasthan, one the club was extremely fortuitous to snap against Sunrisers Hyderabad. All but headed for yet another howler of a defeat as they lost early wickets,  Rajasthan’s last set of batsmen scripted one of the stories of the season on the day.

In what was an incredible late surge by the side, the team managed to keep itself alive in the marquee league with a last gasp effort. The run chase could end up being a defining moment for the side, a much needed show of fight and character the side will be looking to further build on when it takes on Delhi today.

Taking on Mumbai for a shot at top spot in the league, Delhi ended up failing to win the coveted prize. The side’s bowling unit made for a meek and timid unit, one Mumbai had little qualms in ripping into shreds and wiping the floor with.

However, on a surface more conducive to their brand of bowling, Delhi should manage to revert to winning ways today.

A conventional surface to come out and bat first on, the team winning the toss is all set to do the same today. The surface is quick to regress after the first period of play, a track which has offered nothing to the side chasing.

Nothing changes on the weather front with the usual gusts of profuse heat set to welcome the players.

This just isn’t turning out to be Jos Butler’s season. However, for a lack of better options in this ambit plus Butler’s ability to go on a rampage once settled into the middle, we’ll be sticking with the Rajasthan man for the encounter.

After a start where he blew hot and cold, Delhi’s captain, Shreyas Iyer is finally starting to hit that consistent patch of form. He came up with 42 runs for his side the last time around, combining with Shikhar Dhawan who piled on 69 runs on the day to post a challenging target for Mumbai Indians.

Opener Prithvi Shaw links up with the two whilst Rajasthan will see their captain Steve Smith be inducted in our setup. Asked to bat at three the last time around, he was unluck to see his knock be curtailed on due to a runout but we envision him working on that aspect come today.

Ben Stokes was completely wasted by Rajasthan the last time around. From being held back with the ball to being asked to open, the England player was utilised in a shambolic manner by the side.

We envisage them reverting Stokes to his more traditional role today, one where he can flourish. Joining up is Rahul Tewatia who is truning out to be a pious figure for the side, a player who won his side a second tie the last time around with a 45 run knock.

Delhi Capitals on the other hand see Axar Patel become the first player to be inducted in our side. He’s turning out to be amore than handy player for the side with his wicket to wicket line and length seeing him pull off wickets at regular intervals.

Marcus Stoinis wraps up the duo from the capital club owing to the form he’s hit this season with the bat.

The spearhead speedsters from either side will be gracing the land of our side for the encounter. We begin with Purple Cap holder Kagiso Rabada with the Delhi frontline fast bowler turning out to be a real match winner for his side this term.

Jofra Archer exploded for three wickets the last time these two met each other in the league to see him be a must have pick for us from Rajasthan.

DC Bat First: With Shreyas gradually finding his feet, he’ll be our captain for today while Rabada is the vice-captain.

RR Bat First: Rabada’s lethal line and length will see him snare wickets to see him captain our side while Archer is the vice-captain. 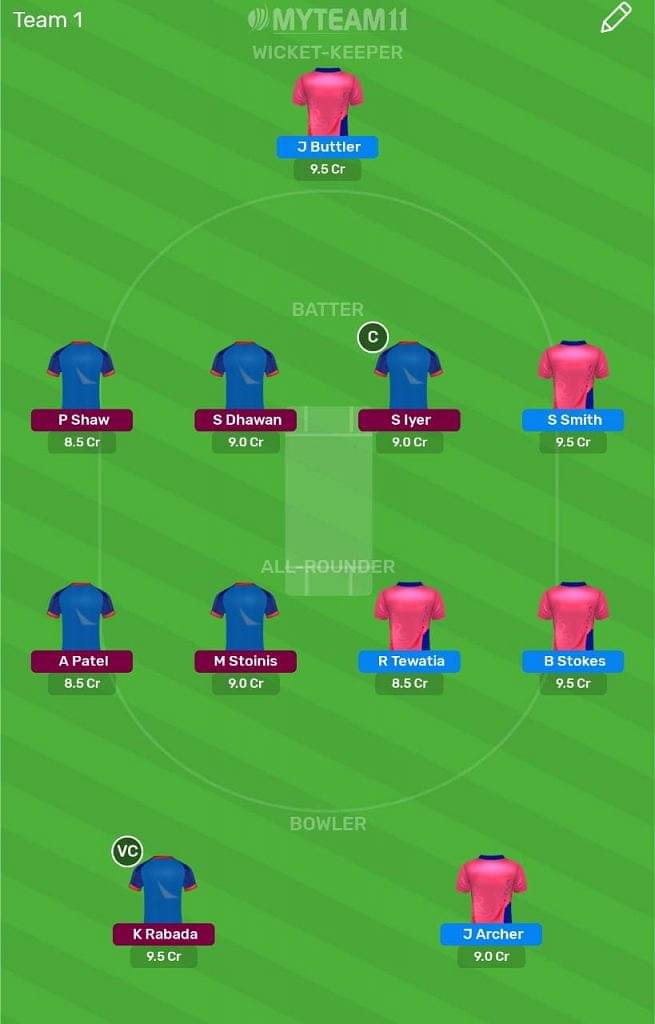 Wide ball in Test matches: The wide ball is one of the most common ways…