Bahrain Grand Prix 2020: Who is the fastest driver on speedtrap? No, it’s not someone from Mercedes

Home » F1 » Bahrain Grand Prix 2020: Who is the fastest driver on speedtrap? No, it’s not someone from Mercedes

Bahrain Grand Prix 2020: Who was the fastest driver on the speed trap on Saturday, and surprisingly it is not Mercedes who pushed the hardest.

A speed trap is usually used to measure the approximate highest speed of the track, usually placed somewhere around in one of the straights on the track.

Though Bahrain is not a proper power circuit, still it provided two decent straights, which allow cars to go their fullest. On Saturday, with the FP3 and qualifying the session gave an idea about the performances by the team.

The spread trap showed some incredible amount of pace on the straights. However, there are some surprising revelations in the final tally, but it could also mean that some teams didn’t use their full potential to save the engine for Sunday.

Bahrain Grand Prix 2020 speed trap: Who was the fastest?

The figures revealed by the speed trap shows Daniel Ricciardo at the top with him registering 328 Km/h pace., and was followed by his teammate Esteban Ocon, who managed to pick a speed of 326.7 Km/h.

Surprisingly, Williams’ George Russell clocked third with a pace of 326 Km/h, showing that the British team gave its fullest on the straights on Saturday.

It was surprising to see both Mercedes drivers so low in the pecking order,  as Lewis Hamilton and Valtteri Bottas recorded 319.9 and 320.9 on the speed trap.

Meanwhile, it was Ferrari’s Sebastian Vettel who was the second-lowest among all as his dash showed the maximum speed of 292 km/h, only above Romain Grosjean, who was at 291.1. 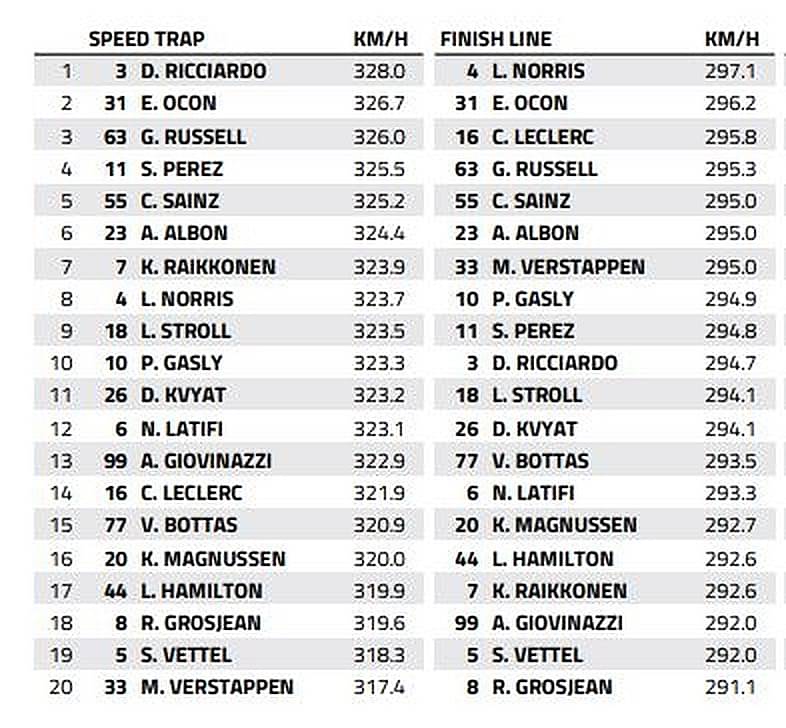 Final race going to be boring or interesting

The grid line-up reflects that one should not hope for a great race, as the usual three once again lead the rows. But with teams like Renault and Racing point looking solid in the last two days, it seems they could give a challenge in the race.

Moreover, the battle for the third position is also lucrative for the mid-table teams, so a certain amount of drama should be expected.

"Have added 2-3 more varieties to my bowling," says Yash Pathak ahead of Mauritius T10 Cricket League