F1 Driver Earnings: F1 drivers’ ranking on how much they cost per point

Home » F1 » F1 Driver Earnings: F1 drivers’ ranking on how much they cost per point

F1 Driver Earnings: F1 drivers’ ranking on how much they cost they obtained in comparison to the points they earned this season.

Formula 1 drivers earn a handsome sum because of their hefty contracts with their respective teams. However, at the end of the day, it is an investment by these entities, as the drivers are supposed to earn points to make their teams end up at the highest position in the table.

With this season almost over, Lewis Hamilton earned most of the points with a staggering difference against Max Verstappen and Valtteri Bottas, yet he cost around €150,000 to Mercedes this season (sixth highest) despite earning 307 points.

The reason being, Mercedes pay him whooping €47 million per year on his current contract, which will probably see an increment as he is set to sign an updated one.

Probably this is the ill-fate of being the highest earner in the paddock. The second-highest earner Sebastian Vettel is way above his contemporary Hamilton, as this season the German cost Ferrari around €1.06 million for a point.

Whereas his teammate Charles Leclerc has been highly economical to the team, costing only €92,000 to Ferrari per point. Comparatively, the younger lot of the paddock was cheaper to the paddocks.

Not because they have low-paying contracts to the veterans but they also performed better, Pierre Gasly cost Alpha Tauri only peanuts, as his impressive points tally of 63 fragmented his salary to around €15,000 per point, that is definitely a bargain.

Followed by McLaren’s Lando Norris, who only amounted €20.2k per point this season. On the other hand, no matter how rich Lawrence Stroll is, his son is certain is not a spoilt brat, costing his dad around €25.4k for every point.

With this, the big-budgeted teams giving higher salary packages follow the order naturally. 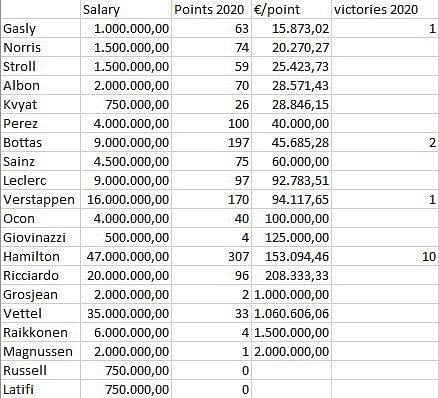 Bottom tier money in the drain

Despite the big spending by Red Bull, Ferrari and Mercedes, the three lowermost teams- Haas, Alfa Romeo and Williams saw the biggest loss, as Kevin Magnussen cost Haas €2 million for the single point he earned, whereas his teammate Romain Grosjean had a capita rate of €1 million.

Meanwhile, Alfa Romeo’s Kimi Raikkonen, the veteran F1 driver cost €1.5 million for every point he earned, though his teammate, who earns half a million a year costed less as his rate per point was only €125,000.

In the end, Williams, who bagged no points this season, there all investment went down in the drain, with both drivers aspiring to fetch at least minimal points in the last three races.