IPL 13 has been all about the South Africans for RCB. Chris Morris and AB de Villiers have combined to intertwine their expansive skill set with the two counterparts moving in unison to take over charge of the club’s destiny this season.

The two were at its again against Rajasthan but both delivering crucial displays to guide their side to a win which was drifting further away as the match ran its course. Where Morris did the job in the first part of the clash with four wickets in his kitty, AB de Villiers took over the mantle in the second part as he hit the ball all over the park.

That show of clean hitting saw him clean Rajasthan’s bowlers and snatch win from the jaws of defeat for the club. The 22 ball 55 run match winning performance was a smack in the face of RCB’s team management, one which had decide to demote him down to number 6 prior to that stellar knock.

This is a clash where RCB should have little qualms in registering yet another win. They are up against an opposition which is clearly lacking in quality, a side which will be caught wanting on a pitch where every run is worth gold.

A track which was already a slow and laggard surface has turned further stale as the league has traversed. Batting first is the way forward here with the spinners getting immense purchase from the track in the second part.

As is customary, the weather will make for an excruciatingly hot summer day.

AB de Villiers showed the last time around why he’s the king of the shortest format of the game. He not only went after the bowlers, needing little time to get his eye in the middle but tore them into shreds to propel his team to a win.

Virat Kohli has clearly decided he wants to play only one way this season. Rather than building towards the team’s cause, he’s been more interested in filling his shoes with runs, taking time out in the middle to slowly carve out laggard but relatively big scores.

Undoubtedly the young batsmen of the league at the halfway mark, Devdutt Padikal has made his name on the global stage with a string of flawless showings. We have Aaron Finch join up as well from the side, someone who is in dire need of runs but can easily scour them against a languid bowling setup.

Captain Eoin Morgan becomes our first pick from the opposition. His batting position continues to leave people flabbergasted but he managed to score 34 despite coming way too down for the club.

Shubman Gill is guilty of inconsistency but he’s gotten going for big scores when he’s clicked to see him be our pick from the side.

The only way RCB were going to shrug off their customary underperforming nature was if someone took over charge of their bowling docket. And luckily for the side, Chris Morris has done exactly that, a player who has solely transform the team’s contingent to give them a touch of ruthlessness.

Andre Russell has not justified the talk around him one bit this term. We are still going to opt for him though given his role with both the bat and ball.

On a track where the ball will hop, skip and turn and up against a batting unit way too guilty of losing quick wickets, Yuzvendra Chahal makes for too good a pick to do without. His variations and deviations are bound to see him accrue wickets to make him the first pick from RCB.

Isuru Udana will join up with him for the contest whilst the opposition see us yet reign in Lockie Ferguson after his sensational show of pure, raw quick bowling, one which saw him end up with three wickets inside his first match this season.

RCB Bat First: The interest Kohli is showing in spending time at the crease sees him be our captain while AB de Villiers is the vice-captain.

KKR Bat First: Kohli cherishes a chase to see him captain our side while Morris will be our vice-captain. 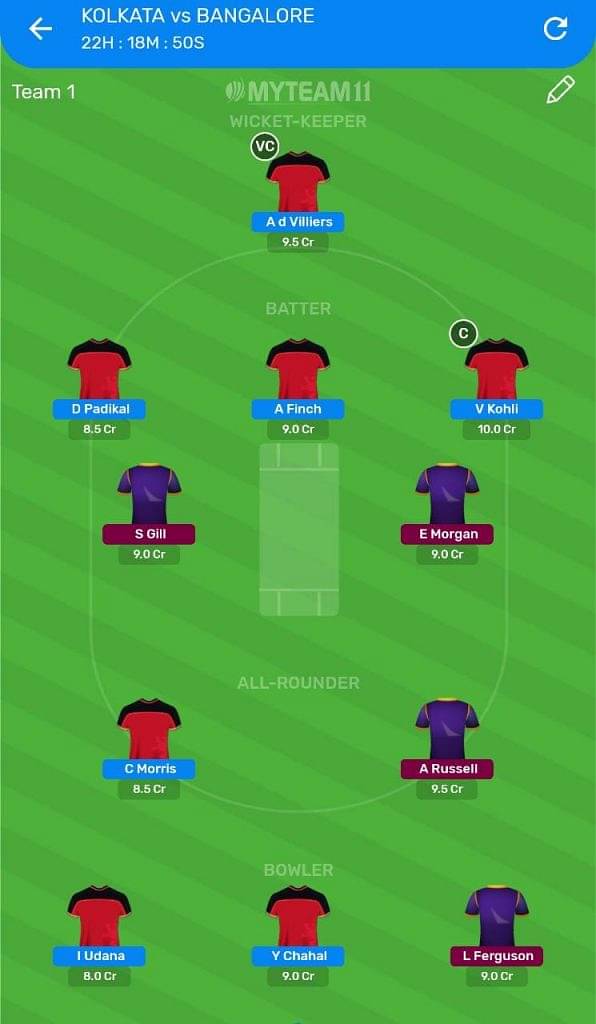