Sitting right in the trenches of the points tally, things needed to change and change fast for Chennai Super Kings. Running out of time, the underwhelming team scripted its most complete performance of the season against Kings XU Punjab, one which could end up being a defining moment for the side.

Faf du Plessis and Watson combined to hand over the side a comprehensive 10 wicket triumph on the day as the two stitched together a sensational match winning partnership for the side. It was one reminiscent of the bygone seasons, a top order stand which saw CSK stem a three match losing spree which was threatening to bring down the curtains on their season.

While its clear that the side still has massive work to do before it can be counted as one of the challengers in IPL 13, the side is set to be buoyed by their emphatic win. Its one which is not only set to bolster the mood around the setup but a showing which also served as a much needed shot in the arm for the side.

Given the nature of the pitch set to be used for today’s clash, it’s the better bowling unit which wins this one. It’s a track where the bowlers willing to take pace off the ball will triumph, a surface which will enable CSK to utilise their string of slower bowlers, ones who’ll guide the side to a win.

Being the second encounter to be contested in as many days here, we’ll be in for an even contest between the bat and ball. Given the purchase the bowlers garner from the surface in the second part, the team winning the toss is bound to step out and bat first today.

The playing conditions have eased up over the days with a dip in temperatures paired with profuse winds dousing the heat.

Dinesh Karthik has not only been lambasted for his dismal batting this season. His acumen as a captain has been raised fingers at as well with the wicket-keeper refusing to give up his slot to Eoin Morgan in the batting order.

Its that rigidness which sees us opt for him for the encounter. Given CSK’s bowling in the middle overs, Dinesh could finally manage to accrue some crucial and much yearned for runs to see him be inducted in our team.

Faf du Plessis is turning out to be a real heroic figure for his side this term. He’s not only steadied a sinking ship, holding fort at one end but has been responsible for his side’s two wins with the batsman top scoring for CSK.

Opener Shane Watson failed to get going in four successive ties but when he did finally come good, he exploded. He piled on 83 runs in his match winning partnership with Faf the last time around, runs which see him be our second pick from the side.

Ambati Rayudu will wrap up our three man docket from the club whilst the opposition see us make Shubman Gill the first pick for the showdown. After failing to make his name for a slew of seasons, he looks to have finally burst onto the stage with him consistently scoring flawless runs at the moment.

Despite being shunted down the batting order, Eoin Morgan is showing just how electric a bat he is. He was the only reason for his side staying in the contest against Delhi with him going on a rampage to score 44 quick runs.

Andre Russell took time to get going but he’s only going from strength to strength now. While he’s yet to really settle in with the bat, he’s doing more than a reasonable job with the ball with his two wickets against DC seeing him find a place in our setup.

The opposition on the other hand see us venture in with Sam Curran. He’s not been the amongst the wickets off late but his bowling has hardly lost the spice with his searing speed and ability to pitch it in the right areas making him a daunting name.

There has been nothing about Pat Cummins to justify his worth as the most expensive IPL bowler. We will still be opting for him solely based on CSK’s teetering batting unit, one which might find it tricky to square off against his lethal speed.

With two wickets, Shardul Thakur showed that he can be the much yearned for efficient bowler his side is yearning for. His counterpart Deepak Chahar has not only snagged wickets but has been economical as well, putting the brakes on the scoring with his deviation and variation making him a dicey name to face off against.

CSK Bat First: No qualms in making Faf our side’s captain after his 87 runs while Gill is the vice-captain.

KKR Bat First: Faf has to stay our captain irrespective of the toss whilst Gill while thrive on the free hand he gets. 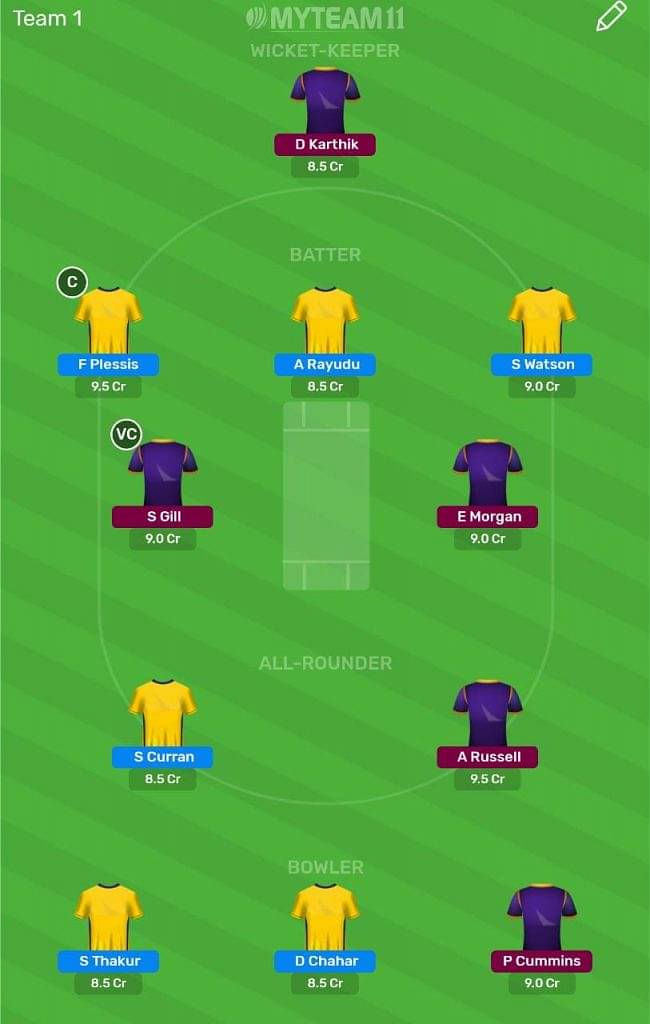