KOL Vs DC MyTeam11 Team Picks, Pitch Report, Probable Playing 11 And Match Overview: Delhi Capitals look to assert themselves of a spot in the playoffs at the earliest plausibl.

Just the one win away from cantering their way into this season’s playoffs, Delhi Capitals will be eager to get the job done with at the earliest. The club from the capital has been a real force to reckon with this term, a side which has torched its way into the pinnacles of the points tally.

After making the top 4 in IPL 12, Delhi Capitals for the first time in a long time will find themselves in the coveted spots once again. The consistency and dependability the side has showcased over the course of the last couple of editions has offered solace to the club with the team finally managing to break free of the shackles which held it back for so long.

Also, with a defeat in the Northern derby the last time they squared off against Punjab, Delhi will be hungry to turnaround that result come today. And it has exactly the opposition to pull that off against as well with their opponents making for an uninspiring and listless unit.

As straightforward as they come, this clash is a foregone conclusion. Delhi Capitals will not only win this contest but end up wiping the floor with their opponents with the weekend’s first encounter set to swing in the capital outfit’s favour.

A wicket riddled with aberrations has only further dwindled as the league has traversed its way through the fixtures. Today’s contest will be no different with the sun baking the surface in the afternoon further ascertaining the winning side to come out and bat first.

Afternoon conditions mean only heightened temperatures with the players set to be greeted with gusts of hot winds on the day.

Finally back after an injury for Delhi, Rishabh Pant will become the first player to find a place in our setup for the contest. The side’s wicket-keeper hasn’t been flamboyant but he’s managed to come up with a steady source of runs for the side.

From needing 13 seasons to register his first century in the league to now being the only player to record two 100s on the spin in the IPL, Shikhar Dhawan is in the form of his life at the moment. The opener was the only reason Delhi were able to post a challenging score against Punjab, an innings which saw him win the man of the match award.

Captain Shreyas Iyer slots in next to him while the opposition will see their captain make a foray as well. Eoin Morgan is yet to come alive this season but he’s coming into his own off late with his 30 runs under tricky conditions the last around being emotive of his stature.

Opener Shubman Gill is back to dwindling in form but its his ability to crunch the ball to the fence once he’s set in the middle which sees us rope him in.

Delhi’s bowling unit doing an impeccable job at the moment has seen Marcus Stoinis be held back with the ball. Despite that, he is more than a viable option for us owing to his ability to come out and cream the ball to the fence in the tailend of the innings.

Axar Patel is doing a tremendous job for Delhi at the moment. Not only has he come up with wickets at regular intervals but has more importantly completely dried up the runs with his wicket to wicket line and length.

The purple cap holder, this can easily end up into a tie where Kagiso Rabada extends his reign on the prize. He’s up against a torrid batting setup, one which will turn white as a sheet infront of him today.

Anrich Nortje is set to return for the contest and given the kind of inroads he’s made with the ball with his ominous deviations, he makes for a must have pick as well. The opposition meanwhile see us indulge in the services of Lockie Ferguson with him needing all off two matches to stamp his authority on the league.

Pat Cummins partners up with him to bring down the curtains on our setup for the fixture.

DC Bat First: Two 100 run knocks on the bounce for Dhawan see him captain our unit while Iyer is our vice-captain.

KKR Bat First: The same picks as aforementioned with un envisaging these two piling on the runs today. 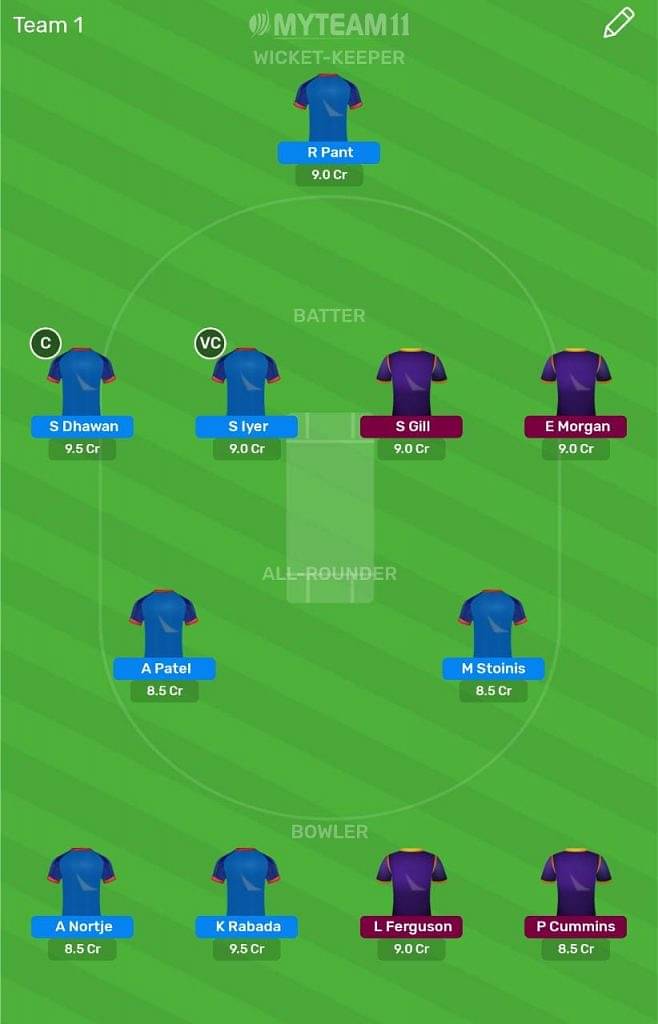