If there’s any club clutching onto the finest of straws and scampering their way through to win by the barest of margins this season, its Punjab. The club has scripted some of the most improbable results in IPL 13 across the course of the last week, doling out performances which have managed to keep the club alive in the race for the top 4 slots.

Looking dusted against SRH, Punjab came up with the finest bowling performance of the season. A controlled performance by their spinners never allowed SRH to run away with the chase with Jordan and Arshdeep combining in the last four overs to snare 6 wickets and pull off a win for Punjab right from the jaws of defeat.

The incredible and gargantuan show of fight and character from the club saw the club record its fourth win on the spin. The bygone winning spree has seen Punjab overhaul a season which was fast headed for doom with the club now very much in with a fair shout of making it into the ensuing round.

With clubs below them registering wins at the weekend, Punjab know they can’t afford to slip up at any moment. And with momentum in their ranks, we envision them coming hot out of the blocks today as well to extend their winning spin to five contests.

The last contest played over here offered glimpses of the batting friendly track on offer in the early part of the league. And we should be in for akin conditions today as well with the ball coming on nicely onto the bat in the first part before the wicket takes a turn to work in favour of the spinners.

Nothing changes on the weather front with a customary hot day awaiting us.

He’s regressed in form across the course of the last two affairs but KL Rahul continues to be his side and the league’s leading scorer to see him retain his place in our side. Joining up is Nicholas Pooran who has fortified the side’s middle order with his clean hitting brand of play seeing him up with a crucial 32 runs the last time around.

Mayank Aggarwal missed out for Kings XI Punjab the last time around owing to injury but he should go ahead for this one to see the opener from his side link up with the aforementioned picks. Completing the quartet from the side is Chris Gayle who went berserk the last time he played on this surface as he exploded for a half-century.

The opposition meanwhile will see us reign in an entire trio of picks. We begin with Nitish Rana who won the clash for his side the last time around with a string of listless performances by him being curtailed with an 81 run match winning knock.

Eoin Morgan has been abject with the bat this term but he continues to remain an integral part of his side’s batting order to see him link up. Completing the set of picks if Shubman Gill with the opener set to slash at the ball inside the opening stages of the powerplay period.

With a staggering 64 runs to his name the last time around, Sunil Narine is set to retain his place in his side’s middle-order on a wicket where quick runs will be extremely easy to come by.

Pat Cummins has completely failed to justify his behemoth amount this term but he sent down a peach of a spell the last time around to snare two wickets to see us repose faith in him for this one as well.

Lockie Ferguson has been terrific since his introduction to see him complete the one-two of picks from the side. Punjab on the other hand see us indulge in the services of Mohamed Shami with his wicket to wicket line and length seeing him send down the second most yorkers this season.

KXIP Bat First: This is a track where Gayle can go on a rampage to see him captain our side while Rahul is the vice-captain.

KKR Bat First: The same picks as aforementioned with the track set to play in the hands of these two batsmen. 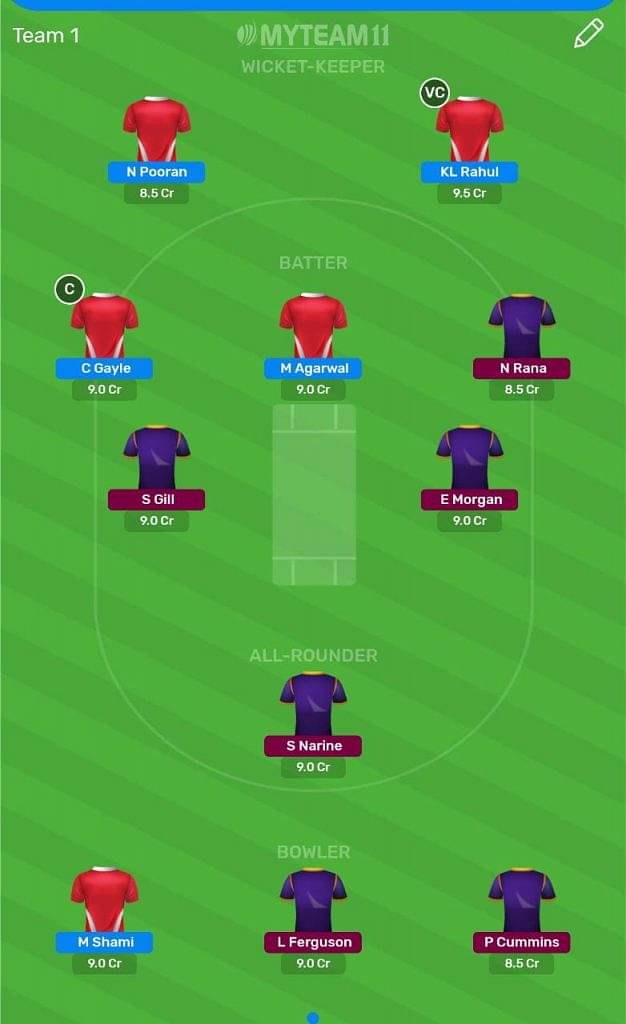 'Comments go be crazy': Clippers' Patrick Beverley is apparently in Cancun and wants reactions from Damian Lillard and co.