Although Rajasthan managed to pull off a heroic effort to register a much needed win against Kings XI Punjab, it looks to be too little too late. The side’s massively downbeat run rate leaves the side in a spot with the club set to exit IPL 13 irrespective of which way today’s encounter swings.

However, Rajasthan will refuse to give up before the league stage encounters curtail to see the side approach this clash with every last bit of sweat they have. Boosted by a crucial win the last time around, the team will be looking to register a gargantuan win come today as they look to make one last push to breach the top 4.

While its an extremely gargantuan mountain to climb, the club does have the form, momentum and capability to do it. For the first time this season, the side looks to have gotten its combination right but all the pieces of the puzzle falling in place to give the team the identity of the ruthless juggernaut its capable of becoming.

Rajasthan were impeccable the last time around and with depth in their batting order, we envisage them pulling off a win come today.

Given the massive amount of witness the pitch has witnessed across the last week, the team winning the toss is bound to come out and chase today with the surface improving for the batsmen in the second part.

While the weather conditions have remained largely the same when it comes to the soaring temperatures, the wetness on the track has immensely increased in the second part.

Jos Buttler has been handed over a new job by Rajasthan. He’s now been shifted lower down the order, a position where he’s handed over freedom to open his arms right from ball one.

After a lacklustre month in the league, Sanju Samson has finally managed to rediscover his waning form. He’s back looking the player who was being spoken about so highly previously to see him join up with Jos.

Steven Smith has massively benefited ever since being asked to bat lower down the batting order. He pulled off 31 runs for his side against Punjab, a knock where he showed composure to score runs at a quick rate to take his side past the fishing line.

A rejuggled batting slot for Robin Uthappa has seen him scrounge his way crucial runs inside the powerplay period to see him form the duo from Rajasthan. The opposition meanwhile see us opt for Shubman Gill with him coming up with a 26 run contribution in his previous encounter.

Nitish Rana went on a rampage the last time he took to the middle. The batsman exploded for a gargantuan 87 run knock, an innings he’ll be looking to emulate as his team grovels for survival.

Completing the three man docket from the club is captain Eoin Morgan.

Ben Stokes is now looking every bit the player Rajasthan decided to break the bank for. He was the fulcrum of his side’s win the last time around as he walked away with the man of the match award for his 50 run and 2 wicket contribution.

For Jofra Archer, this might be the last chance for him to make one final push for the purple cap. He’s consistently been amongst the wickets this season, returning with a two wicket haul the last time around as well to see him be an instant pick for us.

While Pat Cummins can’t redeem himself no matter what he does now, he has managed to show sparks of the bowler who became the most expensive speedster in the league. His two strikes in the bygone encounter see us opt for him along with counterpart Lockie Ferguson.

RR Bat First: With Stokes doing it all at the moment, he’ll captain our side while Archer is the vice-captain.

KKR Bat First: A lack of better and more reliable options see us opt for the same picks as aforementioned. 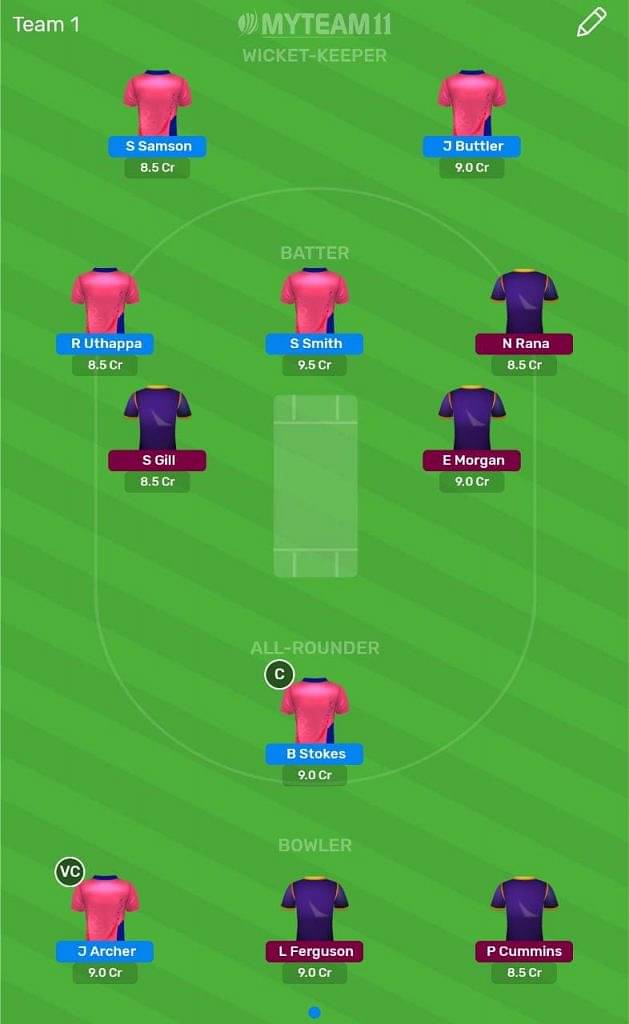 UFC Throwback: Watch Anderson Silva's Dramatic Showboating Against Chris Weidman Which Proved To Be Too Costly For The Legend