Description: KXIP Vs CSK MyTeam11 Team Picks, Pitch Report, Probable Playing 11 And Match Overview: Two sides with defeats in their bygone scrimmages turn to each other to stabilise their sinking ships.

For way too many seasons, Chennai Super Kings had decided to push their luck and surprisingly managed to get away with it as well. However, their complete lack of awareness in dealing with transfers has finally caught up with them with the side floundering in last spot at the moment.

With three defeats in their four fixtures in IPL 13, CSK have made for a dreary and languid setup. The side was defeated by SRH only a couple of days back, yet another harrowing and chastening defeat, one where the side allowed SRH to seize control of their affair despite being in complete control at one stage.

And given the short turnaround time for them with the team returning to the league today for Sunday’s second outing, CSK have a real task up their sleeves today. The side has a string of contentious issues to deal with, ones which cant be papered over given the measly two days the side has been given to address them.

Elsewhere, Punjab didn’t do any better the last time they took to the middle either. The side was completely dismantled by Mumbai, a horrid and chastening defeat which saw them being putdown by 48 runs on the day.

Given the predicament of both these units, today’s clash is a must win one for either side. We envisage Punjab pulling off a win solely due to their slightly better equipped bowling setup.

Long gone are the days when the team winning the toss decided to blindly chase over here. The only surface where the team chasing has failed to register a single win till date, this is a surface to come out and subject your opposition to a chase.

Excruciating heat awaits the players with the surface being drenched as the match runs down its course.

Playing on the first wicket that tested him, KL Rahul failed to continue in his clean hitting manners. Nonetheless, he has 239 runs in 4 encounters and looks good for more infront of a CSK bowling setup which has absolutely nothing to offer.

He needed time to get his house in order but once he got going, there’s been no stopping Nicholas Pooran. The 44 runs he pulled off the last time around saw him connect the ball in the middle, peeling it to the fence with ease to see him become a must have pick for us.

Mayank Aggarwal just can’t do anything wrong as things stand. Despite failing to convert his start to a staunch score the last time around, he still ended up registering a neat 25 runs to see him emerge as his side’s top scorer with 246 runs.

CSK on the other hand see us repose faith in a trivalent. We had to make the side’s leading scorer, Faf du Plessis the first pick of this framework with the South African finding it extremely easy to peel the ball to the fence at the moment.

Ambati Rayudu had 71 runs in his first outing to see him join up along with opener Shane Watson who is capable of hitting the ball in the sweet ball once he gets his eye settled at the crease.

Sam Curran might have been taken away for a bevy of runs the last time around but the pacer was extremely impressive in his opening spell. He got the ball to misbehave and with searing speed, he was rewarded with the one wicket as well for his troubles.

Given CSK’s traversity of a batting effort at the moment, it was only prudent of us to opt for a trivalent from Punjab. We begin with the selection of Mohammed Shami, the side’s leading wicket taker with his wicket the last time around taking his tally to 8 wickets in 4 clashes.

For Sheldon Cottrell, recovering after the battering he took in the first tie was never going to be easy. However, he did manage to pull off respectable figures the last time around including the one wicket to see him line up for us.

Mujeeb ur-Rahman has failed to see the light of his side till now but he looks all set to be roped in to replace James Neesham as Punjab look to bolster their bowling setup. Elsewhere, Deepak Chahar was extremely impressive against CSK, getting the ball to deviate either way to see him return with a couple of wickets.

KXIP Bat First: Mayank can end up piling on the runs with overs and freedom under his kitty to see him captain our side while Faf is the vice-captain.

CSK Bat First: Faf’s consistency at the moment and flawless strokeplay makes him our captain while Mayank is the vice-captain. 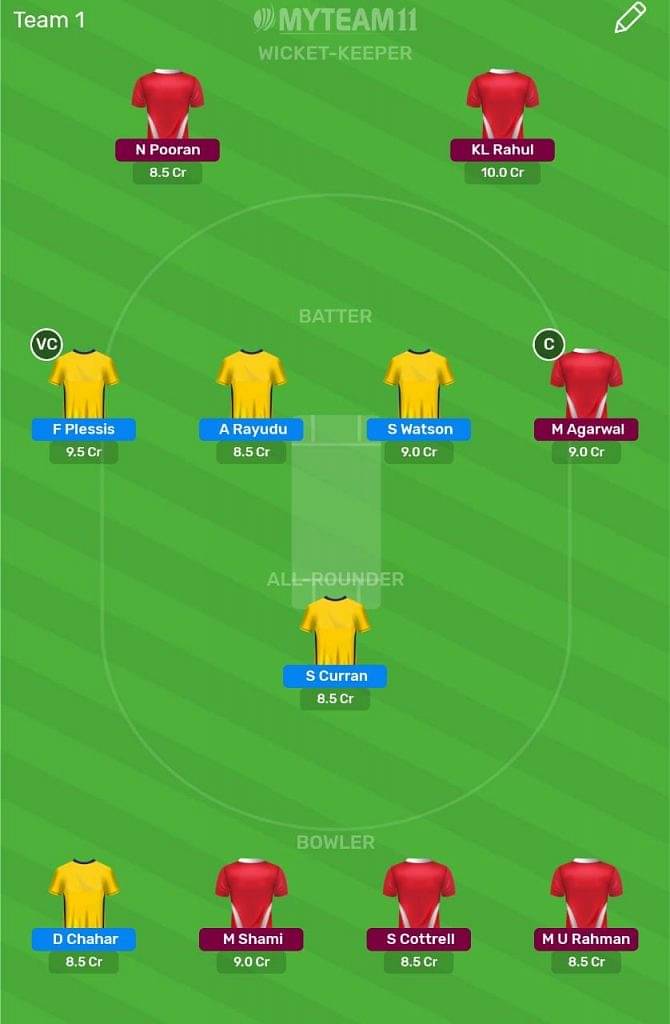