Ever since the onset of the Indian Premier League 13 years back, the showdown between Delhi and Punjab has been an eagerly anticipated and ardently awaited one. These two neighbours have gone at loggerheads in a bid to lay claim over the North part of area, a battle which has always immersed us in enthralling encounters.

And given the opposition of these two sides in the league in IPL 13, we are going to be engaged in an absolute ripper today. Where Delhi Capitals are storming their way into the playoffs with the side occupying top spot, Kings XI Punjab are struggling to keep themselves alive in the season with the club currently in bottom spot.

Looking like they had run their run, Punjab have someone managed to keep themselves alive in the league. The side has gone onto register two wins on the bounce including a sensational super over win against Mumbai Indians on Sunday.

That win not only flared Punjab’s chances of making it into the top 4 but also saw Delhi hang onto top spot. It’s a position they’ll be looking to move clear of with a win today, one the side should have little qualms in accumulating given their bowling setup.

This surface has more or less stayed the same across the course of the league. It’s a solid track to bat first on with the short boundaries being ones to exploit to pile on quickfire runs.

Nothing changes when it comes to the weather with a typically hot day paired with gusts of winds awaiting us.

Punjab’s captain and their top scorer, KL Rahul will be the first man to be snagged by us for the affair. He had a half-century the last time he stepped out, one which saw him further move clear in the race for the Orange Cap.

Joining up with him is Nicholas Pooran. The West Indian is a prized player for the side, someone who can not only play cameos in the tailend of innings but build knocks with his acumen when asked to as well.

Rishabh Pant looks to return for this one after having missed a week with injury and with Punjab being a dismal bowling setup, the Delhi wicket-keeper can easily go after their bowling.

Smashing his first 100 of the Indian Premier League, Shikhar Dhawan’s elusive knock couldn’t have come at a more ideal time. He pulled off a match winning century for Delhi against CSK, one which makes the opener an instant pick for the contest.

Captain Shreyas Iyer has been a steady source of points in the middle period to see him link up. Elsewhere, Punjab themselves will be represented by a duo, one made up of opener Mayank Aggarwal and Chris Gayle who has gone on a rampage in his first two encounters of the season.

Marcus Stoinis is being held back by Delhi with the ball but he’s continuing to do a crucial job for them with the bat as he scored a 14 ball 24 run cameo the last time around.

Kagiso Rabada has been electric for Delhi this season as well. The South African is pitching the ball in all the right areas, getting deviations on it to leave the batsmen in a quandary.

His counterpart Andrich Nortje has been equally impressive and influential for Delhi to see the two form a lethal and feared bowling unit. Elsewhere, his sublime show of yorkers in the super over against Mumbai coupled with two wickets in the match see Mohammed Shami be our pick from Punjab.

DC Bat First: Dhawan will love freedom in the first half of the tie to see him be our captain while Rahul is the vice-captain.

KXIP Bat First: The same set of picks as aforementioned with both these batsmen having nicely settled into their groove. 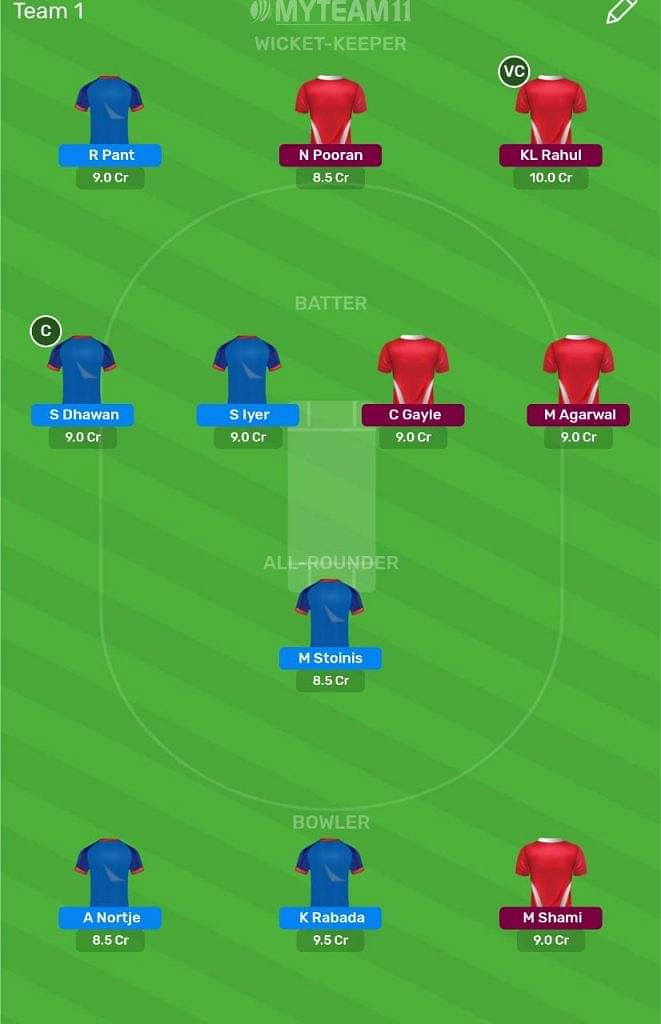