KXIP Vs RR MyTeam11 Team Picks, Pitch Report, Probable Playing 11 And Match Overview: Loser of today’s opponents gets shown the exit door from this edition of the marquee league.

Kings XI Punjab’s renaissance has become the talk of the town at the moment. From hammered in bottom spot with the measly one win at the halfway mark to now finding themselves inside the top 4, Punjab have shown every bit the fight and character needed to ascertain themselves of a top 4 slot in the league.

With five wins on the bounce, its safe to say that the club is well and truly rejuvenated at the moment. The manner in which the side has shown the stomach of a fight to claw its way out of the quagmire it found itself in has been lauded by everyone involved with the game with the team finally unlocking the true potential of its unit.

No longer the underachieving unit they were a couple of weeks back, Kings XI Punjab will be looking to ease a step closer towards affirming a playoffs spot in their favour today. Also, with a win for them seeing them end Rajasthan’s challenge this term, Punjab have the extra bit of incentive needed to come out hammer and tongs in this one.

Every contest for Rajasthan from this point onwards is a must win one. While it’s a colossal mountain for the club to traverse past, the foregone triumph against Mumbai Indians is just the impetus the club needed.

This has the makings of an enthralling affair, one we envision swinging in Punjab’s favour courtesy of their better spinning options.

The track has been a massively more pleasant surface for the batsmen across the course of the last week. Batting conducive conditions will lead the side winning the toss opt to bat first here and exploit the slowness of the track in the second part.

As has been the norm here, the players will be treated to a gust of hot wind their way as the temperature continues to stay on the higher side.

He’s now faltered in two ties on the spin but KL Rahul continues to remain the holder of the orange cap to see him retain his place in our setup. Joining up as ever is Nicholas Pooran, a player who has not only lashed at the ball to play pulsating knocks at the tailend of the innings but has been more than willing to be a part of the rebuilding process in the middle overs as well.

After a string of abject performances, Sanju Samson finally decided to apply himself in the middle for once. He showcased his full range of shots in his 54 run knock the last time around to see us rope him back in our team.

Jos Buttler links up with him, a player capable of slashing at the ball and playing a string of lusty blows for his side.

Mandeep Singh has ensured that his side haven’t felt the brunt of Mayank’s injury. He’s not only slotted in for the opener but ended up winning the match for his side the last time around as he remained unbeaten on 66 runs.

Partnering him up in that match winning partnership was Chris Gayle who helped himself to 51 runs while Rajasthan will see their captain, Steve Smith line up for us.

For the first time this season, Ben Stokes looked every bit the player Rajasthan had shelved out a staggering amount for. Not only did he rediscover his form with a 107 run man of the match display but more importantly pulled off those runs against a formidable Mumbai Indians bowling setup.

Jofra Archer is fast spiralling himself towards the purple cap prize. He’s been amongst the wickets in every tie, snagging two against Mumbai to see us rope him in from Rajasthan.

Mohammed Shami has been one of the most impressive Indian fast bowler in this edition of the IPL. His versatility, ability to hit the yorker length and work his fingers around the ball saw him accrue three wickets in his previous outing.

Ravi Bishnoi made full use of his variations to get the ball to deviate away from the batsmen and lure them into handing him two wickets in the same clash.

RR Bat First: The 107 run knock Stokes piled on the last time around sees him captain our side while Gayle is the vice-captain.

KXIP Bat First: Gayle has taken no time to hit the ground running to see us make him our team’s captain while KL Rahul is the vice-captain. 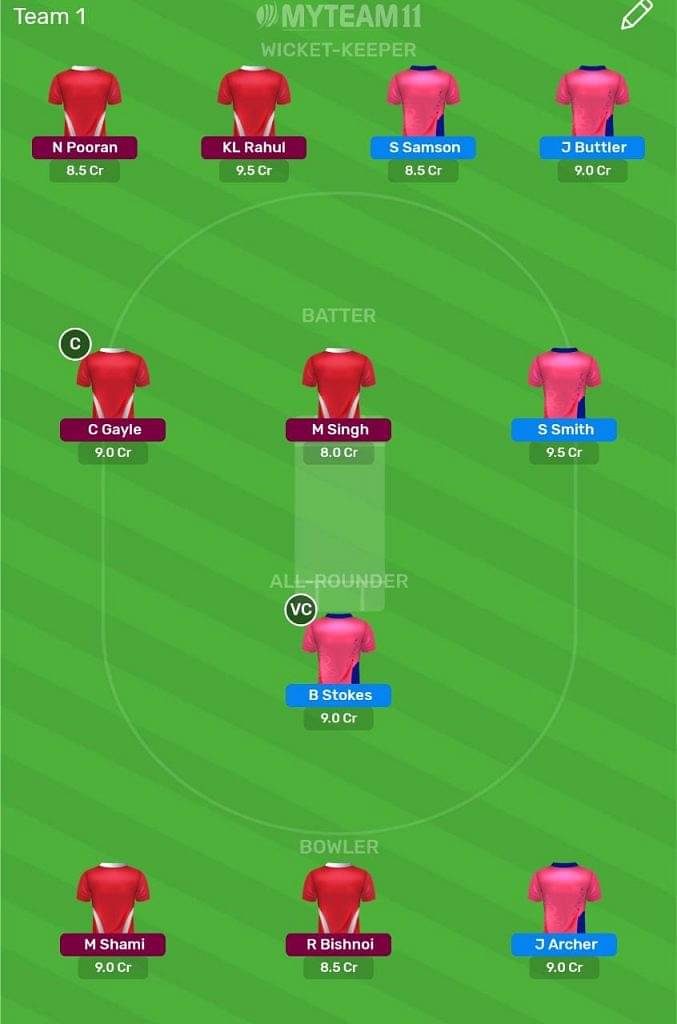