One of the most riveting and enthralling editions of the Indian Premier League, IPL 13 is exactly heat the cricketing fraternity needed this year. In the midst of a soup as Coronavirus brought to a skidding halt cricketing action across the global stage, the Indian Premier League has not only revived the game in 2020 but also given the marquee league’s faithful viewers an action packed two months.

Emerging unblemished out of the gruelling and vigorous playoffs and league stage encounters, Mumbai and Delhi will be gracing the land of the showpiece summit clash come today. Having met thrice previously this season with the most recent being only last week in the first qualifier, these are two units well acclimatised with each other’s brand of cricket.

Thumping Delhi in that contest to storm their way into the final, Mumbai lived upto their moniker of outright favourites for this season’s title. They have defeated on all occasions this season, a sparkling record they’ll be looking to keep intact come the all important showdown today.

Delhi did manage to recover just in time from that battering with the side comprehensively outshining SRH in the second qualifier. It was a clinical performance with both bat and ball, a showing which saw Delhi give a good account of themselves.

While they showed with that win that they are more than capable of launching a real fight for the title, Mumbai will just be too tough a team for Delhi to defeat today.

The last contest played over here saw the team batting first pile on in excess of 200 runs. With this being a final and given the long boundaries, the team winning the toss is set to come out and set a target.

Traditional heat will greet the players with the searing heat testing their fitness levels.

With 40 runs the last time he took on Delhi, Quinton de Kock once again showed why he’s been held in such high esteem by Mumbai. Partnering him up is Ishan Kishan who has made the most of the opportunities accorded to him this season with his half-century in that same contest taking his team past the symbolic milestone of 200 runs.

Their captain, Rohit Sharma will be accompanying the two. Its been an extremely dismal campaign for him with the bat but if there’s any player capable of overhauling that form and performing when his side needs him the most, its Rohit.

You might leave Suryakumar Yadav out of the Indian side with he’s someone who not give up. The Mumbai bat has yet again shown his resillinace and perseverance, crunching a sensational 51 run knock in the first qualifier.

Becoming the second player to amass in excess of 600 runs this season with his 78 run match winning knock against SRH, Delhi’s opener Shikhar Dhawan was a must have pick for us. Captain Shreyas Iyer joins him as we opt for a duo from Delhi as well in this docket.

Asked to open the last time around, Marcus Stoinis reposed the faith his side placed in him on the day. He made most of the early field restrictions to power Delhi to a hefty score inside the opening 6 overs.

His 38 runs were accompanied by two wickets, a wholesome display which sees him earn a place in our team.

Regaining control of the purple cap he had previously relinquished to Bumrah, Delhi’s Kagiso Rabada ripped SRH into shreds on Sunday with his four wicket haul. Andrich Nortje has seen the wickets dry up for him but his searing speed and deviations have made him a throbbing headache for batsmen.

Jasprit Bumrah will be extremely eager to thwart Rabada’s bid for the leading wicket taker this season. He wiped the floor with Delhi the last time these two met, a four wicket haul which was a testament to his expansive skill set.

For Trent Boult, today’s clash is all about redemption. Discarded by Delhi, he’ll be eager to once again prove to his old employers why letting go off his was such a calamitous mistake.

MI Bat First: Quinton’s fluent touch will see him lead our team out as the day’s captain while Suryakumar is the vice-captain.

DD Bat First: Given the exceptional touch these two are in, we’ll be opting for the same picks here as well. 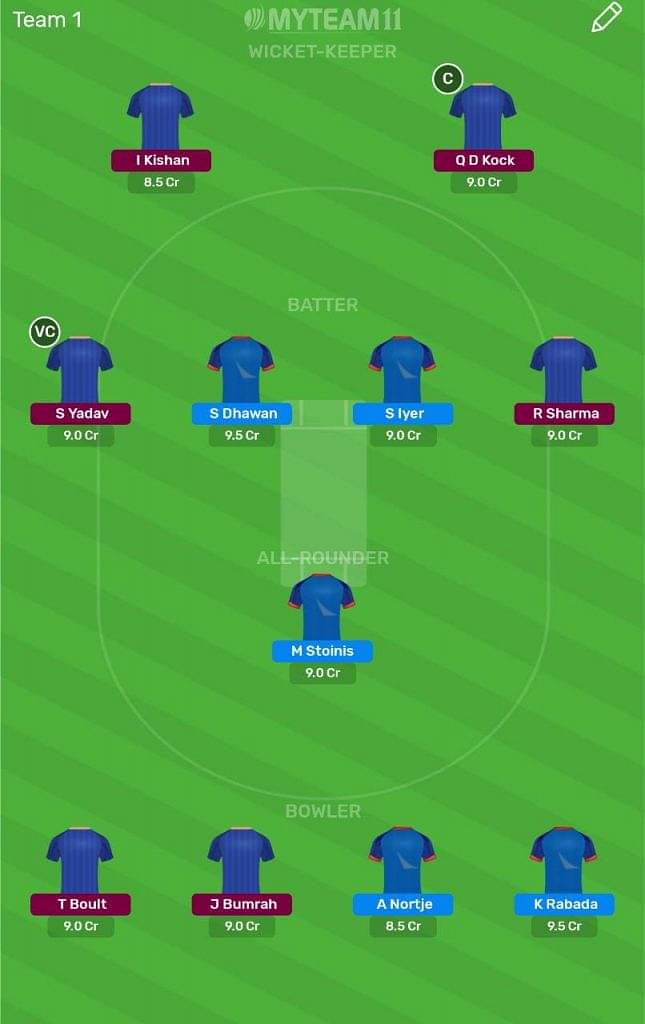 PewDiePie Donations : PewDiePie stops accepting donations on his stream! Follows up Pokimane & Disguised Toast - But why this trend?

'Is that CJ McCollum with another woman?': Blazers star responds to racy image with woman who isn't his wife