MI Vs DC MyTeam11 Team Picks, Pitch Report, Probable Playing 11 And Match Overview: Mumbai and Delhi go at loggerheads in a bid to become the first club to seal their berth in the marquee summit clash.

With an intriguing and enthralling period of over a month, one which encompassed the league stage encounters in the Indian Premier League behind us now, we are now in the business end of the exhibition tournament. Commencing today are the playoffs between the top 4 placed sides in the league, ones which are set to immerse us in riveting affairs.

If the league stage is anything to go by, these playoffs are going to make for edge of the seat thrillers. This edition of the IPL has been dished out the moniker of the most competitive season ever, a nomenclature the league earned owing to the thrillers we found ourselves in the midst of all across the course of the 56 bygone matches.

Where teams had to huff and puff in an arduous slate of fixtures to make it to this stage, one club who was way above everyone elsewhere was Mumbai. Sitting in first place with 18 points, they were in a pedigree of their own, a side which trounced almost everyone it came across to breeze its way into the playoffs.

Elsewhere, Delhi are making a foray into this encounter having just about managed to have eked their way through. The club needed to win its final league stage tie against RCB to assure itself of a spot in the first qualifier, a win which took the club to second place.

However, despite that high finish, Delhi have been abysmal across the last couple of weeks. And given Mumbai’s sensational form this season, Delhi will find it tough to navigate their way past the clash with Mumbai emerging as the winner.

Despite the long boundaries, the team winning the toss has preferred to chase off late. With wetness drenching the field in the second part, the bowlers have found it tough to grip the ball, making chasing a relatively preferred proposition.

There’s been a slight dip in temperatures off late with the gusts of wind prevalent easier vanishing up in smoke.

Quinton de Kock is not at his enigmatic best at the moment but despite a slight decline in form, he’s continued to come up with crucial runs for Mumbai. His brief stay in the middle against SRH was a power packed one, a knock where he cleaned the ball to the fence with ease.

Ishan Kishan managed to stick around at a time when wickets were collapsing like a house of cards for Mumbai to show the resilience and perseverance needed to become a worldclass batsman.

After a string of failures, Shikhar Dhawan rediscovered his form when it really mattered. He thumped home  half-century against RCB to see Delhi cruise their way to a crucial win to see the opener become the first pick from the club.

Captain Shreyas Iyer partners up with him while the table toppers on the other hand see us rope in their captain as well. Back from an injury, Rohit Sharma will be hungry to leave a telling impact on this encounter as he looks to remind everyone of his expansive skill set.

Suryakumar Yadav is storming his way to a string of runs at the moment, form which augurs extremely well for Mumbai.

Had it not been for Kieron Pollard’s bevy of sixes in the culminating stages against SRH, Mumbai would have been bundled out for an embarrassing score, an innings which earns him a place in our side.

The last time these two sides met in the league, the duo of Trent Boult and Jasprit Bumrah ended up running rings around Delhi. The two have been the most lethal quick bowling duo this season, two luscious names who are guiding Mumbai towards the glistening trophy.

Delhi on the other hand have their own duo to counter the two. In Kagiso Rabada and Andrich Nortje, the side has two guile filled players, names who have moved in unison to go for the jugular for the club.

MI Bat First: Suryakumar incredible form sees us make him our team’s captain while Dhawan is the vice-captain.

DC Bat First: Quinton will make the most of the batting conducive conditions to see him be our captain while Suryakumar is the vice-captain. 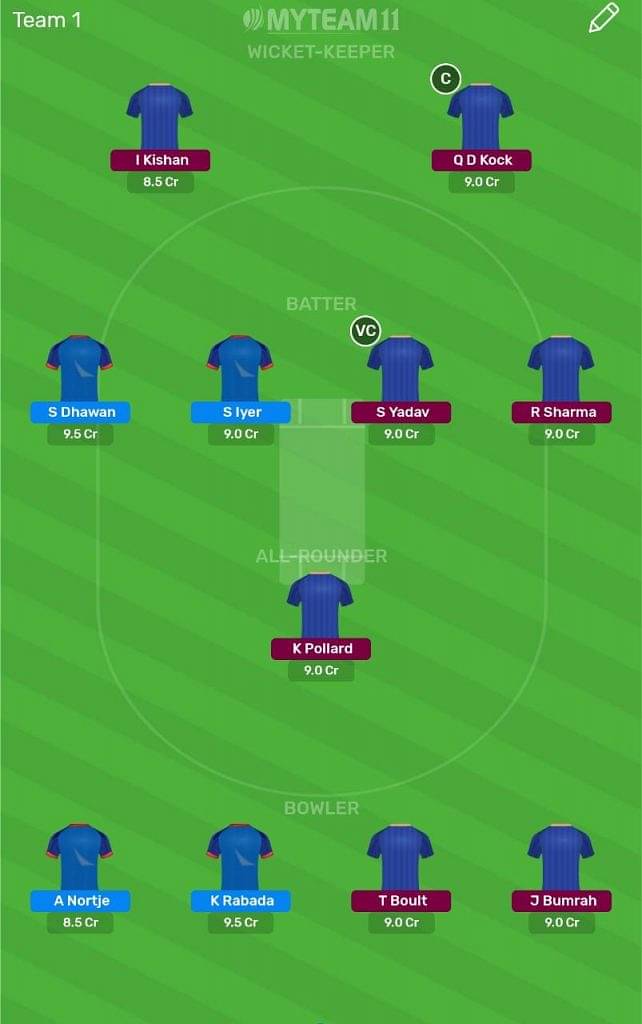