MI Vs DC MyTeam11 Team Picks, Pitch Report, Probable Playing 11 And Match Overview: Top of the league clash set to take us by aplomb with MI and DC set to set the stage alight.

Delhi Capitals are emerged as a real surprise package this season. Sitting in an unprecedented position at the moment, the team finds itself occupying top spot in the league with five wins from six encounters.

While this side is far from the finished product, a team yet to go through all the gears, Delhi Capitals have made for an entirely lethal and daunting juggernaut at the moment. This is a team, clicking in unison, one where the batsmen and bowlers are more than ready to step up one neither setup fails.

It was well documented in the side’s foregone contest against Rajasthan Royals. Despite an abysmal batting effort, the team managed to somehow script a win for itself on the league’s finest batting surface with the side’s bowlers moving in unison to pick up wickets at regular intervals.

In this rich vein of form, Delhi Capitals come across the most well rounded side in the league today. This Mumbai Indians team will be a true test of Delhi’s calibre and resources with Mumbai vying for top spot akin to Delhi.

On a surface where every run will count, Mumbai’s more stable and deep batting unit will dish out a win for the side.

The worst surface for the batsmen, the spinners and bowlers willing to take speed off the ball have loved their time out in the middle. Scoring has been a gruelling task with every run being tedious to come by, a track tailored for stepping out and batting first.

The evening means a slight dip in the temperatures with gusts of wind aiding in bringing down the heat.

After some appalling shows with the bat, Quinton de Kock has been quick to rediscover his touch. He’s well settled now with two imperious knocks in his kitty to see him become a must have pick for us.

Side by side, captain Rohit Sharma is slowly starting to pick up speed as well. He’s looked far from his best but when he’s exploded, he’s sent the ball right out of the park, something we saw on ample occasions in his 35 run knock the last time around.

After a sting of performances where he failed to make it count, Suryakumar Yadav reminded us what he’s capable of. The gamut of his strokeplay was visible in his 79 run knock, one which came at testing time.

Shreyas Iyer has been extremely jittery this season. He’s failed to contribute anything meaningful and make his initial starts count but his ability to go berserk sees us opt for him.

We have Prithvi Shaw slot in next to him owing to the kind of season he’s enduring, one where he’s come up with meaningful runs in almost every fixture.

This is just the kind of surface where Kieron Pollard’s slower deliveries and ability to take speed off the ball will be fully utilised by Mumbai. Along with his role with the ball, his clean hitting touch at the moment sees him nail his spot down in our side.

Marcus Stoinis just can’t stop winning matches for Delhi at the moment. He’s been quite the find for the capital side this term with his man of the match performance against Rajasthan entailing 39 runs and two wickets.

Alongside Stoinis, Delhi have had to massively thank South African, Kagiso Rabada for their consummate success. The Purple Cap holder is fully deserving of the moniker with him snagging three wickets against the Royals.

Anrich Nortje has formed a lethal partnership next to him to see him link up with Rabada. Elsewhere, Mumbai Indians have their own daunting set of speedsters with the Trent Boult–Jasprit Bumrah combine giving the best of batting teams cold feet.

DC Bat First: Bumrah can rake up the wickets on this surface as Delhi look to take him on to see him captain our side while Rabada is the vice-captain.

MI Bat First: Sharma will like to open his arms in the powerplay overs to see us captain him while Rabada is the vice-captain. 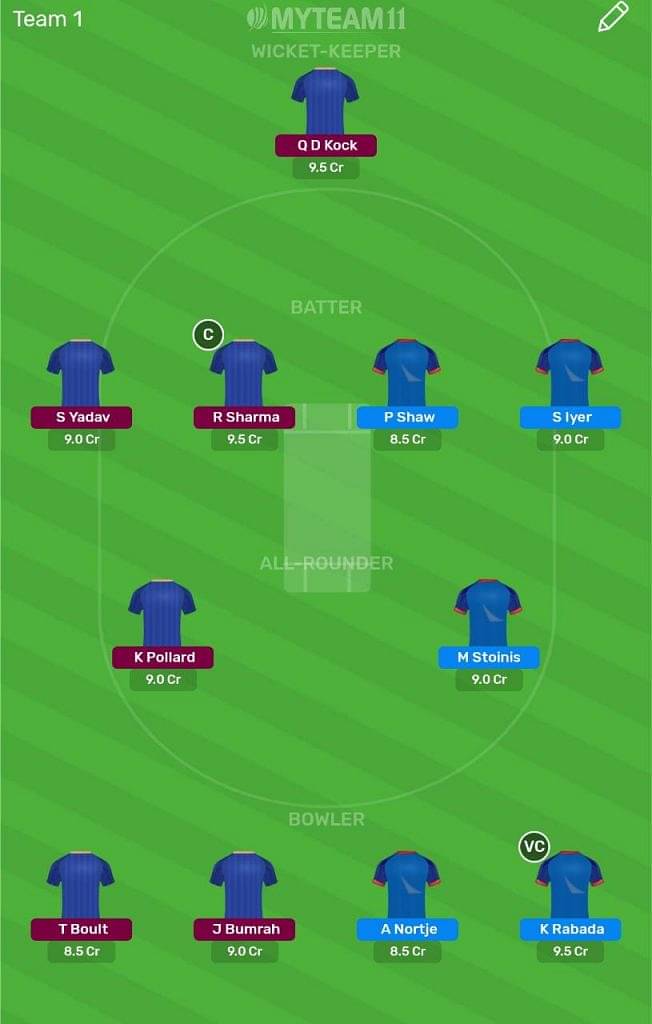 Is Ben Stokes playing IPL 2020 match vs SRH: Why is Abdul Samad not playing vs Rajasthan Royals?