With RCB horrendously faltering against Punjab, the race for top spot in IPL 13 at the moment fully boils down to the battle between Mumbai Indians and Delhi Capitals. And with Delhi defeating Rajasthan earlier in the week, today’s clash takes on the identity of a must win one for Mumbai if they are to recapture the relinquished spot in the pinnacles of the points tally.

It’s a spot the club is fully deserving of. Mumbai have time and time again this season shown why they were champions of the showpiece league last year, a side which unlike any other team has looked the complete package with every facet functioning at its 100%.

This side is a ruthless and lethal juggernaut, a team which is showcasing its panache to register 5 wins from 7 affairs. And a 6th win looks extremely likely for them come today with the team taking on a harrowing opponent, one they can easily end up handing out a chastening defeat to.

On a surface where the runs won’t be easy to come by, Mumbai hold a clear edge. The wind sways their way owing to their repertoire of batsmen, players capable of scoring on any surface in the world.

This has been the worst surface for the batsmen and as the league has run its course, the track has only worsened. Anything around 170 is more than enough while batting first with the team chasing hardly seeing anything work in its favour.

Gusts of winds will offer some solace to the players on an otherwise hot day.

It took Quinton de Kock some time to settle into his groove but once he’s rediscovered his groove, there’s been no stopping him. The Mumbai Indians opener has been scoring at a consistent rate, a player who is emerging as a steady source of runs at the moment.

After a couple of solid knocks, Ishan Kishan has reverted to his inconsistent. However, he’s someone more than capable of getting his eye in the middle and going berserk and this lacklustre bowling setup will offer him just the leeway to open his arms.

Rohit Sharma will be massively dejected with way this league has unfolded for him till now. He’s hardly looked good for runs but its his expansive skill set which sees repose faith in him for yet another encounter.

Where Rohit is dwindling, Suryakumar Yadav is going from strength to strength. He’s burst onto the stage, scoring consistently with him piling on a match winning 53 runs against Delhi Capitals.

Eoin Morgan has been massively let down by his side this season. A refusal to play him at his proper position and too much shuffling around with him has deterred his campaign but the English batsman is a sensational name, someone capable of getting his eye in the middle at any given stage.

Shubham Gill looked solid in his 34 run knock the last time around to see him complete the duo from his side.

A wicket where his brand of slower bowling will flourish paired with his ability to hack at the ball and play some lusty shots sees Andre Russell be our lone pick in this docket.

Mumbai Indians’ pace triad is going to run amuck today. Jasprit Bumrah, James Pattinson and Trent Boult will move in tandem, thronging the field to rip apart a stuttering batting unit into shreds as they each snag wickets at regular intervals.

Prasidh Krishna has utilised his ability to work his fingers on the ball and take speed off it to not only restrict the runs but snare four wickets in two clashes as well.

MI Bat First: Quinton’s resurgence sees him be our captain while Rohit is our vice-captain.

KKR Bat First: Quinton can easily get his eye in a chase to see him captain our team while Bumrah will ease in as the vice-captain. 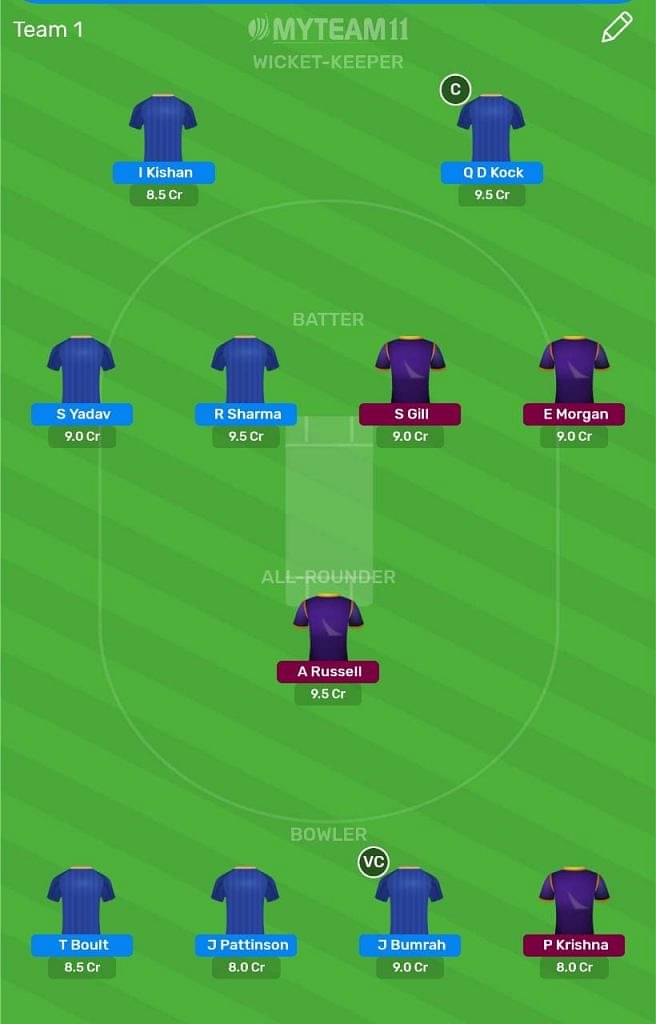 India vs New Zealand Southampton tickets: ICC are said to be preparing for ticket sales…