Kings XI Punjab might have managed to register their second win of the season the last time around but that result means little when it comes to the larger scenario. Far from their own brilliance on the field, the side was left thanking a clueless Kohli for torrid captaincy, decisions which allowed Gayle to go on a  rampage and claw a win out of the jaws of defeat.

It was fortuitous result, one which will do little to spur the side infront of this ruthless Mumbai Indians side. Where Punjab can’t but themselves a win in the league, Mumbai are refusing to be defeated by absolutely anyone, a side which has recorded six wins from eight matches.

Its not only the results bur rather the manner in which they have come about which have seen many tout Mumbai Indians for a fifth IPL title this season. The 8 wicket win the side registered the last time around was a testament to the wholesome, comprehensive and clinical brand of cricket the side has played till now, a team walking all over its opponent.

This meticulous Mumbai juggernaut will not only put Punjab to the sword but outshine in every department of the game today. There are just no shortcomings prevalent in Mumbai’s ranks, a side set to reclaim its previously relinquished top spot come today.

The match contested over here yesterday was the first time in days that the side chasing managed to register a win. However, that result was more down to AB de Villiers heroics than the nature of the surface with the side winning the toss set to come out and bat first today.

The opening period will result in slightly improved temperatures as wind offers temporary relief on an otherwise horridly hot day.

Not only Punjab’s but the league’s leading scorer as well, KL Rahul stayed unbeaten on 50 the last time around to see him be the first pick from the side. We have West Indian Nicholas Pooran join up as well given the form he’s in, one which saw him step out and smash the winning six for the side against RCB.

Quinton de Kock’s man of the match performance the last time around showed by Mumbai Indians hold him in such high esteem. He was electric for the side on the day, showcasing his credentials with a scrumptious knock to make him our first pick from the club.

A massive reason why he was able to express himself so freely was due to Rohit Sharma at the other end who ended up with a neat 36 runs of his own on the day. Suryakumar Yadav will love playing against this absurd bowling setup to see him join up with his captain.

Playing his first clash of the season, Chris Gayle showed why he’s considered such a tricky batsman to bowl to. He cleaned RCB straight out of the park, taking little time to settle into the middle and play some lusty blows to hit a match winning 50.

Joining up is Mayank Aggarwal who came up with another crucial contribution on the day to lay down the foundation for his side’s second win against RCB this term.

Kieron Pollard has not had much to do on the field at the moment but he continues to remain a handy asset for the Indians to see him be our singular pick for the contest.

Jasprit Bumrah and Trent Boult have combined to give this Mumbai Indians bowling unit the identity of a lethal and daunting unit. They might have ended up with just the one wicket between them the last time around but their wicket to wicket line and length saw them put the brakes on the scoring rate and crate wickets for their counterparts.

Mohamed Shami managed to snag two RCB wickets in his foregone appearance to see him be our final pick for the tie.

MI Bat First: Quinton’s match winning knock from the previous tie sees him be our captain while Rahul is our vice-captain.

KXIP Bat First: Rahul will make the most of a solid batting surface to see him be our captain while Quinton is the vice-captain. 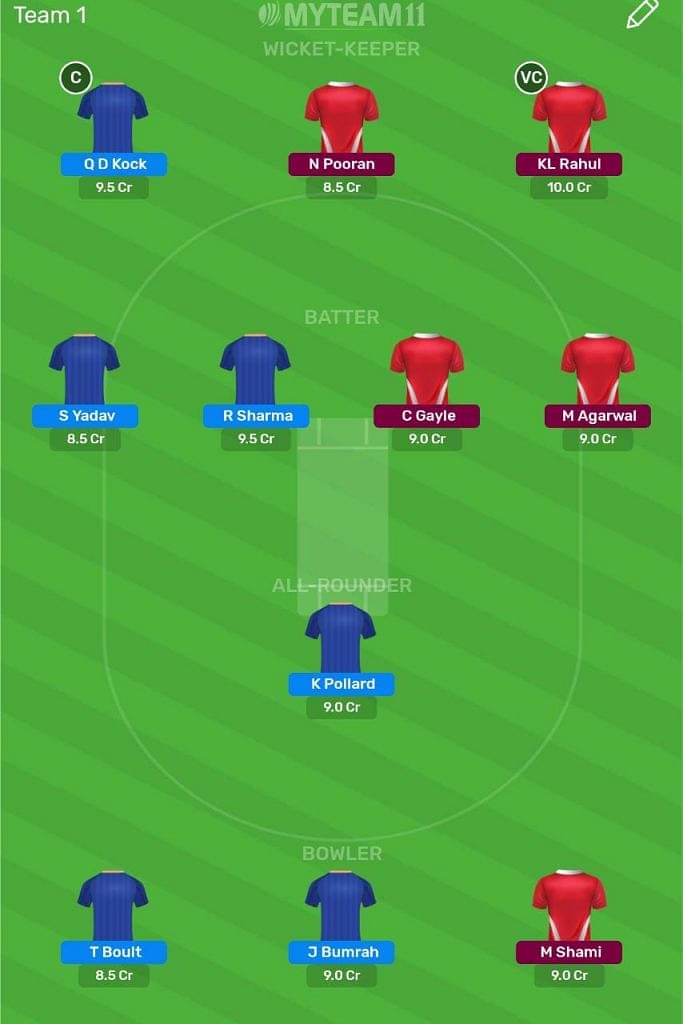