From being the only side to be defeated in IPL 13 to currently sitting without a win in their last two fixtures, Rajasthan Royals’ decline in the league has been only due to the club’s fault. Despite getting away with fortuitous wins in the opening exchanges, the team failed to capitalise on their luck and plug the real holes ever widening in their setup.

Team combination has been a source of massive peril for the club. The club’s gameplan to keep moving ahead with finished names and leave out promising young talent out of the limelight in the process in not only hurting the team’s chances this season but also refraining us from being immersed in the skill set of some exciting names.

The side was utterly outplayed by RCB in its foregone affair, a clash which they were schooled by 9 wickets. The team’s bowling unit has made for a dreary unit, a contingent which barring the services of Archer has offered absolutely nothing in four encounters.

Where the Royals are on the downtick, Mumbai Indians on the other hand have shunned off the initial issues bogging them down. The side has traversed rough waters, a team which is looking very much the side which won the title for a record fourth time the last season.

On this surface, its clearly Mumbai’s bowling unit which gives them a massive edge, one which will take the side to its fourth win in six clashes.

Additional days to help work on the surface should see us be in for better batting conditions. However, that won’t change the team winning the toss from stepping out to bat first on this wicket with the track quick to break open and aid the spinners as the match runs down its course.

The weather has been a slight relief for the players across the last couple of days with a dip in temperatures.

Sanju Samson’s form across the last couple of affairs has played a big role in the Royals’ demise. However, he’s someone who hardly falters for a lengthy period, a name who burst onto the stage this season with two gargantuan scores on the bounce.

Ever since his arrival, Jos Buttler has failed to get going. His two scores of 20 have been promising though and given his ability to explode, we will stick with him for the scrimmage.

After failing in three successive clashes, Quinton de Kock finally came alive against SRH. The MI bat went berserk, piling on 67 runs on the day to see him hold down his spot in our setup.

Pairing up with him is Ishan Kishan who had a steady 31 runs in the same fixture, an innings which joined a consistent set of knocks from his bat.

Rohit Sharma’s dejection was written all over his face as he chased a wide ball the last time around. He’ll be hurting after that dismissal, one which will further buoy him to come out hammer and tongs against a Rajasthan side which has offered little till now.

Steve Smith has been underwhelming in the last couple of encounters. He’s surprisingly played shots not associated with him, trying too much when his normal style of play would have sufficed.

He’s too good a batsman to keep committing the same errors time and time again to see him line up for us.

With every passing encounter, Kieron Pollard is only going from strength to strength for Mumbai. He piled off 25 runs in frugal balls the last time around, rifling his way to the fence by middling the ball in the sweet spot.

As things stand, the Boult-Bumrah partnership is easily the most imperious new ball partnership in the league. Both Jasprit Bumrah and Trent Boult returned with two wickets on a treacherous surface for the bowlers, ones which sealed the win for Mumbai Indians.

James Pattinson has completed the daunting trio perfectly with his two wickets in the same skirmish making him a must have pick as well. Elsewhere, speedster Jofra Archer has been steady source of points with both the bat and ball, a player who ability to score crucial cameos sees him wrap up our setup.

RR Bat First: Sharma will be lethal against this paper thin bowling unit to see him be our captain while Samson is the vice-captain.

MI Bat First: Rohit will love the freedom batting first accords to see him lead our side as the captain while Quinton is our vice-captain. 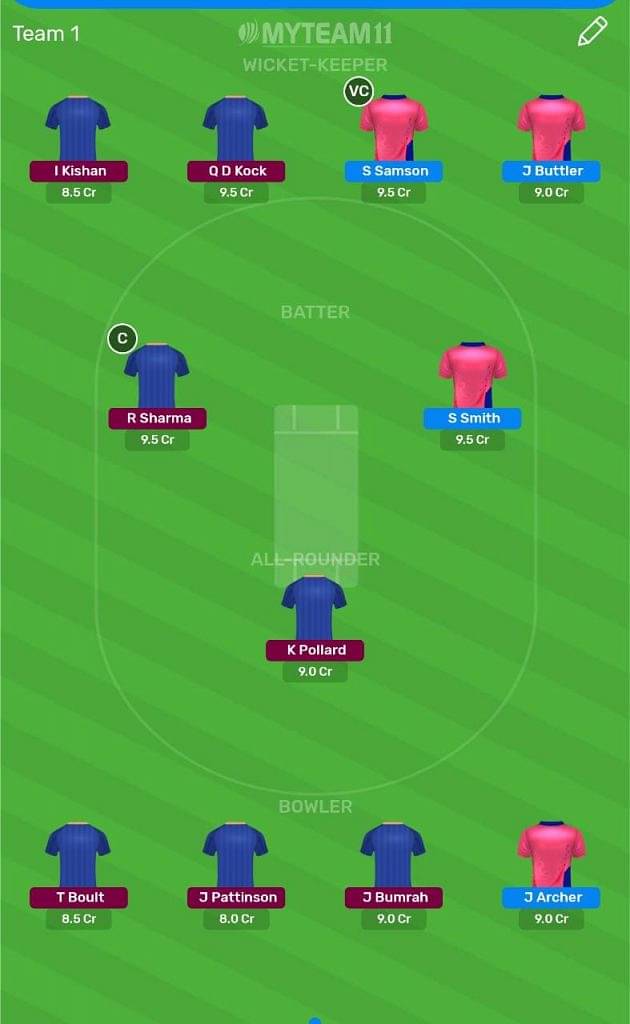 Bhuvneshwar Kumar replacement IPL 2020: Who is Prithvi Raj Yarra; Has he played in the IPL before?