Description: MI Vs SRH MyTeam11 Team Picks, Pitch Report, Probable Playing 11 And Match Overview: SRH return to the middle for their second contest in as many days as the side looks to keep its winning spin intact.

As wickets tumbled at regular intervals and Sunrisers Hyderabad saw their entire top order return to the pavilion against CSK, a defeat looked impending for the side. However, the club’s young players were more than willing to step up to the mantle and show why the side had unearthed them this season to lead the team to a win.

It was a triumph the side solely had to thank its bunch of young, enigmatic Indian names for. From Garg and Abhishek combining for a match winning partnership to add the much needed late impetuous to the side’s total to the bowlers upping the ante once Bhuvneshwar got injured, SRH’s win on the day was an extremely pleasing one to the eye.

Now back out in the middle for their second encounter in as many days, SRH will be relying these players can once again take the onus upon themselves. The side becomes the latest causality of the league’s arduous and tedious schedule with the club partaking in Sunday’s first fixture.

However, this encounter is going to be an extremely gruelling and testing affair for SRH. With their pivotal speedster set to potentially miss this one, the side’s paper thin bowling unit will lie bare and exposed against a rampant Mumbai batting contingent.

And on a wicket where the runs will come by freely, its Mumbai’s more well versed and complete bowling unit which will see them win the encounter.

The most sublime track out of all the three surfaces to bat on, this is a track cut out for the batsmen. With this being an afternoon contest, the team winning the toss will be looking to come out and chase today with the surface set to stay entirely same across the 40 overs.

An afternoon tie means increased heat but no instances of wetness spurting on the field.

Nothing has gone Quinton de Kock’s way till now in the league. However, this SRH bowling setup and a surface which is filled in runs with it is just the ideal setup for Quinton to return to his touch to see us repose faith in the opener.

Ishan Kishan joins up with him with the player following up his sensational 99 run knock with a steady 28 run innings against Punjab.

Jonny Bairstow has had a mixed bag for Sunrisers Hyderabad at the moment. While he’s impressed in two encounters, he’s faltered in two as well but with 119 runs in four clashes, he remains the side’s leading run getter to see him line up for us.

For SRH, David Warner’s failure to launch into a gargantuan innings is hurting his side. However, the opener’s calibre can’t be negated, a player who we envisage settling into his groove today to peel the ball to the fence. unlucky

Kane Williamson was extremely unlucky to be runout the last time around as he erred in judgement but his brief stay at the crease alluded towards the solid form he finds himself in at the moment. Manish Pandey looked imperious in his 29 run stay out in the middle against CSK to see him complete the triad from the side.

Mumbai Indians on the other hand see us venture in with the services of captain Rohit Sharma. The opener smashed his way to a sensational 70 runs against Punjab, a staggering effort which saw why he’s considered one of the most pristine white ball cricketers in the world.

Suryakumar Yadav will be itching to settle into his groove and with SRH having little to offer in the bowling front, we envisage the Mumbai bat showcasing his credentials on the field today.

Kevin Pollard is continuing right where he left off from in CPL. His power packed brand of batting has been crucial to Mumbai this season with him throttling the side towards a behemoth score with 47 runs the last time around.

Trent Boult is showing why over the years he’s established his name in the pinnacles of fast bowlers around the global stage. He’s taken no time to settle into his groove at Mumbai, already snagging 6 wickets inside the space of four clashes to make him a must have pick.

Rahul Chahar is also turning into a really pivotal player for Mumbai. The spinner’s variations paired with his ability to get purchase from the surface is seeing him get deviations on his deliveries to see him end up with two wickets against Punjab.

MI Bat First: With 70 runs in his kitty the last time around, Rohit will be our captain while Warner is the vice-captain.

SRH Bat First: Rohit will flourish in a chase on a wicket which has nothing for the bowlers to see him lead our side as the captain while Warner is the vice-captain. 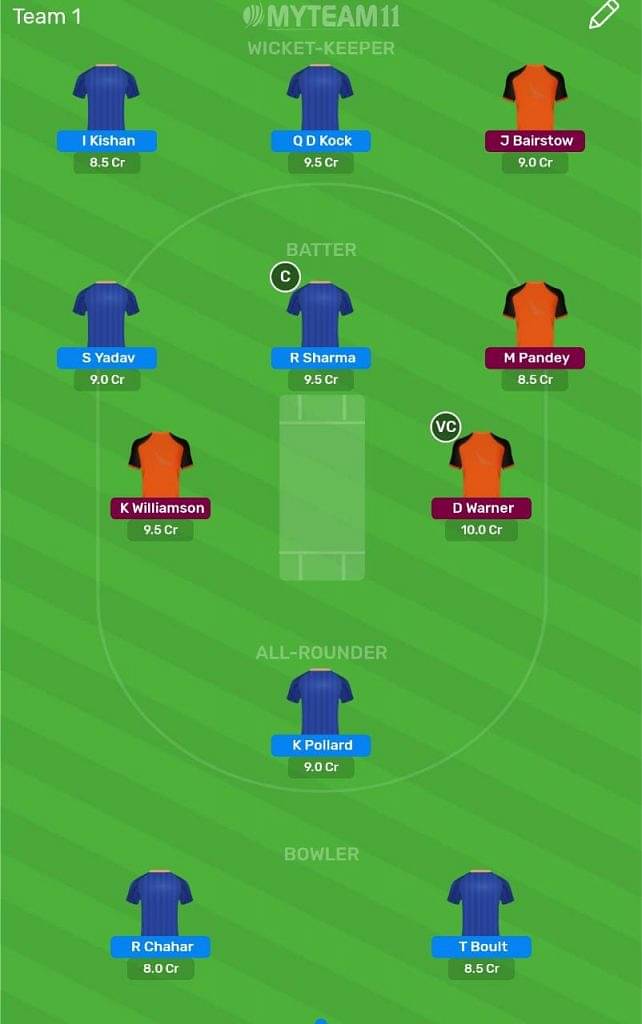 Sharjah Cricket Stadium Ground Dimension: What is the boundary size at Sharjah for IPL 2020?