“Luka Doncic and the Slovenian team celebrating with poker, vodka and hookah!?”: Controversial photos of the Slovenian Basketball team go viral after the players are spotted celebrating their maiden Olympics win over Argentina

Controversial photos of Luka Doncic and his Slovenian Basketball Team go viral where players are seen celebrating their win against Argentina with alcohol, poker and hookah. Rumours say players from various other countries were present too.

Earlier this past month, Luka Doncic and his Slovenian team made history by clinching their country’s first-ever appearance in Olympic Games. And Slovenia, especially Doncic, started off their 2021 Tokyo campaign with a huge win over FIBA World Cup Runner Ups – Argentina.

Surely, this historic win does deserve a celebration. However, the Slovenian team had a rather too wild a party.

A few controversial photos went viral, wherein players from the Slovenian team have been seen celebrating while playing poker, along with vodka and hookahs. 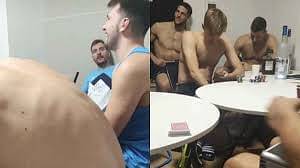 Luka Doncic and the Slovenian team was seen celebrating with poker, alcohol and hookahs

A few controversial photos were posted but immediately deleted by Cristina Ouvina, a member of the Spanish Women’s Basketball team, where one could clearly see the Slovenia team celebrate their maiden win inside the Olympic Village with Poker, drinking vodka and doing hookah.

Not only were several people gathered in a room, no one was seeming wearing masks nor any social distance was practised. Rumours also say, several athletes of different countries were present in that room, something the International Olympic Committee always was against.

As of now, there is no response from the IOC. However, at the rate the photos are going viral, in order to stop the promotion of such activities in the Olympic Village, the IOC will surely do everything in its control to curb such celebrations in the future and tackle the deadly coronavirus.

Ever since their debut-game win, the Balkan team have become the favourites to win a medal at the event. After defeating Argentina yesterday, Luka Doncic and co. will continue their campaign facing the host country Japan, led by Washington Wizards youngster Rui Hachimura.

Being a two-time national level Basketball player, NBA surely had my attention from a very young age. At age 19 now, I aspire to share the knowledge I gained over 10 years with fellow basketball-lovers through my articles!

“Snoop Dogg and Kevin Hart are hilarious”: LeBron James is seemingly enamored by the duo as they promote Tokyo 2020 and Snoop jokes about 'hotboxing'