Description: RCB Vs DC MyTeam11 Team Picks, Pitch Report, Probable Playing 11 And Match Overview: Either side looks to build on its bygone win as the battle for top spot heats up the league today

There might not have been a more befitting way to usher in a new week in the land of the Indian Premier League 13. With both RCB and DC nestled in the echelons of the league standings, this top of the table clash is set to see fireworks in the league explode this Monday.

Winning their foregone encounter by 18 runs the last time around, Delhi Capitals managed to make life tricky for themselves. Despite cruising to a win at one point, Delhi’s bowling unit floundered as Morgan went on a rampage before a sublime effort from Nortje managed to see the side snag wickets at crucial junctures.

Elsewhere, RCB have gotten off to an akin start with the side banishing its worrisome form of the bygone editions. For the first time in a long time, the side has began a season with three wins from four encounters, a side which is looking to finally overhaul its underachieving form this season.

Elsewhere, Punjab didn’t do any better the last time they took to the middle either. The side was completely dismantled by Mumbai, a horrid and chastening defeat which saw them being putdown by 48 runs on the day.

Given the predicament of both these units, today’s clash is a must win one for either side. We envisage Punjab pulling off a win solely due to their slightly better equipped bowling setup.

Yesterday was the finest this surface played out for the batsmen. While the first win while chasing was recorded on the day, the team winning the toss will not be lured by that with the surface being one to come out and make the most of the batting conducive conditions early on.

Slight dip in the temperature paired with gushing winds blowing in the evening will welcome the players out in the middle.

Despite batting on a wicket which played completely to his strengths, Rishabh Pant failed to make the full use of the conditions at hand. However, he did manage to accrue a neat 38 runs in his stay in the middle, a performance which sees us rope him in.

AB de Villiers didn’t step out to bat the last time around as Royal Challengers Bangalore cruised to a win but in the matches he has, he has looked the finest bat at the side this season.

Devdutt Padikkal is turning out to be way better than everyone envisaged. He’s not only lived upto the high expectations accorded on his head but has taken the league by a storm, scoring thee 50s in 4 clashes to see him become an instant selection for us.

Aaron Finch has not really gone berserk to score big but he’s been a steady source of quick runs inside the powerplay overs to see him be our second pick.

Virat Kohli needed four ties to settle into his groove but the run chase favoured him the last time around, one which saw him reign in a half-century for himself. Delhi Capitals on the other hand will see also indulge in the services of their captain after Shreyas Iyer hacked at the ball to break free of his shackles and pile on 88 runs the last time around.

We have Prithvi Shaw link up with him with the opener scoring his second half-century of the season after connecting the ball in the middle to crunch it to the fence for 66 runs.

Marcus Stoinis might be being pushed way too down the order by Delhi at the moment but he continues to be a solid pick given his role with the ball and ability to pick up wickets at regular intervals.

For the first time in the league, Kagiso Rabada was taken apart and torn into shreds. However, on conditions which will better aid the bowlers, he’s set to revert to his imperious best and show why he’s spearheading Delhi’s pace battery at the moment.

RCB see us make speedster Isuru Udana the first name from the side. In dire need of someone to come in and plug the holes which were sinking their ship, the fast bowler has offered much needed solace to the club, accruing four wickets in two outings to see him become a must have pick.

Spinner Yuzvendra Chahal continues to lead RCB’s wicket taking ranks with three the last time around, a performance which once again alluded towards his quirky brand of spin.

DC Bat First: Given Devdutt’s gamut of skill set, he ventures into our side as the captain for today while Shreyas is the vice-captain.

RCB Bat First: AB de Villiers will love the freedom and overs he gets to see him captain our side while Devdutt is the vice-captain. 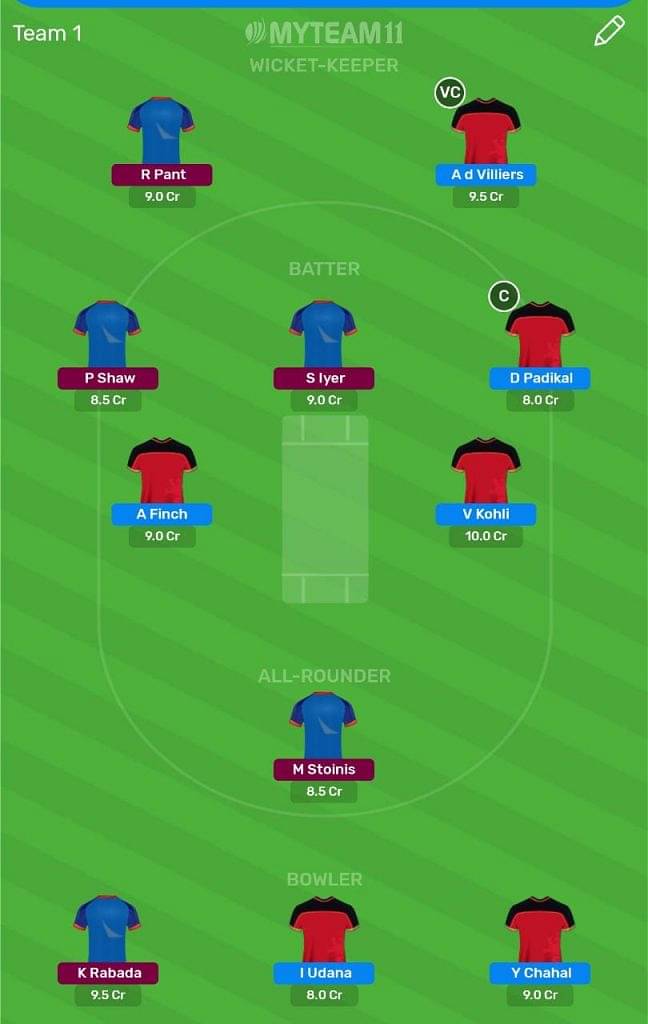 'You can only be a Sixth Man like Jason Terry': Kevin Durant mocks CJ McCollum on only way he could win NBA Title

Is Bhuvneshwar Kumar playing IPL 2020: SRH pacer ruled out of IPL 2020 due to thigh injury

Virat Kohli addressed the press ahead of the mega game against Pakistan, and he did…