Virat Kohli’s blatant refusal to learn from his mistakes has seen him flounder as a captain persistently. The RCB captain once again ended up as the focal point of his side’s defeat against Kings XI Punjab on Thursday with his abject decision making being a massive setback to the side.

Its not something new from him though. Across the last couple of years, his stubbornness and rigidness has emerged in his side’s dwindling, something RCB were only able to play hide and seek with for so long in IPL 13.

From sending AB de Villiers out at number 6 to opting for Siraj and Washington over Morris and Chahal, Kohli did everything wrong at all the wrong moments against Kings XI Punjab. And his nonchalant shenanigans to smile and kid his way out of his botched decisions fail to disguise his complete lack of cricketing acumen with fingers being raised at his atrocious decisions.

Luckily for him, his side looks a massively improved setup this season. It’s a well functioning side largely, one which has managed to work its way around Kohli’s inexplicable captaincy, a team which should have little qualms in defeating a Rajasthan side which just can’t seem to buy itself a win.

An afternoon tie will result in better batting conditions in the opening period but the surface will largely remain the same in the second half. It’s a track to come out to bat first on with the large boundaries and regressing quality of the wicket making chasing an improbable task.

With this being an afternoon tie, the players will end up being drenched in sweat at the end of play today.

Why AB de Villiers was asked to go out and bat at number 6 on a batting friendly wicket is something we are yet to work our head around. He smashed a scintillating half-century only prior to that contest, a knock which sees us repose faith in him for this one.

Jos Butler has failed to embark on a meaningful run of knocks this term. However, this RCB bowling unit can easily see him open his arms to crunch the ball to the fence to see him be our pick for today.

Its this sordid bowling unit which sees us opt for the side’s captain, Steve Smith as well, a side against which he can easily break free off his shackles to play some lusty blows.

RCB on the other hand see us immerse in the services of a trio for the upcoming contest. We begin with Devdutt Padikal who has set the league this season, a player who has taken to the competition like a fish takes to water.

Aaron Finch has failed to justify the staggering amount his side shelled for him but he’s looked good in bits and pieces to see us repose faith in him. Completing the trio is captain Virat Kohli who has played for personal goals this season, ones which have seen him accrue runs for his own tally rather than the side’s cause.

Opening for Rajasthan the side time this term, Ben Stokes justified the move by the club with a solid knock against Delhi, one which almost saw his side pull off an elusive win. RCB on the other hand see Chris Morris make an advent into our side with the South African needing all of three fixtures to look every bit the part he was reigned in for.

Jofra Archer ended up helping himself to three strikes against Delhi to make the Rajasthan spearhead an instant pick for us. RCB on the other hand see spinner Yuzvendra Chahal make an foray into the fray of our side given the variations and deviations he got on the ball in the final over against Punjab.

We are pairing him up with speedster Isuru Udana who has got the ball to talk and move away from the batsmen.

RCB Bat First: Kohli will bide his time to fill his shoes with runs to see him captain our side while AB de Villiers is the vice-captain.

RR Bat First: The same set of picks as aforementioned with both these names set to flourish in a chase as well. 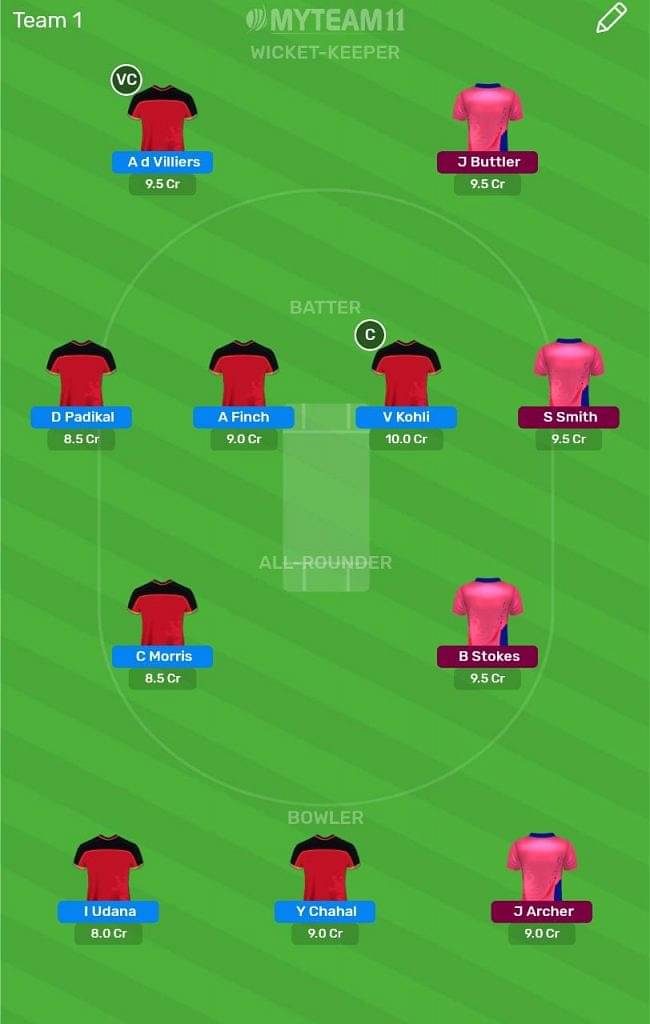 Most runs in WTC 2021: The SportsRush present before you a list of highest run-scorers…