Description: RR Vs DC MyTeam11 Team Picks, Pitch Report, Probable Playing 11 And Match Overview: Delhi look to assert their position in the pinnacles of the points when they take on a floundering Royals setup.

Rajasthan Royals would have been awaiting this fixture for a long time. This is the only venue where they have tasted consummate success, a track where the side went onto register two wins on the bounce.

Ever since the club has shifted away from the flat track, the team has been devoid of wins in IPL 13. From holding a runaway lead atop of the league standings to currently losing three ties on the spin, the Royals have completely fallen apart, a team which is collapsing like a house of cards.

For Rajasthan, this encounter is a behemoth affair also due to the identity of the opponents they are coming across. This faceoff between the two neighbours is touted as a battle for the Northern belt of India, a clash where a win for Rajasthan could end up rekindling a season which is fast running out of steam.

Where nothing is going the Royals, Delhi Capitals on the other hand are only going from strength to strength. Sitting in top spot with four wins from five fixtures after trouncing RCB, this Delhi side has taken on the shape of a juggernaut, a team which has gone straight for the jugular.

On conditions where every single run will be worth gold, Delhi’s more well endowed bowling unit will see the tie sway in their favour.

The most pristine track to bat on, this is  surface which has seen the team bat first set scores in excess of 200 on all four occasions. Setting a target and putting the opposition under pressure is the way to go here and the team winning the toss is set to do the same.

Not much change in the weather conditions with usual excruciating heat awaiting the players.

From being the talk of the town after the first week to being dismissed for 0 in his foregone affair, Sanju Samson is fast regressing. However, this is the track where he piled on those stellar knocks, a surface which will favour his free hitting brand of cricket.

After failing to settle into his groove for three matches in a row, Jos Buttler knew he had to start earning his living quickly. And he did exactly that with a 70 run knock against Mumbai to make him our second pick in this docket.

Rishabh Pant has far from sizzled but he hasn’t fizzled either. The Delhi wicket-keeper has managed to play some crucial quick innings in the tailend of the innings to see him make a foray into our side.

Steve Smith has not looked himself this season. The Rajasthan captain has jabbed at deliveries, trying to conjure up shots rather than connecting the ball on its merit to see him flounder in form.

It’s the track which sees us opt for him, one where the ball will come onto the bat nicely to allow him to hit it sweetly.

Delhi Capitals on the other hand see us reign in an entire triad of picks. With Rajasthan’s bowling setup making for one of the dreariest setups in the league, Delhi know they can easily tear their opponents into shreds today.

Completing the trio is Shikhar Dhawan, someone who will be itching to convert his starts into a big score today.

Marcus Stoinis is turning out to be a real prized asset for Delhi this season. He exploded for his second 50 of the season the last time around, a player who is in fluent touch with both the bat and ball this season.

Kagiso Rabada is doing all the work for Delhi at the moment. He snagged four wickets the last time around to emerge as the season’s leading wicket taker, a player who’ll be yearning to hold onto his Purple Cap.

Anrich Nortje at the other end is offering him the pinch perfect assistance. The speedster has turned out to be a real find for the capital based side, scraping two wickets the last time around to make him complete the duo from the club.

Elsewhere, Jofra Archer’s newly found ability to crunch the ball to the fence sees him wrap up our set of picks for the affair.

DC Bat First: With overs in his kitty, Shreyas can go on a rampage to see him captain our side while Butler is the vice-captain.

RR Bat First: Butler and Samson will love the free hand they get to see them be our captain and vice-captain respectively. 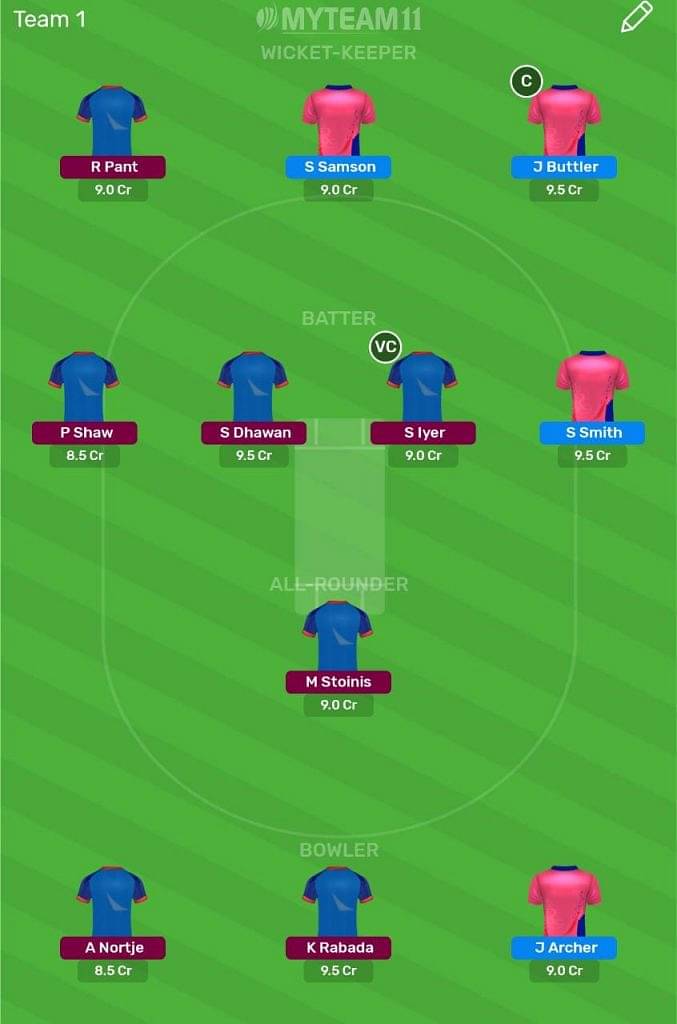 'LeBron James is the GOAT, not Michael Jordan': Isiah Thomas explains why Lakers star is better than MJ