There’s a reason why Sunrisers Hyderabad have over the years emerged as a club to be held in such reverence and esteem. Languishing in the trenches of the points tally at the halfway mark and seeing a bevy of players depart due to injuries, SRH found everything stacked up against them.

With absolutely nothing swinging in their favour as they found their season collapsing like a house of cards, nothing but a heroic effort was going to turn things around for SRH. And miraculously, the club managed to claw itself out of the soup it was embroiled in.

With three wins on the spins, a period which entailed triumphs against Punjab, Mumbai and Delhi, SRH are now no longer considered as mere fillers. When the club goes clashing heads with Royal Challengers Bangalore today in the eliminator, many are touting the club to pull through and seal their berth into the second qualifier.

Its not only SRH’s renaissance which has given birth to the narrative but RCB’s horrendous form as well. With four defeats on the spin after being sent home packing by Delhi the last time around, RCB found themselves extremely fortuitous to make it into the playoffs.

However, they club has pushed its luck way too long, one which will finally run out today with SRH coming out on top in the contest.

Although the track has had a couple of days to breathe, nothing which will change when these two sides step out for the clash. It’s a slow, sluggish and spin friendly surface, one where the team winning the toss will be looking to step out and chase.

A slight dip in temperatures but nothing too much to disguise the scorching heat.

Coming out a time when his team found himself in a quagmire, AB de Villiers managed to hold fort and script together 35 crucial runs for his side to show he’s more than just a player who is coveted for his lusty blows.

Josh Phillippe has turned into more than a useful player for RCB. Ever since he’s been asked to open the batting for the club, he’s given his side a new dimension, a player who has crunched the ball right in the middle in the powerplay overs.

Devdutt Padikal joins up with the two with the opener smashing a 50 run knock against Delhi, an innings which joined the ever growing pile of illustrious innings from his bat with captain Virat Kohli joining him. Sunrisers Hyderabad on the other hand see us roll in David Warner who is taking the accountability of leading his side’s charge into the finals as he thumped home an 85 run knock against Mumbai.

That innings peddled out a 10 wicket win for his club, one which saw Kane Williamson and Manish Pandey spend time in the pavilion. Relatively fresh and stepping out for a gargantuan affair, the two will be eager to apply themselves and settle down at the crease to move in unison and win this contest for the side.

A player who has played an integral part in his side’s renaissance is Jason SRH’s Jason Holder. Ever since he’s been brought on by the side, he’s completely overhauled the club’s bowling unit with him snagging wickets at regular intervals for the side.

Given RCB’s vulnerabilities infront of the slower stuff, Rashid Khan can end up wiping the floor with them today. The SRH spinner has been the most lethal spinner this season, a spinner whose deviations and grip on the ball have left batsmen in a quandary.

Sandeep Sharma is in the form of his life at the moment. He’s spearheading SRH’s quick bowling docket, a player who has set the stage alight with him variations, versatility and ability to get the ball to stop and come onto the bat.

RCB meanwhile will see us indulge in the services of spinner Yuzvendra Chahal with the spinner being their best bet with the ball this term given his ability to entice batsmen into the false shots.

SRH Bat First: The manner in which Warner is hitting the ball out of the park sees us captain him for today while AB de Villiers is the vice-captain.

RCB Bat First: We are going to be opting for the same picks as aforementioned due to a lack of better picks. 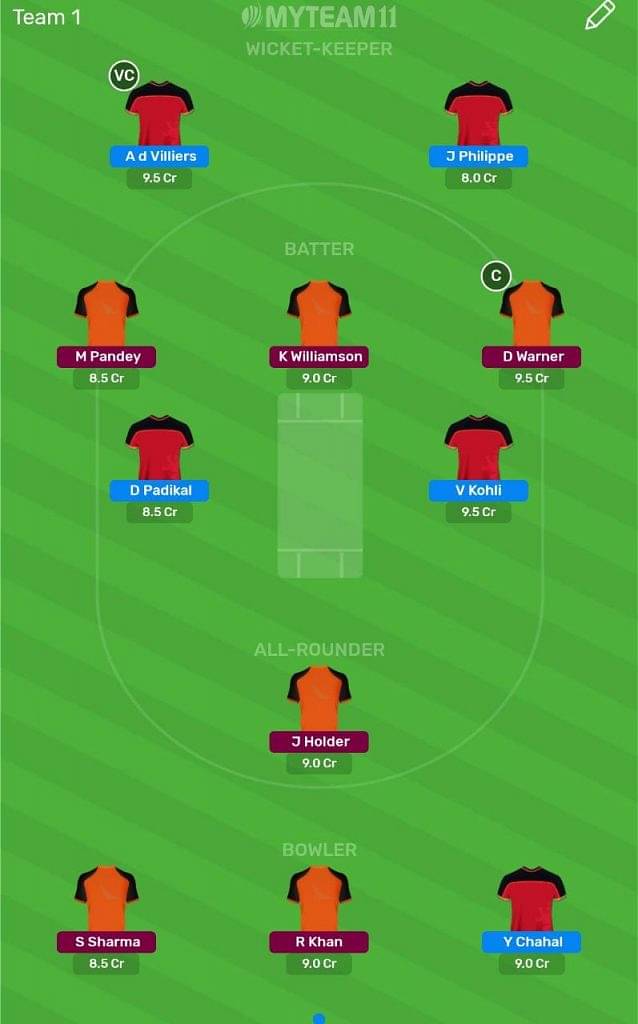 Keshav Maharaj hat-trick: The South African spinner has become only the second bowler from his…