A clash which has traditionally been a humdinger of a contest between two neighbours is all set to get further heated given the form these two clubs find themselves in. Languishing in the trenches of the points tally, for either side, a win today takes paramount precedence not only owing to a triumph over a hated rival but also given the two points at stake.

Sunrisers Hyderabad will be beating themselves over the manner in which they managed to throw away their bygone clash. Looking set to canter their way to a triumph against Rajasthan, SRH allowed the last established partnership of the Royals to clinch a win from the feisty claws of defeat.

It was a calamitous bowling effort by the side in the death overs, a howler of a performance which alluded towards the team’s jittery form in this edition of the marquee league. The team has persistently been bogged down by lacklustre bowling efforts with injuries further weakening an already paper thin bowling unit.

While SRH are struggling to embark on a winning spree, CSK have been devoid of wins altogether. The side has a measly two wins to its name in 8 fixtures, a team which needs to treat every clash as a must win outing from now onwards.

On a surface bound to favour the better batting unit, its SRH’s repertoire in the slot which will see them emerge with a win today.

A typical wicket to bat first on, the figures tell the same story. With the surface developing cracks and detreating as the match runs its course, the team winning the toss is bound to step out and set a target today.

Nothing changes with hot conditions awaiting the players out in the centre today.

Jonny Bairstow from SRH will be inducted into our setup as the wicket-keeper for this clash. He’s yet to emulate the same form which saw take control of his side in 2019 but he’s started coming good off late to offer glimpses of the same form.

Partnering him up is counterpart David Warner. The opener has been his side’s most flawless and consistent bat at this stage, someone who has made the most of the powerplay overs he’s stepped out in to crunch the ball to the fence.

Manish Pandey’s 54 run knock was hardly useful the last time around with him taking way too much time to get going. However, with runs under his kitty, he might explode come today to see him become the second pick from SRH.

With two scores of 20 in quick time, Kane Williamson is showing why he’s considered one of the most well rounded batsmen in the fraternity. He’s shown he can do it all from holding fort to taking on the bowlers to see him wrap up the trio from SRH.

After a string of lopsided and lacklustre outings, ones which asked for his ouster from CSK’s setup, Shane Watson has rediscovered his touch. He’s currently one of the finest bats in his side with his runs being a silver lining in another dismal batting unit.

Top scorer, Faf du Plessis will link up with him for the forthcoming showdown.

The incredible ripples he’s sending across the league with both the bat and ball in only his first season at CSK make Sam Curran retain his place in our setup.

This surface is one where Rashid Khan can end up wreaking havoc. Its becoming increasingly cumbersome squaring off against him with the surfaces declining and aiding his brand of wicket to wicket spin.

T Natarajan has made people turn and appreciate his composure and ability to hit the perfect lengths to see him send down the most number of yorkers in the league. CSK on the other hand will see us rope in Shardul Thakur with his ability to work his fingers around the ball seeing him lure batsmen into going for the false shots.

Deepak Chahar completes the one-two of picks from the side with the nature of this track set to be one which plays out to his strengths.

CSK Bat First: Faf can easily go on rampage today to see him be our captain while Warner is our vice-captain.

SRH Bat First: A nice and solid surface will see Warner peel the ball to the fence to see him captain our team with Faf being the vice-captain. 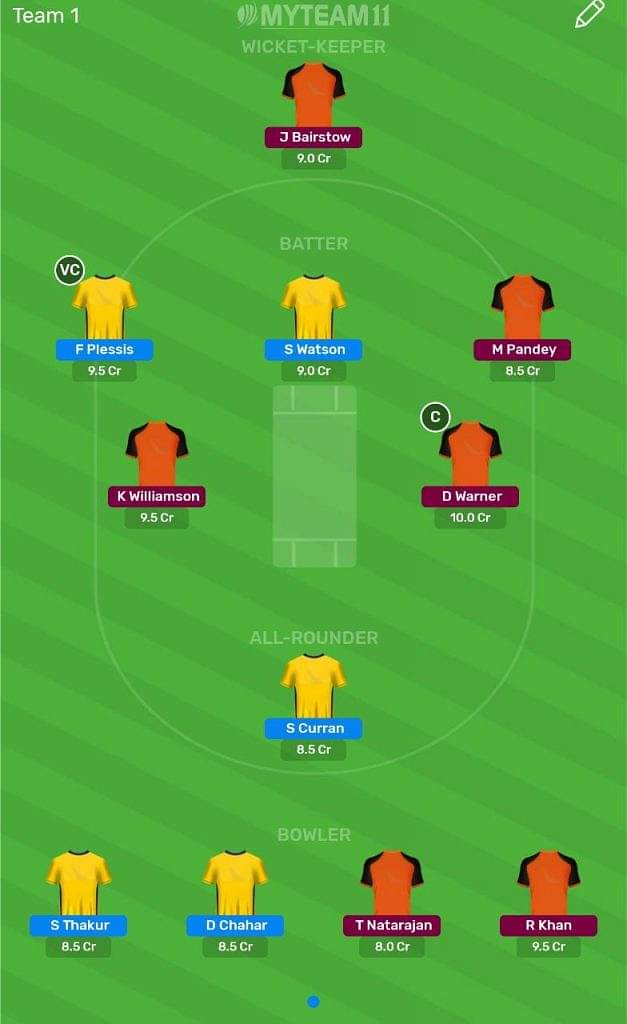 Will DeMarcus Cousins get a ring from the Lakers after NBA Title win? Anthony Davis' gesture suggests so

Most wickets in WTC 2021: The SportsRush present before you a list of highest wicket-takers…