STH Vs KOL MyTeam11 Team Picks, Pitch Report, Probable Playing 11 And Match Overview: Two regressing outfits look to stem when they take on each other in the league today.

This encounter between two waning sides in the Indian Premier League might be lacking on quality but by no means will it lack in competitiveness and feistiness. When two starts waning in the points tally take on each other today, the incessant need for two points will see us be engaged in an edge of a seat thriller.

Stepping out onto the field to partake in the first tie of this Sunday, Sunrisers Hyderabad know another defeat would be extremely detrimental to their ambitions of making it into the top 4. Despite being laden with a worldclass batting setup comprising of some of the finest batsmen out their in the world, the side has failed to make its repertoire count.

It’s the bowling side of the game which has left them downtrodden, a unit which has never been able to recover from the bout of injuries striking it earlier on in the season. However, despite this plight, today’s outing is an extremely achievable one for them given the dismal quality of their opposition.

On a sorry batting surface, its SRH’s batting order which gives them a clear edge. The side has the capability to dig in deep and we see them grinding out crucial runs to just about squirm their way to the two points on offers.

The fact that this is an afternoon clash will have little bearing on the fixture. The surface hasn’t changed since day one, a track quick to wane and regress in favour of the bowling side, one where the side winning the toss is bound to come out and bat first.

Afternoon conditions will only result in increased temperatures, a tie where the players will be tested to the fore.

A massive reason for SRH being such a dominant unit last season was due to their impeccable batting standards ingrained in place by Jonny Bairstow. His downtick in form has resulted in the team’s floundering form but up against one of the most ineffective bowling units in the league, we envisage him rediscovering his lost touch with the bat.

While Jonny has dipped in form, David Warner hasn’t let his standards drop one bit. The SRH captain has played an integral part with the bat with the opener ensuring his side are able to capitalise on the opening powerplay overs.

Kane Williamson showed what he can do when he’s accorded a proper chance out in the middle. The New Zealander went onto score a mammoth 57 runs the last time around, an innings which offered his side some kind of a respectable score on the board.

Manish Pandey has blown hot and cold way too often this season but come today, we envisage him playing a crucial role with the bat to see him join up from SRH. The opposition on the other hand see us reign in newly appointed captain Eoin Morgan with him flourishing in his new role the last time around as he put on 39 runs.

Shubman Gill has been inconsistent as ever this season as well but SRH’s bowling unit plays to hi strengths, ones which will allow him to free himself of the shackles he’s in to crunch the ball to the fence.

Andre Russell has not lived upto his stature one bit. However, he’ll still find a spot in our side due to a lack of better options and his explosiveness with the bat which always him a steady source of runs.

Pat Cummins has been completely flat and listless with the ball but he pulled off a real heist with the bat the last time around. He struck a half-century, one which accorded his side a total to fight for as he revived the side from a position of being bundled out for under 100.

On a wicket where the ball will turn, skip and hop in the spinners’ hands, Rashid Khan was always going to be an instant pick for us. T Natarajan has impressed everyone with his assiduous ability to hit the yorkers all across the tie to see him join up.

Khaleel Ahmed offers nothing as a bowler on the field but with batsmen looking to dispatch him to the fence on every delivery, he’s managed to snag wickets at regular intervals for the side.

SRH Bat First: Warner’s electric touch sees him captain our side while Bairstow is our vice-captain.

KKR Bat First: Warner will love a chase today to see us rope him in as our captain while Gill will be the vice-captain. 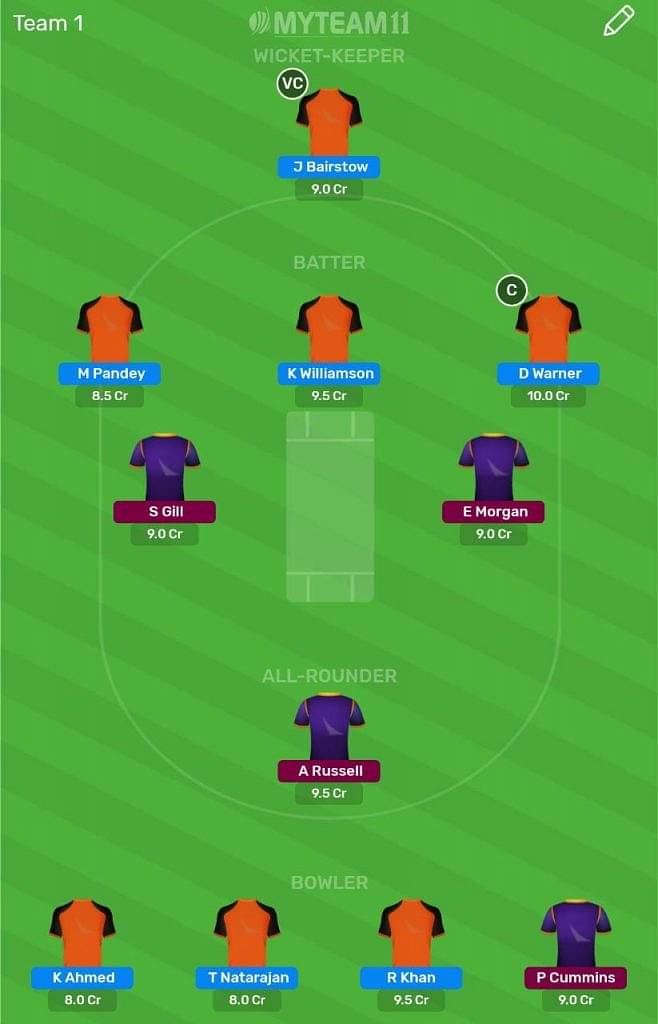