.This season is already looking to have run its race for Kings XI Punjab. Apart from that one win against RCB, the side has offered little in IPL 3 to go onto lose four encounters in four matches.

Its been yet another long and dreary season for the side, one where their inadequacies both on the pitch and away from it have stemmed the side from launching any kind of a challenge. As has become the norm at the club, the side’s team management has made one botched decision after another, ones which have thrown the side’s campaign in turmoil.

A complete failure to understand their best playing 11 and get the team combination perfect has bogged Punjab down all across the first couple of weeks. The side received the biggest defeat of the season in terms of wickets the last time around with CSK toying around with their bowling unit to dish out a 10 wicket thumping to Punjab.

Meanwhile, SRH have had their own contentious issues to navigate around. The team’s bowling unit has made for a drab unit, one which was drubbed by Mumbai who went onto hit it for over 200 runs.

That defeat was the side’s third in five clashes, a team which has looked one of the most appalling setups this term. In this battle between two of the worst sides this season, its Punjab’s bowling which slightly tilts the clash in their favour and should see them win the encounter.

The batsmen will have a solid batting track awaiting them in the first 20 overs. This is surface to step out and bat first on with the side chasing winning just once in 7 clashes, a wicket which tends to be on the slower side after the break.

Conventional weather conditions will take over with heavy winds blowing in the evening period on a largely hot day.

The current Orange Cap holder, KL Rahul scored 63 runs for his side in the bygone encounter to see him be our first pick for the upcoming contest. We have Nicholas Pooran join up from Punjab as well with the side’s wicket-keeper not only capable of adding the late thrust but building an innings and holding fort from one end as well.

Jonny Bairstow has looked a shadow of the player which was setting the league alight in 2019. While he’s managed to score runs, they have been way too inconsistent and well below the mark required from the opener.

However, his sprawling skill set can never be discounted and against this Punjab bowling unit, we envisage him coming out hammer and tongs.

What looked like a lost cause for SRH as they lost a string of early wickets on the day was resurrected only due to David Warner. The opener piled on a neat knock of 60 runs, ones which grew in stature given the gruelling circumstances they came under.

Kane Williamson has now failed in two ties on the spin however he’s not someone who remains out of form for long. Completing the trio from the side is Manish Pandey after his 30 run knock the last time around, one he’ll be looking to further build on come today.

Elsewhere, Punjab see us repose faith in the services of Mayank Aggarwal, the side’s second highest run getter at this stage.

Abdul Samad is turning out to be a handy player for SRH at the moment. Not only can he deliver a couple of overs with the ball but can wield the bat towards the tailend of the innings as well to see him be our lone pick in this slot.

Mohammed Shami went wicketless for the first time this season against CSK. That did little to quell our interest in him though with his variations on the ball paired with his role with both the new and old ball making him an instant pick.

Sheldon Cottrell is turning out to be way too expensive for Punjab’s liking. However, that narrative doesn’t stave us away from him with him likely to snare wickets as the batsman look to take him out of the park.

SRH see their spearhead, spinner Rashid Khan bring down the curtains on our MyTeam11 setup for the impending scrimmage.

SRH Bat First: Mayank’s consistency and ability to set the stage alight see him be our captain while KL Rahul is the vice-captain.

KXIP Bat First: The opening partnership has done all the work for Punjab and can string yet another massive knock today as well to see Mayank captain our side with Rahul being the vice-captain. 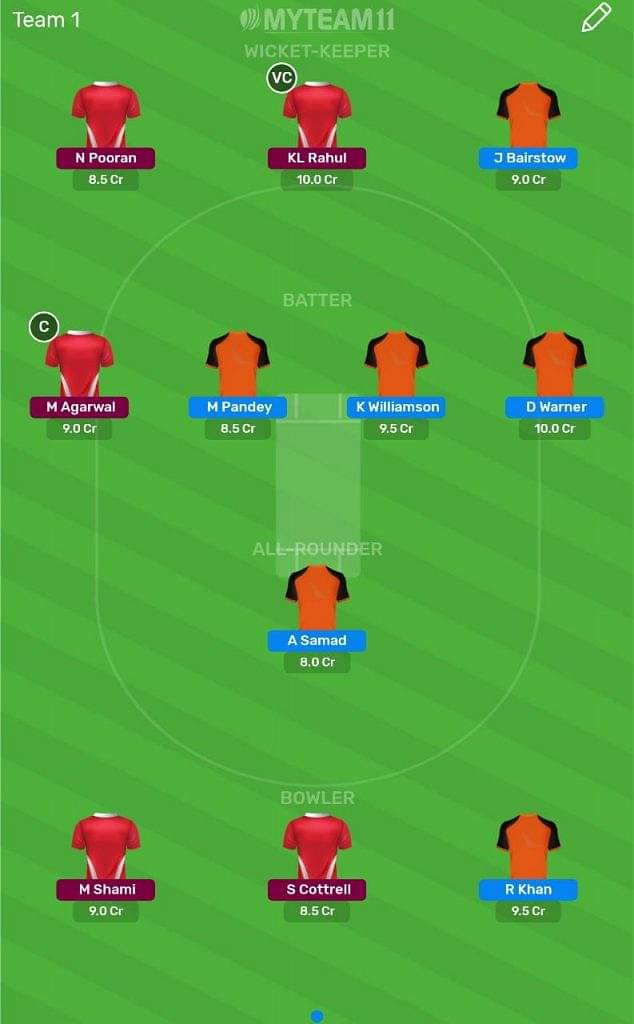 ENG vs WI memes: The defending champions failed to deliver as a unit despite the…