“The old Dwyane Wade would have flipped off the boat!”: Candace Parker hilariously roasts the Utah Jazz’s part owner on his recent Instagram post

Home » Basketball » “The old Dwyane Wade would have flipped off the boat!”: Candace Parker hilariously roasts the Utah Jazz’s part owner on his recent Instagram post

Dwyane Wade may have retired a while ago now, but the man has hardly had a boring life after the NBA.

To start things off, he tried being an NBA show host, joining the Inside Crew on Inside the NBA. And while that can’t be put among the greatest of successes, the former Heat player wasn’t bad at all. In fact, in a different environment, many fans can even see him being successful in the industry.

Since leaving the show though, Mr. Wade has made some savvy business decisions as well. Despite being a Miami Heat legend, he saw the Utah Jazz on the rise and chose to become part-owner of the franchise, and even mentors Donovan Mitchell in any way he can.

And now, during the offseason, the former player seems to be practicing to be a stuntman, as he posts a pretty cool video of himself jumping off a boat into the ocean.

While most of us find it exciting to see though, it seems Candace Parker just isn’t impressed. In the comments section of the very same post, she had a scathing, yet hilarious roast waiting for D Wade.

Also Read: When Vince Carter admitted that the NBA encouraged him to let the Bulls legend get his final moments with his fans

“The old Dwade would have flipped!”: Candace Parker teases Dwyane Wade about his new habits

Candace Parker and Dwyane Wade have been close friends for a while now. But, the NBA community was fairly oblivious to this fact, until they co-starred on Inside the NBA. They spoke about being as close as siblings over and over again on the show. And frankly, their wholesome relationship was really fun to watch.

Even with neither party being on the show, however, they have continued to keep the same energy towards each other. And yet another example of this came very recently. Take a look at the picture below. 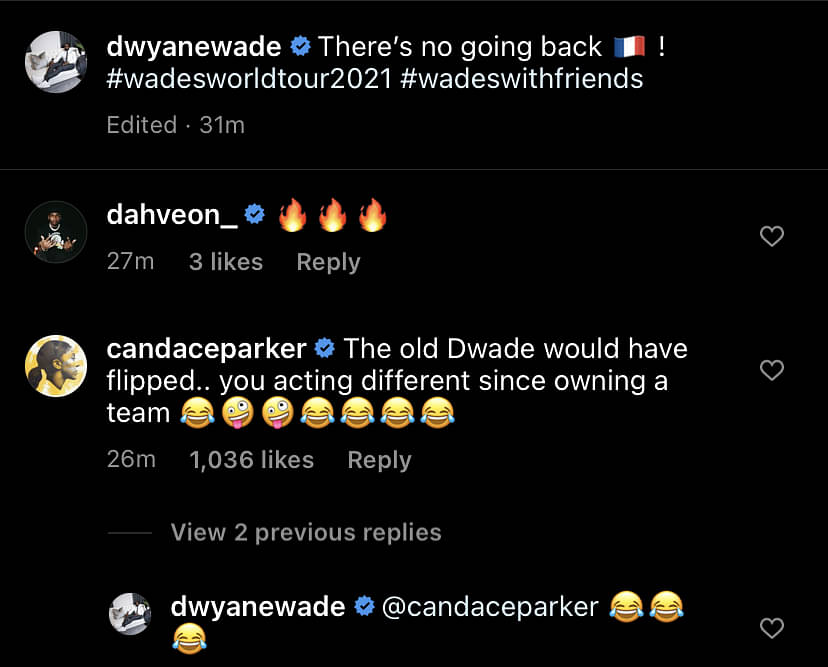 We can’t tell if this is an age joke, a joke on how classy he has gotten since becoming part-owner, or both. But either way, we love it. And we’ll be looking forward to more jokes like this between the two.

Also Read:  Shaquille O’Neal describes how he made the decision to release low-cost shoes with Walmart

I've always been someone surrounded by sports. At 15 though, Basketball was brought to my attention, and I absolutely fell in love with it. At 21 now, I look to share the joy I feel with the world through my articles.

“Isiah Thomas is the greatest pure point guard of all time!”: When Charles Barkley snubbed the likes of Steve Nash and Chris Paul during Michael Jordan’s ‘Last Dance’ docuseries