Harshal Patel IPL 2021 wickets: The uncapped Indian fast bowler has picked the most number of wickets in an Indian Premier League season.

It was roughly three weeks before Indian Premier League 2021 auction that Royal Challengers Bangalore had announced the signing of two players from Delhi Capitals making full use of the trade window. After confirmed a deal with Delhi Capitals, RCB had acquired the services of Australia all-rounder Daniel Sams and uncapped India fast bowler Harshal Patel.

Sams, who picked combined bowling figures of 6-0-39-1 and scored 3* (2) and 3 (4) in the two IPL 2021 matches that he played against Delhi Capitals and Punjab Kings, opted out of the second leg of the season to priortise “mental health”.

Patel, on the other hand, not only picked wickets in double digits for the second time in his IPL career but went on to pick the most number of wickets in an IPL season to justify his trade from Capitals.

Harshal Patel had the most wickets in an IPL season (in my heart).

Patel, 30, was phenomenal when it came to deceiving the batters with slower balls throughout the season. The fact that Royal Challengers captain Virat Kohli preferred Patel over a capped pacer in Navdeep Saini speaks highly about his current form.

With Bangalore no more part of the tournament, Patel’s won’t get an opportunity of surpassing veteran Chennai Super Kings all-rounder Dwayne Bravo. Having said that, Patel equaling Bravo’s record is in itself a monumental achievement. 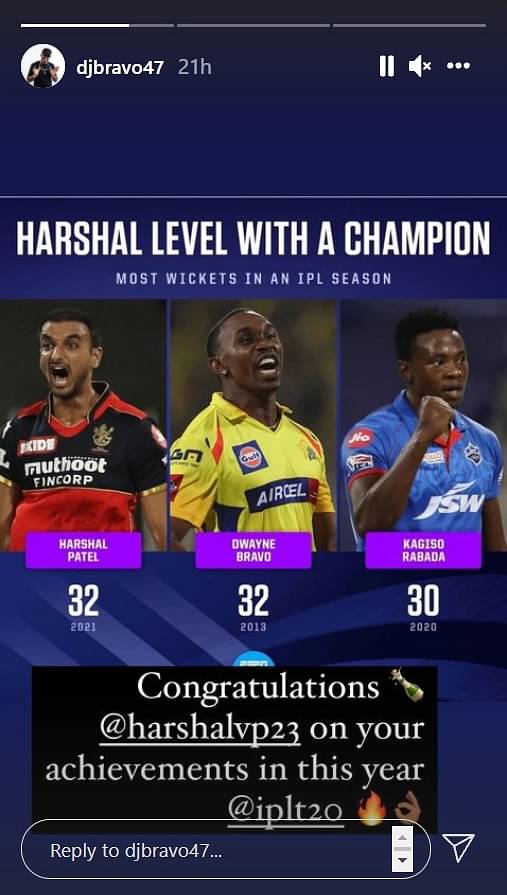 Bravo took to his social media platform Instagram to upload three stories with respect to Patel congratulating the bowler for a stellar IPL season.

Devon Conway’s airborne catch: The batter from New Zealand contributed significantly on the field at…