Cyberpunk 2077 like any other game is undergoing a content cut before the release of the final game. Concerns were raised by fans over this and lets take a look if we should be concerned

Cyberpunk 2077 is the most awaited game of the year so far. With preorders selling fast and getting out of stock, a genuine concern was raised some time back. It was reported that the final game would not have the entire content. Some content would be cut from the final game. 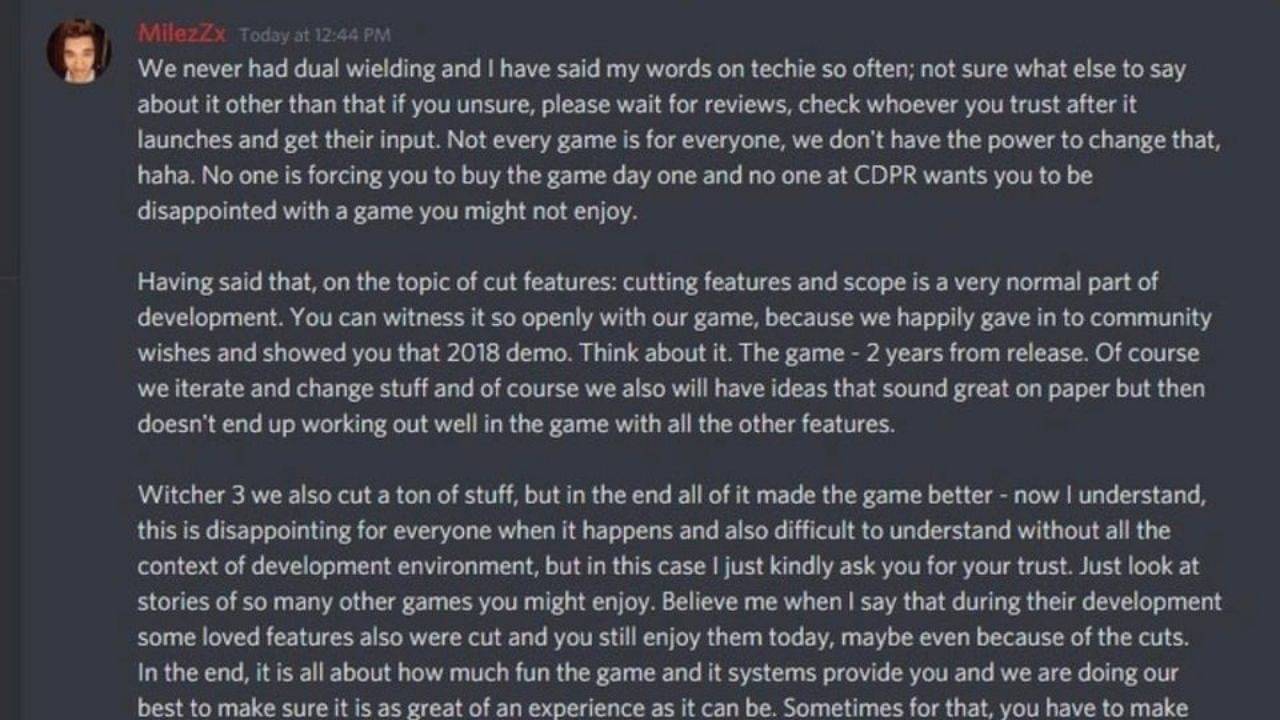 Designing a game is a very strenuous process. Just like a draft of a book or a music album many times some of the content in a game is edited out. This doesn’t make it to the final edition of the game.

With preorders of Cyberpunk 2077 selling fast many were concerned over this issue as same was the case with Cyberpunk 2077. But senior designer Miles Tost defended this decision.

Miles Tost released a statement on Cyberpunk 2077’s discord server. He addressed the concerns and reassured the fans of transparency. “Cutting features and scope is a very normal part of development,” Miles said.

He further added that no one at CD Projekt Red wanted the fans to be disappointed with the final game. Here is the full photo of what Miles had to say –

With what Miles said players and fans should not be concerned over this issue. With CD Projekt Red being a reputed game studio they can be trusted to deliver on all the hype the game has generated. The game is going to be shorter though. It is already announced that Cyberpunk 2077 is shorter than Witcher 3.

However it is going to be more immersive and customizable experience. The reason given for this is most players did not bother to complete all the quests in Witcher 3.

Cyberpunk 2077 launches in close to 20 days and the excitement maong the community is palpable. With preorders selling like hot cakes one can only wonder if it is going to be the most successful game of the year.

Related: To know more about preordering the game click here.

#Cyberpunk2077 is exactly 1 month away! 🔥 pic.twitter.com/ziBpRpNnTq

'LeBron James won't play first month of next season': Danny Green on why Lakers star will sit out start of new season