“Don’t read what I was saying wrong yesterday”: Lewis Hamilton clears the air around the comment he made about Sergio Perez after the Mexican GP

Home » F1 » “Don’t read what I was saying wrong yesterday”: Lewis Hamilton clears the air around the comment he made about Sergio Perez after the Mexican GP

Lewis Hamilton comments after the Mexican GP which he feels got misunderstood. The Mercedes driver took to Instagram to clarify.

Lewis Hamilton finished the race in Mexico on Sunday in P2 behind Red Bull’s Max Verstappen. He had a harrowing battle with the second Red Bull driver Sergio Perez who was hot on his tail for the last few laps of the race.

Ultimately Hamilton managed to keep the Mexican driver behind him but the encounter with Perez left Hamilton with lots to say about the speed of the Red Bull cars.

Also read: Mercedes boss unhappy with his driver’s effort to block Max Verstappen in the first lap of the Mexican GP

After the race, the Briton went on to say: “I started second and finished second, so I can’t complain,” Hamilton told Sky after the race. “[I] got a really start and I feel like I maximised it with what I had.”

“But jeez, their pace, it was just unbelievable today, and there was nothing I could do to battle that – and when you’ve got Checo [Perez] on your tail, then you know the car is quick.”

Netizens believed that the defending champion was throwing shade on the Mexican driver who secured P3 in his home race.

“Just want to make sure people don’t read what I was saying wrong yesterday. I have a lot of respect for Sergio Perez and I think he’s doing a great job in his new team.” 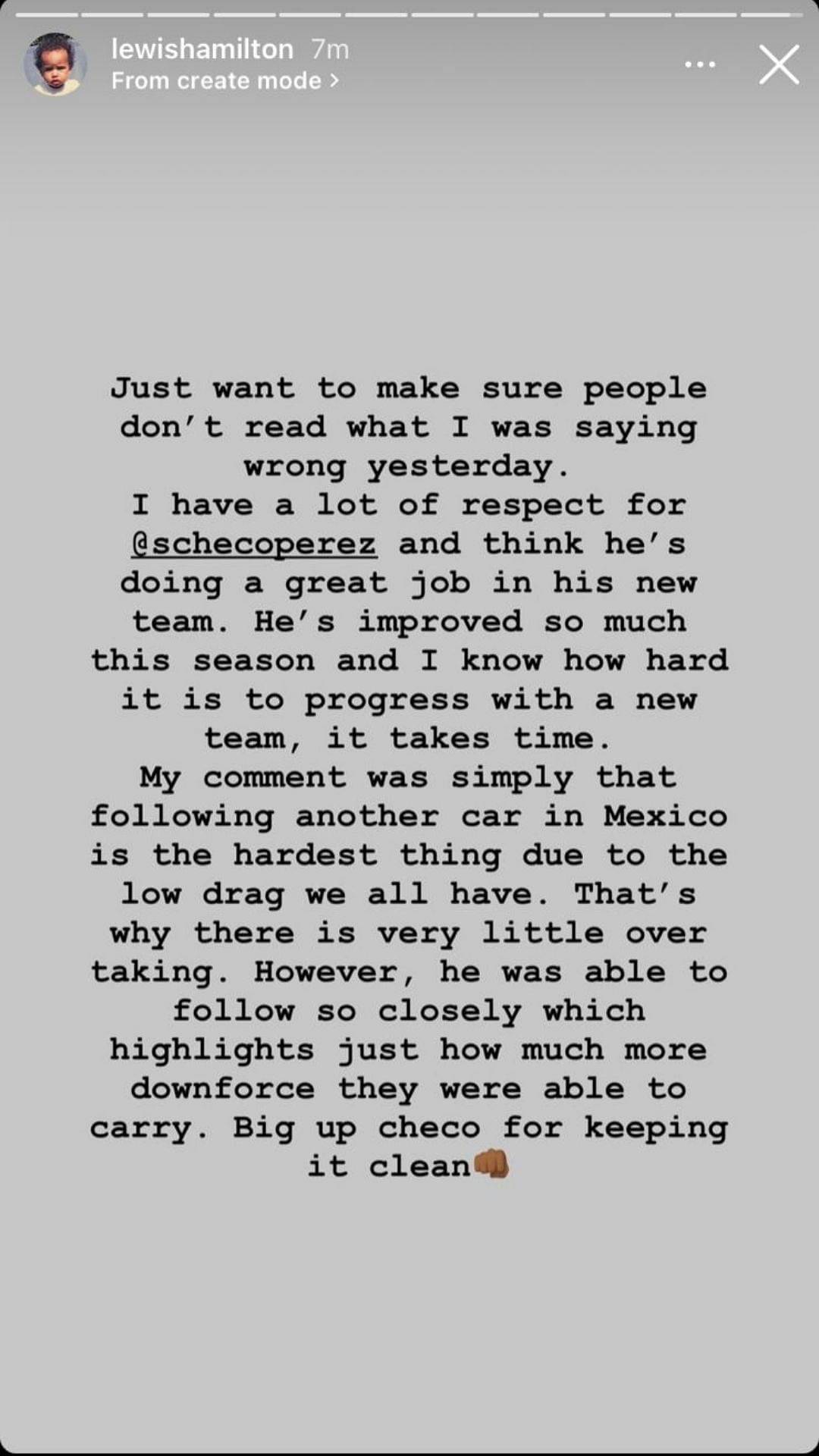 Mexico ‘No bueno’ for Lewis Hamilton

Hamilton praised Perez’s time at Red Bull and made it clear there was no disrespect in what he said.

“He’s improved so much this season and I know how hard it is to progress with a new team. My comment was simply that following another car in Mexico is the hardest thing to do due to the low drag we all have.”

The Autodromo Hermanos Rodrigues in Mexico sits at a whopping altitude of 7,342 feet above sea level which means the air up there is quite thin compared to tracks around the world. This in turn makes it difficult for cars to create downforce.

“That’s why there is very little overtaking. However, [Perez] was able to follow so closely which highlights just how much more downforce they were able to carry.

Finally, he signed off wishing the Red Bull driver well and congratulating him for a well-fought battle.

“Big up, Checo for keeping it clean.”

The next race which is in Brazil is also at a high altitude but Mercedes hope they will fare better than they did in Mexico.

Also read: A day to forget for Valtteri Bottas as Mexican GP turns out to be a mostly downhill roller-coaster

Simple in Stockholm Major : The Journey of s1mple from humble beginnings to first major win.