“He always needed to adapt to the car”– Why Ayrton Senna’s successful early 1990 style wouldn’t have worked in today’s F1?

Home » F1 » “He always needed to adapt to the car”– Why Ayrton Senna’s successful early 1990 style wouldn’t have worked in today’s F1?

The distinctive Ayrton Senna’s aggressive driving style which helped him win three titles may not be successful in the contemporary era.

Ayrton Senna is regarded among the best Formula One drivers of all time. There was nothing more distinctive than his driving style that kept the audience keeping their eyes peeled while watching him race.

Due to regulations and technology, Senna had to adapt to changing designs of cars from the start of the turbo era and during his stint in Formula One.

The transition from ground effect driver aid turbos to paddle-shift gearboxes is a major change to get used to, and each of these cars demanded quite distinct driving techniques. The famous Youtuber Driver 61 explains why Senna wouldn’t be successful in today’s time.

While every car required a different driving style, Senna was always seen as a very aggressive driver and that was true throughout the race.

He would break late as he approached a corner and then use what we term high-frequency throttle stabs in the corners. While in the middle of a turn, the Brazilian would continually stamp on and off the gas pedal, and after exiting the corner, he would have a terrific release.

What are the key differences between classic and new generation cars?

The classic 1980s – 1990s era cars were very simply constructed and relied on engine power more than linear suspension or aerodynamics. The drivers were not worried about the grip of their tires.

Senna was just using this weird throttle technique to keep the boost pressure up so that when he did get on the throttle properly coming out of the corner his turbo was producing more boost than the competitors very clever that and it must have been incredibly hard to do but of course he was at and seller.

However, the 2014-21 turbo hybrid which is technologically advanced and more powerful cars have aerodynamics, chassis, suspensions all working together helping improve the speed of the car on the track with tire grips being one of the biggest key points.

The shift of Focus from Power to Tire Grip

In the Senna era, the engine was the focus. The wearing of the tires did not make the drivers lose seconds than they do now.

As the fastest cars are on the field tire wearing out after laps can impact milliseconds of loss leading to a shift in the standings. Tires are a much more important part of the sport and the cars are tuned around based on their reliability of them.

If today’s drivers tried the Senna like late-breaking on the corner, they would run straight to the barriers due to the car’s program not providing any feedback to the steering wheel and the tires would not even last longer than 3 laps.

Why is Ayrton Senna’s aggressive style not followed anymore?

Back in the 90s and 200s, fans could see the difference in driving style between the drivers. However, in 2021, all Formula 1 drivers right from Hamilton to Mazepin drive very similarly despite setting up new track records.
The days of drivers veering off the road are long gone. They’ve switched to racing lines, which are significantly smoother and faster. As shown in the diagram below, the red arch is slower and more aggressive, resulting in more corner crashes. The current drivers employ the green line, which allows them to be swift and smooth while coming out of the corner. 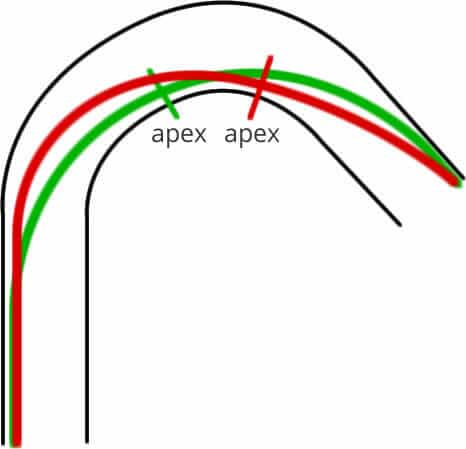 All drivers have adopted the same style in terms of steering braking and acceleration inputs as the cars are well-tuned and the regulations have made them alike.
Research and innovation have helped create cars catering to each driver, stable for the airflow and the weight load to individual tires is very balanced. The grip of the cars has increased over the power of the engines and the drivers focus on getting the best out of the tires.
Also Read: Lando Norris on why McLaren fell off in the latter half of the 2021 F1 season

Secondly, the data and simulations have aided drivers in determining the quickest route to take. Drivers simulate races in their factories with the use of reliable circuit data prior to any race.

After completing a practice lap or qualifying lap, the drivers are given a wealth of information on their driving behaviour in straights and turns, allowing them to identify and correct their flaws.

This was not possible during the Senna era, therefore they had to rely on their instincts and drive around the track’s turns. Because it was difficult to figure out the quickest way to drive the car, some drivers pushed the pedal hard while others were cautious.

Although the Senna-like aggressive style would look unique and pleasing to the audience, it will not only impact the car’s reliability and also make the driver slower by a few seconds.

“Ja Morant goes out and is eating all of them up”: Isiah Thomas gives his flowers to the Memphis youngster while highlighting Ja’s fearlessness

“The best player in the world and LeBron James”: Nuggets Twitter trolls The King posting a photo of Nikola Jokic next to the Lakers superstar

Sergio Perez looked like he could have gone for the race win in Spain, but…