“I’m so gutted for Seb”– Lewis Hamilton sends a consolation message to Sebastian Vettel, who was stripped from his P2 win in Hungary.

Sebastian Vettel persevered through the initial chaos in the Hungarian Grand Prix and brought home a glorious P2 and his second podium finish of the season.

He was throughout the race was in a close battle with Esteban Ocon for the win, but his French counterpart held the pressure and forced him to settle with a P2.

A good result for Aston Martin, but it was soon snatched away, as the Silverstone based team failed to fulfil minor criteria– F1 rules dictate teams must ensure a one-litre sample of fuel can be taken from the car at any time during the event.

And the officials claim that it was possible to pump out only 0.3 litres from Vettel’s car. Therefore, leading to his disqualification later on Sunday night, and promoting Lewis Hamilton and Carlos Sainz to P2 and P3 respectively.

Aston Martin say they will appeal the decision after Sebastian Vettel was disqualified from the #HungarianGP https://t.co/xIv3wSkYH3

Hamilton with this recent elevation in position has received an extension in points against Max Verstappen in the drivers’ championship standings, but the Briton couldn’t help himself but feel sorry for Vettel.

“Lastly, I’m so gutted for Seb. It is always an honour to be on the podium with you. and you deserved this result. What you are doing at your new team is amazing, keep fighting and pushing. See you on track soon,” wrote Hamilton on Instagram. 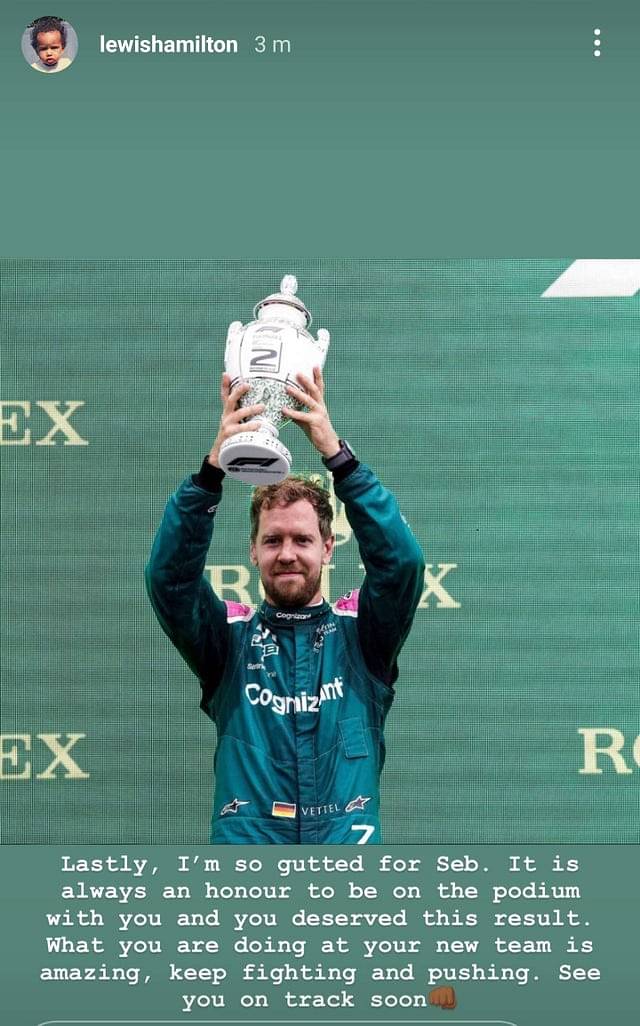 After the penalty, Aston Martin was quick to respond by claiming that the car had 1.44 litres of petrol remaining after the race, but the stewards could only extract 0.3 litres of petrol.

“So once we learn more, then if we have grounds we will appeal, and if not, we’ll drop it. But we have 96 hours. By all of our calculations, there should still be 1.44 litres of fuel left in the car after the 300-millilitre sample was taken.