“I’ve lost 6kg over the past two months – four of which when I got Covid”- Lewis Hamilton on how COVID-19 affected him physically.

Lewis Hamilton had an exhausting recovery from COVID-19, his struggles continued even after the elimination of virus from his body, as he told that he was physically not feeling good after the Abu Dhabi Grand Prix.

In the latest revelation by Hamilton, the Briton driver in an Instagram post has claimed that in the past two months he has lost six kilos, out of which four kilos were during his recovery from Coronavirus.

“I’ve lost 6kg over the past two months – four of which when I got Covid,” said the 35-year-old. “I’ve lost so much muscle. I’m starting from a low point in strength now, not fun but I’m determined to get my strength back and to be 100% again. No pain, no gain.” 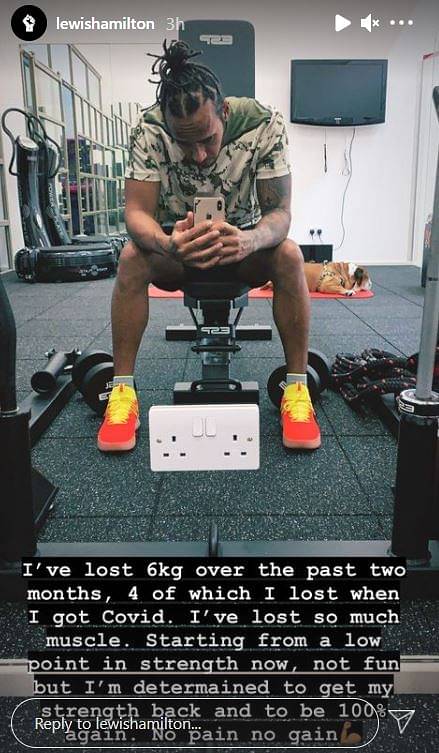 When Hamilton was put into quarantine after he was detected positive of the virus, the 35-year-old avoided any form of social media interaction, and only appeared for the first time a week later, where he gave his health update.

Three days later that public post, he made his public appearance ahead of the Abu Dhabi Grand Prix, in which he was given the green light to compete after testing negative.

Not a high end to the season

In the last race, Hamilton didn’t look sharp and ended up third in the podium, a rare spectacle by him in Abu Dhabi. Since the start of the hybrid era, Mercedes always started the race from P1 at Yas Marina, but this time it was Max Verstappen’s Red Bull, which eventually won.

I been thinking of all those who voted to support me last night, I am truly so grateful. Thank you to the British public for this honour, it means the most because it comes from you. I’m sending you all positivity. Thank you from the bottom of my heart. #SPOTY pic.twitter.com/yLs6znMFqK

But still, Hamilton had secured his championship weeks ago before this race, but now it is time for Mercedes to secure the services of its marquee driver for 2021, whose contract has technically run out.