“Courtside Karen is very lucky”: LeBron James reposts hilarious meme from Instagram feed on his stories after courtside faceoff with fan in Lakers’ win over Hawks

After a verbal standoff with a woman during the Lakers’ game against the Hawks last night, LeBron James reposted a meme about ‘Courtside Karen’.

The Lakers beat the Atlanta Hawks based on some good old defensive acumen. Both teams guarded well out on the perimeter, meaning that 3-point attempts were much fewer than in an average NBA game these days.

Although LeBron scored 21 points on the night, he didn’t shoot the ball that well. He finished with figures of 21 points, 9 assists and 7 rebounds on 5-of-12 shooting from the field. Anthony Davis was a whole lot better from previous games, making 10 of his 14 shots and totaling 25 points.

The difference-maker for the Lakers on the night was Montrezl Harrell. The Sixth Man of the Year contender shot 8-of-9 from the field and tallied 19 points on the night – a total that none of the Hawks’ bench players could match.

During the game, an uncharacteristically heated LeBron James seemed to have taken exception to a couple trash-talking him. Stadium officials removed the offending couple, comprising an Instagram influencer and her industrialist husband. She made the following statement about the kerfuffle:

“Just got kicked out of the game to for talking sht to LeBron James for talking sht to my fcking husband. This is such fcking bullsht. Listen, let me tell you, LeBron James looked at my husband during the game and cussed him out. And I stood up and I go, ‘Don’t fcking talk to my husband! Talk to my husband one more time and I will fck you up!’ And he started fighting with me, he goes, ‘Shut your mouth, dumb bitch,’ and I go, ‘You shut your fcking mouth btch.’”

Also Read: “Important to show that you care”: Russell Westbrook hands his game-worn shoes to Wizards employee after realizing he’s playing without spectators

James seemed to not have gotten over it all night. At around 1 AM by Pacific Time, James posted the following story on his Instagram. 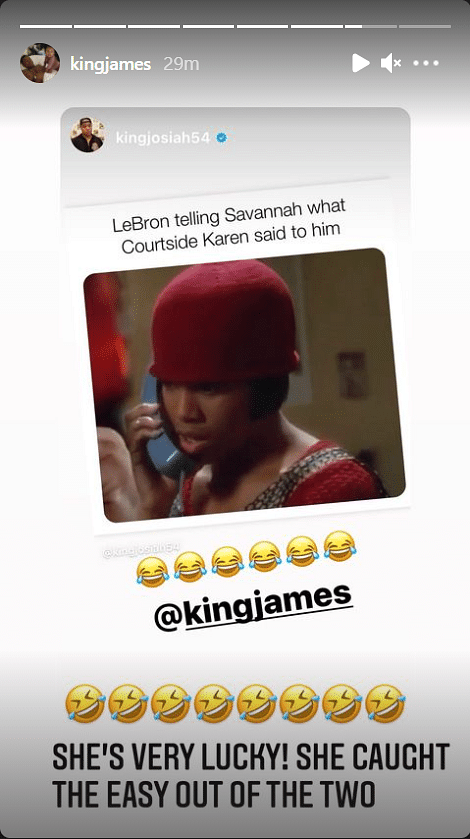 James is clearly enjoying having fans back in the arena. This was possibly one of the reasons he interacted with the hecklers the way he did – he missed their presence in games of consequence.

According to ESPN’s Adrian Wojnarowski, Andre Drummond has decided to split ways with LeBron James…