Shaquille O’Neal has never been afraid to share his opinion on the modern NBA. He placed LeBron James in his list of top 4 most skilled scorers.

LeBron James is the most prolific scorer in NBA playoffs history. The Lakers star is soon going to take the #1 spot in the regular season tallies as well. And yet, for some reason, when people list their best scorers of all time, LeBron’s name goes missing.

Shaquille O’Neal, however, won’t be making that mistake. The Lakers legend and 4-time champion is probably the most dominant player in the 3-pointer era. But he still places 4 wing players above himself as the 4 most skilled scorers of all time. 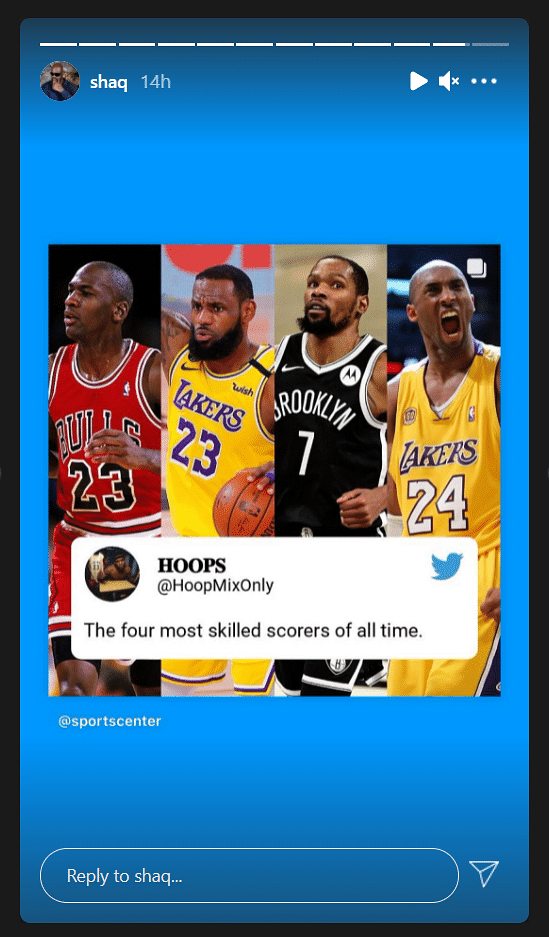 Also Read: “Why does LeBron James get to play above the rules?”: Kwame Brown goes off on Lakers MVP not receiving any punishment for violating the NBA’s health and safety protocols

In terms of Shaq’s usual takes, this is quite a safe one. LeBron James, Kevin Durant, Kobe Bryant and Michael Jordan are the 4 best wing players that most fans have seen in their lifetime. Picking them on such a list makes a ton of sense.

Does anyone have a case over LeBron James in top 4 most skilled players ever?

As you can see, Shaquille O’Neal has named LeBron James, Michael Jordan, Kobe Bryant and Kevin Durant as his picks. In most fans’ eyes, MJ, Kobe and KD are the default top 3 most skilled scorers of all time.

Number 4 is slightly more contentious. You have LeBron, who’s undoubtedly the most reliable scorer remaining from the rest of the field. However, in terms of skill, there are quite a few players in the conversation, depending on which generation you grew up.

Those who’ve been watching basketball from the 80s will definitely mention Larry Bird in the mix. 90s aficionados will bring Allen Iverson and Tracy McGrady into the mix, in terms of their peak selves.

There’s also Dirk Nowitzki, who changed the way the modern NBA perceived 7-footers. Dirk is no. 6 in regular season scoring all time, for good measure.

Also Read: “You knew what Michael Jordan would give us every night”: Phil Jackson explains how he drove the Chicago Bulls in his initial few months

"We are on the road with a legal car"– Red Bull defies Mercedes demand; will step with same car in Azerbaijan

"If Michael Jordan hadn't played under Dean Smith, he'd never have been a good team player": Hall of Famer Tex Winter reflects on what made the GOAT so potent for the Chicago Bulls in the triangle offense