“LeBron James, the humble bragger, always in the third person too! So annoying!” : Fans are tired of the quintessential King James quotes, more so after his post celebrating passing Karl Malone on the all time scoring list

Home » Basketball » “LeBron James, the humble bragger, always in the third person too! So annoying!” : Fans are tired of the quintessential King James quotes, more so after his post celebrating passing Karl Malone on the all time scoring list

LeBron James just passed Karl Malone in the All-time scoring charts – He now sits at number 2 in the rankings.

LeBron James is on a mission to cross Kareem Abdul-Jabbar as early as he can. In the loss against the Washington Wizards, the King made it not so obvious that he was out to hit his personal goal over the collective team effort to win. Languishing in the last place of the play-in spot, LeBron probably knows it would be better to drop out completely rather than dragging this pointless charade further.

The team is not built for a playoff series. It is highly dysfunctional and only doing the side quests matters at this point. Russell Westbrook crossed 23,000 points a few games ago, now LBJ becomes the second-highest point scorer. In typical LeBron style, his post about being thankful hit social media sites the next morning. The man deserves to be happy about his achievement no doubt, but doing it in his typical “humble bragging” nature irked a lot of the fans.

#ThekidfromAKRON is what he calls himself while crowning himself King was not pretentious enough. This man will never be in the good books of anyone but the Bronsexuals. Michael Jordan fans wait for every game to see how he can slip up each game, and it isn’t too difficult. Just ask Skip Bayless about how he does it.

Also Read: “Rafael Nadal is the GOAT”: Pau Gasol pays the ultimate respect to the Spanish tennis icon as he defeats Carlos Alcaraz to advance to the finals at Indian Wells

LeBron James is an athlete who takes to social media for just about anything. While to each his own, the cringe captions make it an eyesore to anyone who is not a fan. Writing captions like he is stuck on his Myspace Account from 2007, LBJ does not seem to tire of addressing himself in the third person. Terry Jeffords from Brooklyn Nine-Nine almost fell into hot soup by referring to himself in the third person. Luckily for LeBron, no one can confuse his trademark hashtag. 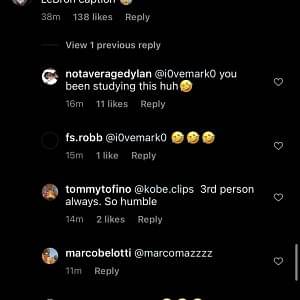 Los Angeles Lakers fans for long have been treated to the work ethic of the Mamba – the Hollywood nature of LeBron is jarring. While his talent backs up every claim of his and then some, these cringe quotes pull his stock down. It doesn’t seem to bother him though, because he’s been doing it since anyone can remember.

Hey Bron, there is one more kid, and he’s the best shooter ever.

Also Read: “Steph Curry’s form is nice and all but he’s got nothing on Bill Cartwright”: NBA Twitter erupts as the former Bulls champion’s shooting action goes viral on social media

Jack of all sports, master of none. But still, better than master of one. Except NFL. And MLB. And Fencing.

"When Pat Riley lost Tracy McGrady because Tim Duncan was on the verge of joining the Orlando Magic" : The Miami exec was so sure he had T-Mac in his bag, but one move scuppered his grand plan

Shaquille O’Neal is one of the icons of the modern era of basketball.  Shaq is…